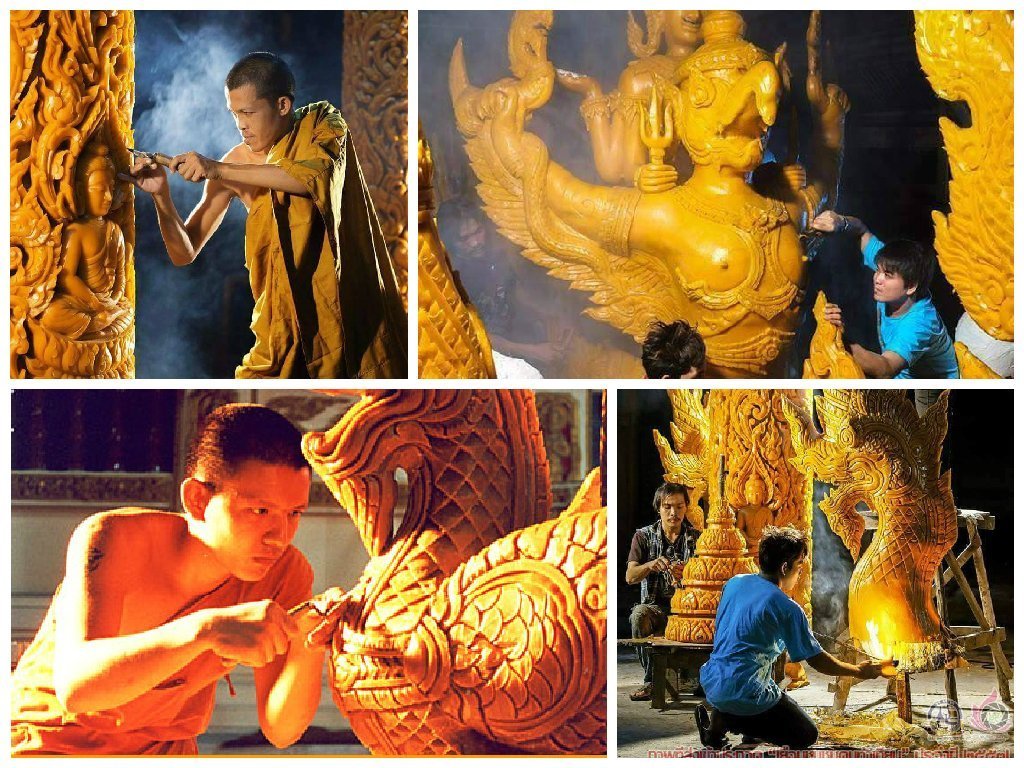 The Significance of Candles

Thailand’s Candle Festivals. Candles make up an important part of most Thai merit making and no more so on Asanha Bucha Day and the start of the Buddhist Lent period, both typically held in July each year,  this is also the traditional time for preparation for the rainy season. Merit making at this time of year comes with donating items for the personal use of the monks at local temple, these same monks who in turn will not leave the temples during this 3 months of Lent, these gifts include such things as clothes, food and candles.

This form of ‘merit making’ was and is still the core event of many village celebrations during Asanha Bucha Day, when the giving of candles and their use in the evening Candle Light Procession, the Wian Tian; where people will walk three times around a Temple in a clockwise direction, carrying a lighted candle, has formed the bases of these now major events.

Candle festivals take place right across North East Thailand, almost exclusively in July each year, prior to the 3 month Buddhist lent. It is believed the modern candle festivities have been taking place annually  for over 120 years.

During the reign of Rama V, in late 1893 the King appointed, Prince Sappasittiprasong, as the High Commissioner of the then fragmented regions of what we now call Isan, It was during this time the King was attempting to further increase the Siamese influence in the area and break the feudal system that then prevailed.

The young Prince made his home and the centre of the then Lao Kao Circle in the town of Ubon Ratchathani. During his time he witnessed the many injuries and deaths, villagers suffered during the traditional rocket festival (Bun Bang Fai) and so decided to replace the dangerous black powder festival with today’s candle festival.

Where communities once competed for the biggest rocket (these festivals still survive today in the Isan region see more) many now compete in building and presenting the most elaborate of candle sculptures. This later tradition normally runs for two days of festivities and include a variety of traditional dancers, musicians and colourful parades, displaying these, at times huge and always marvellously carved works of art on elaborately decorated floats.

The building of the wax sculpture starts around three months prior to the festival. A Candle float can cost as much as THB 300,000, the province at times will help with a grant, while the rest of the money comes from donations from the participating villagers.

Listed below are a number of these festivals. The highlighted province will direct you to the relevant page on Wikipedia which in turn will provide directions and details on other things to do and see in the area…

Being the oldest festival of its kind this event can still call its self the biggest in Thailand. Giant candles, with their main bodies made of wood or plaster are coated with Wax and then crafted by artists from Bulgaria, Costa Rica, India, Malaysia, Mexico, Spain, Ukraine, and the United States of America, to compete for the best in the festival.

On Asanha Bucha day, (19th July 2016) the candles are taken to Thung Si Mueang, a park in the middle of the city, where they are decorated and then exhibited in the evening. On the same evening, there are a number of small processions with lighted candles at several temples.

The Main procession takes place on the morning of Vassa (Buddhist Lent Day: 20th July 2016). The candles are paraded through the city centre on floats, accompanied by dancers and musicians in traditional clothing.

The festival is a wonderful display of exquisitely carved at times massive candles that depict the story of the Lord Buddha, the royal projects in honour of His Majesty King Bhumibol Adulyadej and the many historical attractions of Nakhon Ratchasima.

Surin Candle Festival: Surin is possibly best known in Thailand as the home of elephants and the event boasts a procession of nearly 100 of these elaborately-decorated animals, carrying some of the town’s most highly-revered monks in a unique and memorable merit-making ceremony. The parade also includes exquisitely carved candles from 12 famous temples from within the province along with over 100 Surin-style folk dancers and musicians.

This mass merit-making ceremony, is centered around the highly-respected Phra That Phanom, (a 53-meter-tall, square-shaped pagoda and the most important Buddhist site in the province), it is a time to enjoy  local Thai classical dance and music and to pay homage to the pagoda. Visitors can take part in “Wien Thien” or the ritual of walking with lighted candles in hand around a chedi as a form of meditation to pay homage to the Lord Buddha and his teachings.

The official opening ceremony will take place from 08:00 am. on the  20th July, with a spectacular parade of exquisitely-carved candles accompanied by traditional performances of local ethnic groups. There are also presentations and exhibitions of cultural heritages and tourist attractions from all 10 districts of Suphanburi.

The event is to highlight the unique diversity of the province from its religious culture, the way of life of its many tribal people and to expose the uniqueness of its ancient places. The many carved candles floats take part in a contests for the best in class. Along-side the festival, there will be a host of impressive cultural performances in both music and dance featuring the local diversity.

This festival marks Vessa (Buddhist Lent: 20th July 2016) in a unique way with a long and colourful procession of boats carrying candles to the temple. There are also several other activities that reflect the local way of life the people at the canal-side village of Lat Chado.

Also known as the Lad Chado Candle Floating Festival this annual event takes place on the waters of Lad Chado Canal. Visitors get to experience the local people’s way of life living alongside the canal, fishing, farming and many other activities. There will also be the Baan Suan Rim Klong beauty pageant, local sports games, Lad Chado people’s way of life photography exhibition and a floating market.

The candle processions starts from Central Beach Road to the Walking Street and features a candle carving competition and candle floating competition. With the candles reflecting the local and traditional lifestyle of Pattaya.

Surphan Buri presents the spectacular procession of candles around the province’s main town featuring local folk performances, a candle procession competition and candle floating decoration competition. Watch out for some of the candles which can surprise you in other ways……..

Organised annually on Asalha Puja Day at the Somdech Phra Srinakarindra Park, in the hert of the city. Each temple will beautifully decorate their individually designed candle floats with colourful flowers and that offset the beautifully intricate wax carvings, and then parade them all along the main road via the market to the cruciform pavilion in the Park, escorted by local people dressed in traditional clothing and yet more dancing to traditional folk music. There will also be contests featuring the best floats and cultural performances. See more You Tube

In addition to each of the events detailed above, all the festivals will include a vast array of booths and stalls selling all manner of local handicrafts and local food plus a fair share of games and demonstrations to enjoy.