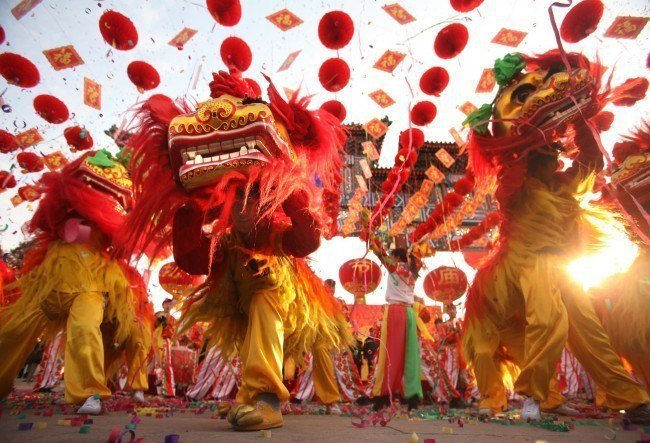 Thailand Year of the Rooster. Chinese New Year in Thailand, where ancient legends tell of man eating monsters and how the colour red and fireworks, kept them at bay

While 14% of its population is officially Chinese, many more Thais can trace their ancestral roots to China, therefore the Chinese New Year is a big thing in the Kingdom, not that the people of Thailand need a reason to party. Legend has it that Buddha asked all the animals to meet him on Chinese New Year. Twelve came, and Buddha named a year after each one. He announced that the people born in each animal’s year would have some of that animal’s personality

This festival always takes place on the first day of the first lunar month so changes every year according to the Western Calendar, but is always between January 21th and February 20th.

The Chinese New Year, (Trut Jihn (ตรุษจีน in Thai) also called Spring Festival, is the most important festival for Chinese people and is the time for the whole families to get together. (In folk culture, it is also called “guonian” – meaning “passing a year”). It is in essence similar to Christmas day for the western world. Originating during the Shang Dynasty (about 17th – 11th century BC) the festival has over a 4,000 year history.

Length of the Festival

Traditionally the festival goes on for almost three weeks and lasts from the 23rd day of the twelfth month to the 15th day of the first month in the lunar calendar, this last day has its own festival called the ‘Lantern Festival’).

The proceedings follow a strict schedule where the people have something to do every day. Preparations start 7 days before the New Year’s Eve, when the people start to clean the homes and only finish on the 15th day of the lunar calendar.

It is believed that the custom of Chinese New Year began when the people would offer thanks for the end of the harvest. They did this by offering sacrifices to ancestors and at the time, they would thorough clean both themselves and their homes. The festival dates changed according to the farming schedule and was not fixed until the Han Dynasty (202BC-220AD)

With such a long history it is not surprising that there are many legends about the Spring Festival. In one such fable, there lived a monster called the “Nian” which was fierce, cruel and ate one kind of animal including human beings every day.

The people were so scared, that in the evening they would hide while the monster came out to hunt, after awhile they found out that the Nian was scared of the colour RED and equally fireworks, especially firecrackers. Armed with this information the people used these, to drive away the wicked monster, that’s why the festival is awash with the colour red and alive with the noise of firecrackers and fireworks.

The start of the New Year, it is regarded as bench mark for the rest of the year and so there are many taboos that are adhered to during the festivities. People will refrain from using words relating to “death”, “broken”, “killing”, “ghost” and “illness” or “sickness”.

It is also considered unlucky if the barrel of rice is empty, because they believe this to be an omen and they will have nothing to eat during the year. Taking medicine is also forbidden on this day; otherwise, people will have sick for the whole year and take medicine constantly.

There are a total of 12 animals in the Chinese zodiac; the Monkey comes 10th in the series. The 12 zodiac animals are: in order: Rat, Ox, Tiger, Rabbit, Dragon, Snake, Horse, Goat, Monkey, Rooster, Dog, and Pig.

The Luckiest Things for “Roosters”

Things That Roosters Should Avoid

Five Types of “Roosters”, What Type Are You?

In Chinese element theory, each zodiac sign is associated with one of five elements: Gold (Metal), Wood, Water, Fire, or Earth, which means that e.g. a Wood Rooster comes once in a 60-year cycle.

It is theorized that a person’s characteristics are decided by their birth year’s zodiac animal sign and element. So there are five types of Roosters, each with different characteristics:

Thailand has a long history of its own with roosters, statues of these birds can be seen all over the Kingdom. Their prevalence stems not from the cock fighting events, that occur across the Kingdom, but from folklore surrounding a legendary cock fight, in King Naresuan early life. The presence is a reminder to the people of the day, when a former prisoner and prince, decided that he would change history and free his people from servitude. For more click here

This site may contain copyrighted material the use of which has not always been authorized by the copyright owner. Such material is made available in an effort to advance understanding of Thailand or topic discussed in the article. This constitutes ‘fair use’ of any such copyrighted material as provided for in section 107 of the US Copyright Law.

In accordance with Title 17 U.S.C. Section 107, the material on this site is distributed without profit. If you wish to use copyrighted material from this site for purposes of your own that go beyond ‘fair use’, you must obtain permission from the copyright owner. If you are the copyright owner and would like this content removed from asia-backpackers.com, please contact us.