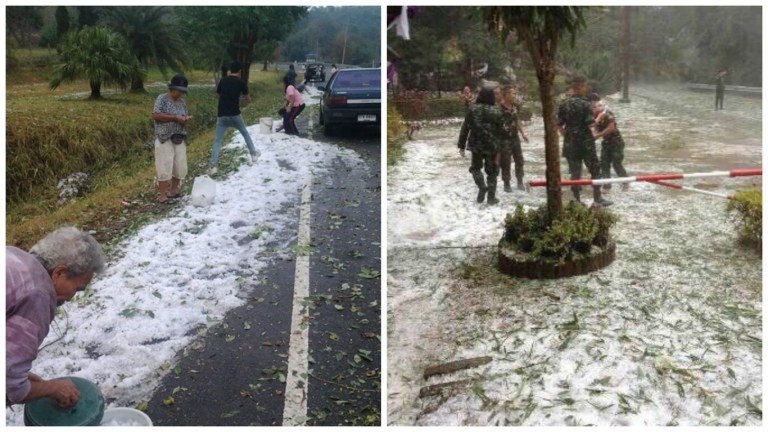 Thailand Weather Leaving Snow Prints, Thailand is a wonderfully strange mix of faiths, beliefs, superstitions and idiosyncrasies, no more so in its peoples collective longing, to see and feel snow.. This may not be that surprising, in a land where the temperature rarely falls below ‘Hot’.

It is true to say that the majority of the Kingdoms people will  have never seen or touched snow (หิมะ: H̄ima), but around late December and throughout January, many will venture to the mountains of the northern provinces, in the hope to witness first hand natures colder side.

While the hills and mountains, may not provide enough of the white stuff to build a snowman, the early mornings do provide a crisp film of frost, to cover the open ground. The picture below, by Richard Barrow shows people gathering at, Phu Kradueng National Park in Loei, on the 12th December 2016, simply to get a feel of mother natures cold breath.

Where to see snow in Thailand

For those who want the guarantee of fulfilling their desire, then possibly the best place to see snow in the Kingdom, is to go to Bangkok and the Snow Town themed park, located on the fifth floor of Gateway Ekamail shopping complex. While TripAdvisor has a number of comments which state  “It is shaved ice rather than snow”, it does have for the admission fee of 300 baht, ‘free’ activities, including an indoor playground, where the kids can play dress-up as princess etc; and a mini arcade.

Over the last few years there have been a number of hoax weather reports, claiming snow falls across the country, (semi) officially  it has snowed once in Thailand. Parts of Chiang Rai on 7th January 1955 were reportedly covered in a snow flurry, (snow aficionado’s will bust a gut at this claim), according to the notice on the picture below, the snow (sort of) came after rainfall at 6 pm and was still there 14 hours later.

A snow ball in hell’s chance of snow in Thailand

While the temperature in the mountains of northern Thailand, regularly drop to minus 3C, in January each year, the chance of snow is zero, according to meteorologist, Sri Chaiyathon, who in an interview said; “it’s not going to happen, because it’s not possible” he went on to add “snow needs more than below-freezing temperatures, it also needs low-altitude clouds and other climate factors, not found in Thailand”.

Whether you come to Thailand to escape the cold and snow, do spare a thought for those of us that live in this wonderful country and have to suffer almost 365 days a year of sunshine……….