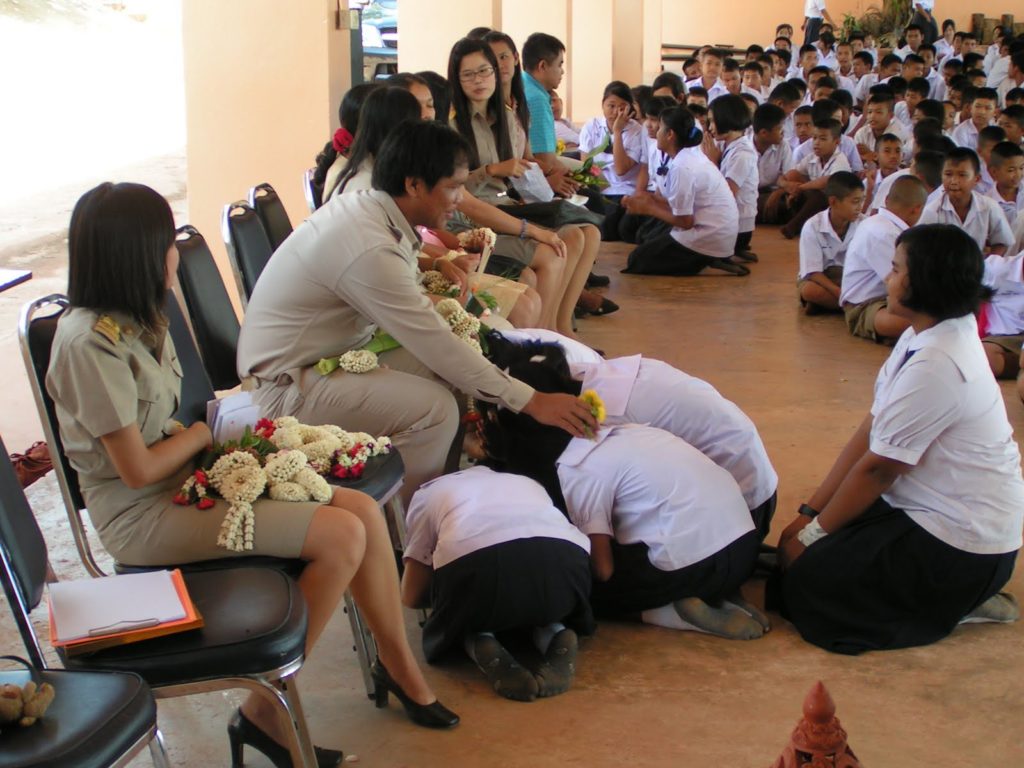 Thailand Teachers Day Wai Kru. Sunday was one of those days when you need to keep the aspirin at hand and you wish you had built that bomb shelter you were planning.

Wai Kru usually refers to the annual ‘teachers day’ where students offer gifts to their teachers as thanks for imparting their knowledge to them. ‘Wai’ in Thai is the prayer like gesture used to welcome or say thanks to people and ‘kru’ means teacher. However Wai Kru also has other meanings, such as a Muay Thai boxer ‘addressing’ the ring in which he is about to fight and also our circumstance, when a loopy-loo woman gives thanks to all the spirits that have guided her over the months and years.

It is an all-day event. It starts at 6 a.m. with the usual Isaan ‘music’ which is the Philip Glass of Thai music; the constant repetition of motifs played at a million watts with 40% distortion. This is then replaced with a man shouting into the microphone for an hour or so before the monks arrive. Offerings are made to monks, incense sticks are lit, and in return I guess they bless the house. They are then fed and sent on their way upon which the man returns to his ranting and food is eaten by all the guests of which almost the entire local community is invited plus the families of the crackpot woman and her husband; the woman cooks all of the food herself. There are lots of flowers, mostly marigolds, and money on sticks; people are expected to wear mostly white. The tables stretch out onto the street which a lorry containing the public address systems has blocked. 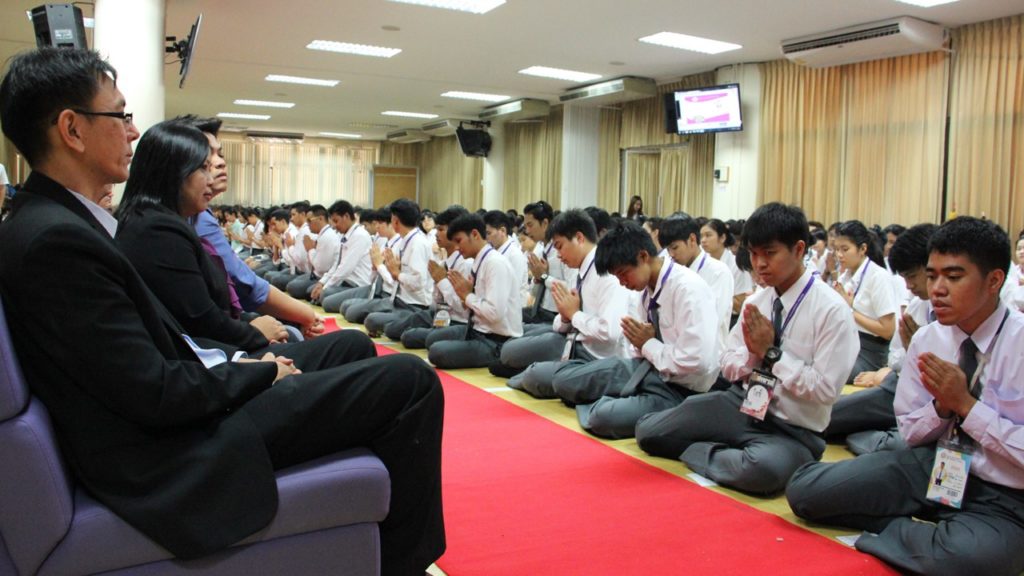 The afternoon is a period of relative calm but it is only the calm before the storm. In the evening the music starts up again. This time it is a live band although if they called themselves that you could have them under the trade descriptions act. Another man, who looks suspiciously like a katoey (lady man), shouts unintelligible lyrics into the microphone whist another man hammers away on a xylophone and another thumps a drum. Each seem to be playing to a different rhythm; the total effect is that of toddlers being let loose on a Status Quo set. The ‘songs’ appear to have no beginning or end, they sort of fade away usually with the drummer left banging his solitary drum before the ‘singer’ starts shouting again. As the evening goes on the volume is slowly ramped up.

The mad woman gives more offerings to her spirits. More incense, more candles, more money on sticks. It is clear she is on something and she dances as if in a hypnotic frenzy – she is clearly certifiable. All the great and good of the area, including the Poo Yai Baan are there, although Ploy tells me some do stay away and of those there about 50% do not totally agree with this throwback to Thailand’s animalistic past but don’t want to pass up the free food. I do not go. Ploy takes the photos, I stick cotton wool in my ears and go to bed. It is impossible to listen to the TV or read a book or work, even with the doors and windows shut, so I just have to let it pass. That or taking a baseball bat to that bloody ‘singer’. It doesn’t happen often and she is the only local who I am aware of that does this.

It must cost a fortune. It is like she works continuously until she has enough money for this event, blows it all and so the cycle starts again. Her husband, a mild mannered man who I am told has many mistresses, seems to accept this.

I asked Ploy why she doesn’t do this and she just shrugged. Sometimes she flirts with the fortune tellers and she definitely has a thing for feng shui, but otherwise I am just grateful to have married a relatively sane woman.