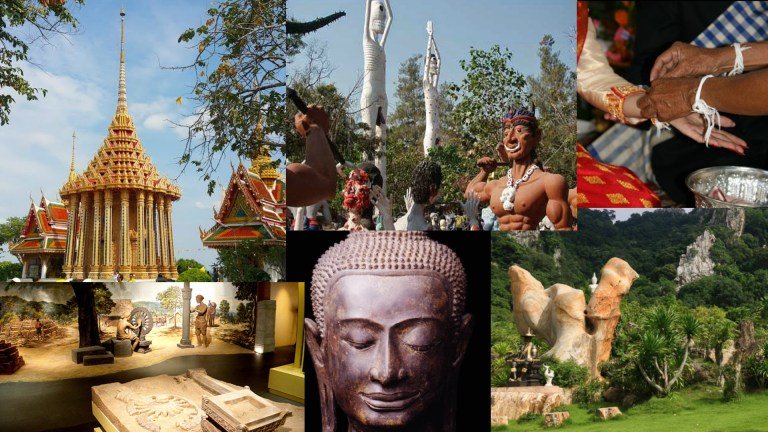 Thailand Suvarnabhumi. An annual event which brings visitors, local ethnic groups and the past, together in a rich tapestry of history, mystery and glory, in the legendary land of Suvarnabhumi

Where: U-Thong District, Suphan Buri (Thai: สุพรรณบุรี) is one of the central provinces (changwat) of Thailand

This annual event is now in its seventh year, it is sometimes called the ‘U cradle of civilization and Suvarnabhumi’

Background on the Province

Suphan Buri (The name of the province and its capital literally means City of Gold), is claimed to be the location of the legendary land of Suvarnabhumi,  (Thai: สุวรรณภูมิ, rtgs: Suwannaphum – the Golden Peninsula).

While this ancient fabled land is mentioned in Thai historical writings, the first confirmed historical settlement was in the Dvaravati period, known as Meuang Thawarawadi Si Suphannaphumi, “the Dvaravati city of Suvarnabhumi”. (The new Bangkok airport, Suvarnabhumi Airport, was named after the mythical kingdom of Suwannaphum).

Later the city would be renamed U Thong, in light of the fact that it was the home city of Prince U Thong (1314 – 1369), the first King of the Ayutthaya kingdom. The city also gave its name to a definitive style of Buddha icon, which can be seen through-out the Kingdom, and on many amulets worn by the Thai people today. (See our post Black Magic and Thai Amultes)

U Thong City Past

The province and earlier city of U Thong was the location of several battles with the neighbouring Burmese. The most important is depicted on the provincial seal, which shows the elephant battle between King Naresuan the Great and the crown prince of Burma in 1592. This battle is why you also see so many Statues of Roosters in present day Thailand.

U Thong is home to some of the country’s oldest Buddhist religious shrines, relics and hillside carvings. During these festivities, the U Thong National Museum, showcases exhibits of archaeological evidence and artifacts, from different periods that have been uncovered in the province and U Thong City. They range from the cave dwellers of the prehistoric era, to the city and rural inhabitants of the Dvaravati era.

The event also includes a number of performances featuring the art and culture of the local Lao Song ethnic people, plus a number of other cultural demonstrations.

Outside of the U Thong National Museum is a reconstruction of a Lao Song home, which gives visitors an insight the people’s traditions, clothing, and tools. The Lao Song are descendants, of Lao peoples from the areas of Tonkin and areas east of Luang Prabang, who were forcibly removed to central Thailand, as slaves and corvée labourers during Siamese annexation, in the 18th and 19th centuries.

The Lao Song people have a strong belief in their past and the preservation of their traditional dress, language, and culture. They were once used as guards, for the royal courts and to help control the powerful Chinese minority. There are approximately 34,000 Lao Song spread out over central Thailand.

If you are lucky you may also witness a Lao Song Wedding Tradition (ประเพณีแต่งงานของไทยโซ่ง): The Lao Song always hold a wedding ceremony during the waxing moon periods of the 4th, 6th and 12th lunar months

More to see at the event

Each year there is also a Photo contest, a fashion show, a travel expo featuring the ‘5 mountains’ and the local “Chaopho Phraya Chak Shrine”, along with a light and sound show depicting “U-Thong, as the Source of the Suvarnabhumi Civilization”. Most evening there are also well know live Thai bands playing an assortment of music.

This of course would not be Thailand if there were not a host of stalls and street vendors selling a vast range of delicious and succulent food and drinks, alongside an equally vast array of stalls selling local handicrafts.

If you like your history spiced with a little bit of ‘Weird and Eccentric’, why not take a peek into the Hell Park at Wat Phai Rong Wua, just 45 min southeast of U Thong. The Wat also houses many of the world’s largest metal Buddhist objects. It is most famous for housing the largest bronze Buddha image in the world. The statue, called Phra Phutthakhodom, is 10 meters wide at the lap and towers a staggering 26 meters.

But if you like your history and culture and can forego the normal blaze of colour and noise you find in most of the Kingdoms other festivals, then this event is for you.  Thai history shows that Savarnabhumi the Golden Peninsula, became a great crucible of different peoples who met, loved, worshipped, fought, battled, labored, struggled and survived to emerge as the Kingdom of Siam.

For more on other festivals during December click here