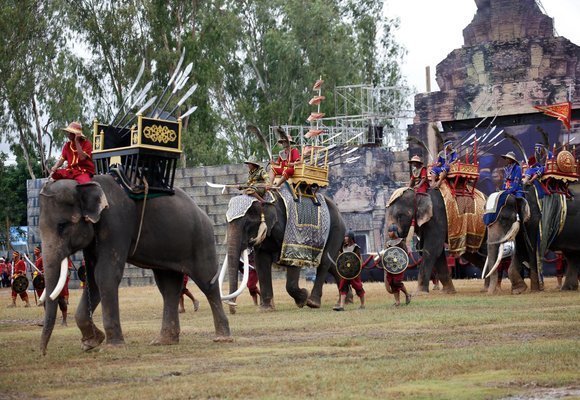 When: 17-20 November 2016 (Traditionally held over the third weekend in November)

The Surin Elephant Roundup is a cultural festival held every year in Surin, Northeast Thailand. The festival has its origins in the ancient royal hunts which were conducted in the province around the time when the Roman Empire was collapsing.

This relatively modern event started in the 1950’s and is staged over three days, it includes a variety of shows displaying the physical prowess and skill of these intelligent and majestic animals. The venue for part the event, Si Narong Stadium, has been dubbed the “world’s largest domestic elephant village”

Schedule of the Event

A marching procession featuring the mass of elephants starts swaying through Surin city from the railway station toward the elephant roundabout on Prasat Road, some carrying mahouts in authentic replicas of battle outfits from the Thai–Khmer–Burma-Laos battles. Intermingled with the elephant procession will be local Thai people in traditional dress, dancing and playing music. Once all the elephants have arrived, the elephant banquet can begin.

18:00 – Light and Sound Show “The legend of a thousand years of the Sikhoraphum Castle”

Staged at the Sikhoraphum Castle Amphore Sikhoraphum. The ancient structure is a Khmer temple located, between the cities of Surin and Sisaket. It was built in the 12th century by King Suryavarman II for Hindu worship. The cultural show depicts in song and dance how the early Surin people came to the province with their elephants and tells of the many battles they fought with invaders from Burma, Lao and Cambodia. (see more you tube).

The elephants and their mahouts gather at the Elephant Stadium, and the day begins with a speech from the chairperson of the ceremony, after which baby elephants are paraded through the stadium, followed by the processional march of bull elephants.

Next comes the Kuy hunters who are the indigenous residents of Surin, who have been capturing and training elephants for centuries, they showcase how elephants were captured by their forefathers working both alone, and using already trained elephants.

Tame elephants which were trained to corral their wild kin, have been bred by the Kuy people for centuries and are called Khonkies or Koomkies. After the displays on elephant capture, there then begins various displays of acrobatics, football and polo matches, along with displays of tasks performed by domesticated elephants, such as logging.

Another event which displays the raw strength of Surin’s elephants is the elephant tug of war contest. The contest starts with 50 personnel against the biggest bull elephant. As the bull beats the people, 15 more are added until there are 100 matched against a single bull, and even then the bull usually wins.

The finale of the show is re-enactment of a historical battle between Siamese and Burmese forces. The forces are dressed in traditional colours with red for Siam and blue for Burma. They take up positions according to traditional battle tactics, with a front row of foot soldiers, the central ground is held by the elephants protecting the King Elephant in the middle, while the flanks contain cannon and finally a rear guard, of more foot soldiers. The battle ends with ‘of course’ a Siamese victory.

Along with the elephant show the stadium hosts a mini-half marathon called Mueang Chang,  and along side that the Red Cross Society also stage a number of cultural performance, showcasing the ethnicity of the province

Mingled within the event will be displays of traditional Isaan dancing, beautiful flower girl parades, beauty queen pageants, and of course thousands of vendors selling traditional Surin and Isaan food and local made goods.

The event is a joy to behold and as you get closer to these majestic animals, you can appreciate how they made up such an intricate part, of the countries colourful and at time turbulent past 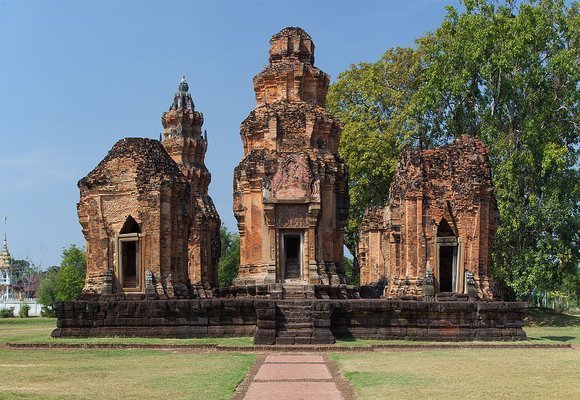 Pictures and schedule from http://surin.go.th