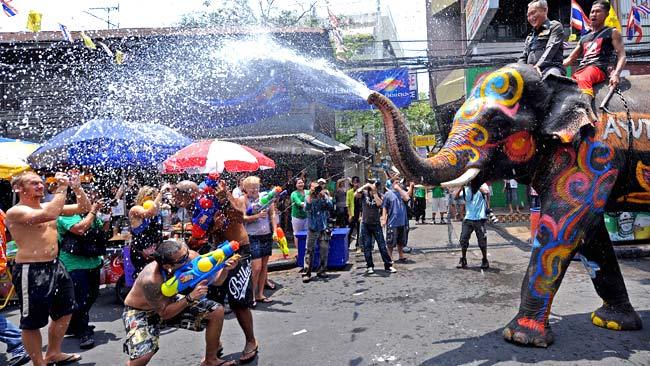 Thailand Songkran Festival 2017. The wonderfully, colourful and at times simply crazy festival of Songkran is celebrated across Thailand in April each year. With differing provinces and cities having their own twist to what is in the main a manic few days of complete bedlam. Listed below are a number of the largest Songkran festival through-out the Kingdom. This is by no means a complete list.

Bangkok: The Bangkok Songkran Festival is at its biggest and most fun at the large outside area in front of CentralWorld Shopping Complex. Here, as well as water play, there will be the chance to experience some of the more traditional aspects of Songkran in an alcohol-free, family-friendly atmosphere.  Best of all, there will be a foam party which gives people a new way to enjoy the watery fun while cooling off at the hottest time of the year. The party takes place from 13-15 April, 2017 and is open to everyone.

Chon Buri: Sand pagoda ceremony on Lai Day, Bang Saen District. Cultural activities, including sand sculpture contests along Bangsaen beach, see our post on where to enjoy 5 separate festivals spread over 5 days 16-17th April and all within a short distance of one another.

Chai Nat: Celebrate Songkran in Chai Nat from 13-14 April. The big parade is at 8am on 14 April. The province normally holds a special Thai – Laos Songkran festival, to honor the long traditions of the two intertwining countries.The parades are really quite spectacular and the whole scene is more about the spiritual side of the festivities rather than simply throwing copious amounts of water.

Pattaya: The water throwing goes on for 10 + days here in the play ground of Pattaya. Join a range of fun activities at North Central and South Pattaya Beaches and Lan Bodhi Park Na Kluea, 10-20 April.

Samut Prakan: The Pak Lat (Phra Pradaeng) Songkran Festival (งานเทศกาลสงกรานต์ปากลัด/พระประแดง) Boasts one of the most colourful Songkran parades in Central Thailand, that of the the Nang Songkran procession.

The local people are in the main of Mon descent and this is an ideal opportunity for them to proudly dress in their own traditional clothes. The route of the parade is from the district office (where there are daily activities including folk games and entertainment such as the ancient game of  Saba, plus Tha yae Mon and other traditional Mon music), to Wat Protket Chettharam where the people will make merit by releasing fish and birds. 18-20th  April.

Nonthaburi province: This small province (ranked 74th out of 76 provinces in the Kingdom) is directly northwest of Bangkok on the Chao Phraya River. Within its small boarders the majority of its people are of Mon descent and this festival is the biggest annual event for these ancient people. This square shaped small island can proudly boast one of the most colourful Songkran festivals in the Kingdom and hosts a number of activities from the blaze of colour of the Mon people dressed in their traditional clothing and marching in the parade, to the numerious traditional Mon plays and daily activities see more on this festival click here.

Nong Khai: Get a sense of history at the first Thai-Lao Friendship Bridge, take part in the procession of the province’s renowned Buddha statue, Luang Phor Sai, normally housed in Wat Pho Chai, which is paraded around the town of Nong Khai alongside the Wian Thian candle ceremony. The event includes traditional dances and merit-making ceremony at at the temple. In addition, there will be a parade of rice, a sand pagoda building contest and a Nang Songkran beauty contest.

Khon Kaen: Has their Festival of Dok Khun Siang Khaen and Khao Niao Road ((เทศกาลดอกคูณเสียงแคนและถนนข้าวเหนียว) Enjoy Songkran in the Khon Kaen style with traditional ceremonies, merit-making and 10 days of fun, 5-15th April. While you can join in the water throwing from 13–15 April around Kaen Nakhon Lake and on Si Chan Road.

Loei Province: Loei borders the neighbouring country of Lao and so it is not surprising that the festival is known as the Thai–Lao Songkran Festival (งานประเพณีสงกรานต์ไทย-ลาว) Large numbers of Lao people participate in the activities of the festival. 12–15th April, while Lao New Year, called Songkran (Lao: ສົງກຣານ, [sǒŋkràːn]) or Pii Mai (Lao: ປີໃໝ່), is celebrated every year from April 14 to April 16.

Celebrations can also be found in the province at Wat Sri Phochai Saeng Pha in Na Haeo district, every night on April 14-16, the procession of Ton Dokmai will be performed around the ordination hall of the temple from 7pm to 9pm.  Ton Dokmai,  are bamboo towers decorated with flowers and bai sri (beautifully folded banana leaf-made containers), which literally come alive when each evening they are lit by their own candles.

Mukdahan province: A unique way to enjoy the Songkran festivities. New Year celebrations and traditions from four countries in the Greater Sub-Mekong region: Thailand, Lao, Vietnam and China, are being combined in a cross-border party. This year, there will be celebrations centred around the Thai-Lao Friendship Bridge over the Mekong River while other events will take place in Mueang district, Mukdahan, at Chalerm Phra Kiat Kanchana Phisek Park and Samran Chai Kong Road which will be turned into an Indochina Walking Street.

The event highlights include spectacular light and sound presentations telling the stories of the ancient civilizations of the region. There will also be cultural performances from the four countries; a ritual to pay homage to holy spirits and folk performances from the eight distinct ethnic groups of Mukdahan. There will also be a dancing fountain with music and water tunnels and foam parties to help cool off the revellers.

Other activities include a Thai-Indochina food festival, a Mekong fish-eating festival, displays of herbs from the four nations, a Miss Indochina Beauty Contest, an ASEAN languages contest, and displays of drum playing and concerts from leading singers. 13 – 15 April 2017

Lampang: Salung Luang Procession and Songkran Festival (งานแห่สลุงหลวงและสงกรานต์) is the unique Songkran festival of Lampang, organized from 12–14 April every year (“salung” means “water bowl” and “luang” means “large”). On 12 April, the colourful and viabrant  Salung Luang procession gets underway with its  beautifully decorated floats and people dressed in traditional clothes.

The participants in the parade dress up in the ancient Lanna style and carry a giant silver bowl around the city into which the people pour lustral water which in turn has turmeric and acacia added. This will later be used to wash the Phra Kaeo Don Tao, the revered Buddha image of the town enshrined at Wat Phrathat Lampang Luang. Then, during 13–14 April every year, there will be a merit-making ceremony at the temple, sand pagoda making, ceremony of pouring water onto the elderly, splashing of water, fairs and various forms of entertainment.

The best-known Songkran celebrations in the whole of Thailand take place in the northern city of Chiang Mai. Here you’ll find a wonderful balance of water-based fun and sacred ceremonies that show the religious importance of this festival to the Lanna people. In Chiang Mai Songkran is often called Prapeni Pi Mai Mueang and lasts five days. Highlights include the procession of Chiang Mai’s prominent Phra Buddha Sihing image as well as bathing the image, and taking part in a parade bringing sand and Sali (the Bodhi tree) clutches to temples, cultural events and performances. 12 – 17 April 2017

Phuket: Join local and international tourists in marking the Thai New Year along the famous Patong Beach with a range of fun activities, 12-13th April.

Hat Yai: Witness one of Thailand’s most unique ways to celebrate Songkran as the clock strikes midnight at Nipat Uthit 3 Road, Sanehanusorn Road and Wat Mahatta, 11-15th April.  Here there will be free music and concerts as well as other entertainment throughout the event, every day between 10:00 – 23:00 Hrs.

Koh Samui: Join local and international tourists in marking the Thai New Year at the famous Chaweng Beach with a range of fun activities, 13th April.

For more on what Songkran is traditionally about click here