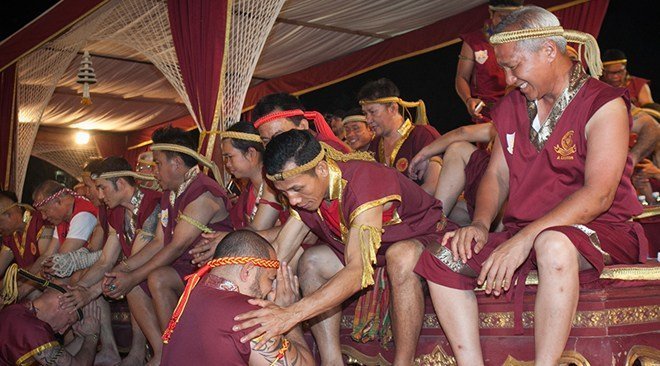 While practitioners and teachers alike feel confident that it will not be disappearing anytime soon, maintaining authenticity and accurately that showcase its fascinating historical evolution is extremely important.

Wai Kru is much more than a ceremonial kick boxing ritual, performance art or just paying respect to one’s teacher. It is an important part of Thailand’s cultural and martial history, with origins that are traced back to ancient battlefield where Thai soldiers fought to keep their country from being colonised centuries before it developed into a sport.

In its earliest incarnations, Wai Kru reportedly dates to the first independent Thai Kingdom of Sukhothai (1240–1438).

In Thailand, martial arts (in addition to dance, theatre and performance arts) are regarded as a kind of spiritual activity. Fighters training for competition are expected to show deep gratitude and paying homage to their mentors or gurus, who through successive generations give them an opportunity to learn the art of Muay Thai.

Hence, the Wai Kru is a way of worshipping past instructors and their animist spirit entities that remain on earth.

This devotional reverence that pupils show their teachers manifests itself even today in modern 21stcentury Thailand via the Wai Kru ceremony.

A Muay Thai fighter performs the Wai Kru by circling the ring three times before kneeling and prostrating himself as a sign of respect to religious deities (traditionally Buddhist) earth and mankind, asking for an honourable fight and protection for both himself and his opponent.

Fighters and gyms from each of Thailand’s 77 provinces include individual movements into personal Wai Kru Ram Muay performances, with their choreography providing important clues as to which gym or region they represent. For example, boxers from Northern Thailand’s Chiang Mai province would have a specific routine depending on which gym he is currently fighting out for. To start the Wai Kru he might touch his head to the canvas to pay respect to the Earth first and foremost, then his instructor, then movements to ward away ghosts before finally finishing with a salute to the musicians playing that night.

After completing Wai Kru a fighter then performs the Ram Muay, which can be either simple or complex combination or movements based upon images of the monkey god Hanuman, who appears in the Thai epic the Ramakien, to demonstrate a fighter’s control and style. It is a separate ritual from Wai Kru, however as Muay Thai evolved from combat into a sport the two acts have become inseparable. The boxer repeats Ram Muay on each side of the ring to demonstrate his prowess for all the audience to see. This personal ritual is much like an improvisational dance performance that can vary from night to night depending on individual mood or conditions.

Music is an integral part of Muay Thai as this martial art evolved and has become an extension of Thailand’s traditional performance arts.

During Wai Kru Ram Muay presentations (and all fights) a musical orchestrate performs in the background playing Ta Pong or Glong-Kag (two-sided drum), Toe Pee Java (Javanese flute) and the Ching (cymbals) among other instruments.

The statue of Nai Khanom Tom – a local hero, famous for his victory over ten Burmese fighters in a boxing bout that took place in 1774. He is regarded as the Father of Muay Thai, and is one of the essential elements of the annual Wai Kru Muay Thai Ceremony in Ayutthaya

Most visitors to Thailand and Muay Thai aficionados know the Wai as a traditional Thai greeting with the palms pressed together as a sign of respect. Kru is the Thai form of the Sanskrit word guru meaning teacher. Ram is the Thai word for dancing in classical style, and Muay means boxing. In English one possible yet militaristic sounding translation could be ‘War Dance Salute to Teacher’. However, ‘Ritual Salute to Teachers Present and Past’ might be a better, abet slightly less colourful English translation.

The 13th World Wai Kru Muay Thai Ceremony in Ayutthaya will be organised on 17 March, 2017. Last year it attracted over 1,200 Muay Thai followers from 57 countries around the world. This is a very positive sign the art form is being preserved for future generations as many consider the ritual as the ‘heart and soul’ of Muay Thai.

Every year, some of Thailand’s best-known Muay Thai fighters such as Samart Payakaroon (in this picture) will lead international Muay Thai boxers in the ritual that pays respect to their teachers at the World Wai Kru Muay Thai Ceremony, which has been held annually in Ayutthaya since 2004 (TAT Newsroom’s photo file)