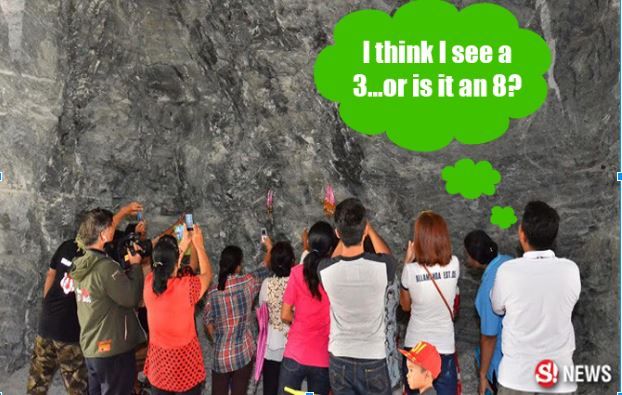 Thailand Lottery. Thais who love taking chances will go out of their way to find magical lottery numbers that will win them prize money. They might try anything from numbers they saw in their dreams to looking for numbers in fungus. The latest trend? Staring at a rock.

Locals and tourists were reported to be seen recently pouring into a temple in the U-Thong district of Suphanburi province. Inside is a cave that is being prepared to house a Buddhist image, but according to the superstitious, a deity’s face can be seen on the carved rock itself.

While some see it as the gesture of the Meditation Buddha, others believe that they see the face of Phra Mae Thorani, who is an important goddess in Buddhist mythology in Southeast Asia. She is seen as the mother Earth, associated with nature and life.

After news of a deity’s face appearing in a rock spread, Suphanburi locals and people from other nearby provinces began pouring in. With their phones in hand, they came to pray to the Buddha image that is still being carved from the rock, before proceeding to turn on their phone flashlights to shine onto the rock, hoping to see a number.

Chumpol Sutthijit, the deputy mayor of Tambon U-Thong, said that, after the discovery of the deity’s face in the stone, she had brought her family members to pray and ask for blessings. According to Chumpol, everyone experienced luck and fortune in their business, as well as seeing lucky numbers on the stone, reported Sanook.