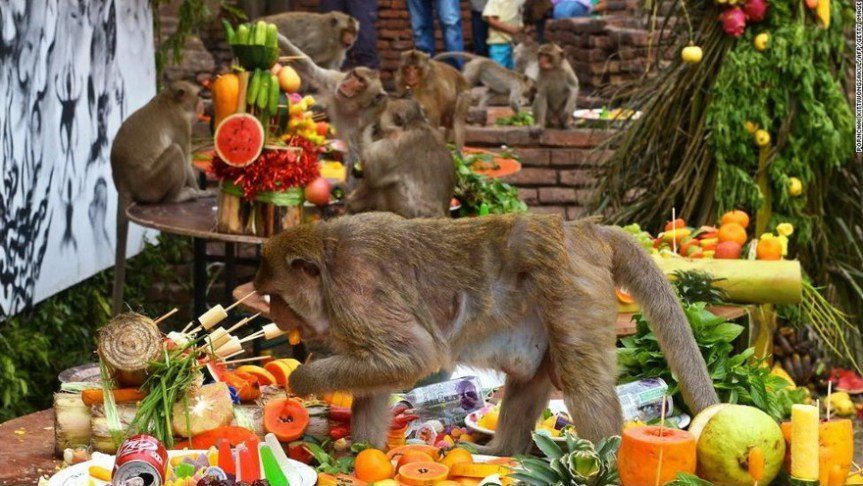 Thailand Lopburi. Lopburi is one of 77 provinces in Thailand and one hundred and fifty kilometres northeast of Bangkok city. It takes about a two and a half hour drive to get there. Lopburi is famous for their sunflower farms but another attraction is their many primates that occupy a temple right in the heart of Lopburi town.  The highlight of Lopburi town that draws in thousands of visitors at one time is the famed Monkey Feeding Festival which is held in the month of November on the 28thand 29th each year. Monkeys are given a huge buffet spread generously provided by residents of the town in this annual event. Aside from the monkey feeding buffet are also other event activities like costume shows, parades, games and off course a variety of street food and snacks.

Monkeys wander around freely in this township of Lopburi. While theMonkey Temple is itself located in the heart of the city on a small hillock, the primates roam around the city and can often be seen in shop lots, on the roads and just about anywhere. The Monkey Temple is also known as Pra Prang Sam Yot temple and was built by the Khmer in the 10th century and very similar in design to the temple ofAngkor Wat in Cambodia.

These monkeys are very accustomed to human beings and have been known to snatch food, drinks and even cameras or jewellery from visitors. They can also be a little aggressive at times so it is best to keep a distance and do not attempt to hold or feed them close up!  The primates are protected here as they are part of the tourist attraction reasons therefore they are given much priority in this town.

It is not hard to find this temple as it sits on the knoll of a small hill and is a rustic looking stone temple surrounded by a metal gate/fencing. An entrance is charged to go into this temple. Inside the temple is a shrine and plenty of monkeys lazing around in the alcoves and in corners or around the alters. You can make a merit offering if you like or just have a look around. All around on the grounds and outside of the temple will be plenty of these monkeys in all sizes, big and small. Be a little careful of the baby monkeys for though they may look cute but are aggressive and mother monkey is always nearby keeping an eye! Most visitors will buy food such as lotus seeds, sunflower seeds, bananas, drinks and other goodies for them. These primates are actually expecting to be fed by the visitors who come to this place so do not be surprised if they follow you around but keep a good hold of your things as they might think it is food and snatch it from you.

There are huge statues of monkeys outside of the temple and a few golden monkeys. These statues are a tribute to the monkey God, Hanuman and his minions. So it is actually very easy to spot this temple as the statues are the first thing you will see and they are large enough not to be missed.

Once a year, normally in the month of November around the third week of the month, the city of Lopburi will host a massive buffet for the monkeys in the city. The buffet, courtesy of the people in the city was first performed by a local businessman who wanted to explore tourism in the city and to bring in more tourists to Lopburi. He personally donated a huge spread of fruits and other goodies to start attracting the monkeys for a feast and soon it became an annual event with more than 4000 kg of food laid out to feed the 3000 monkeys in the area. This event draws tourist in by the thousands and other activities are also held along with this monkey feeding festival to make it a colourful and enjoyable event.

Long tables are spread out with bananas, other fruits, nuts, lotus seeds and other vegetables as well as packet drinks and tinned drinks, all for the benefit of these primates. Have you ever seen a monkey open a can of soft drink or even drink from a plastic bag? Well, you will be surprised how human like they can be. They know how to open a drink can and help themselves to the content or bite a small hole in a corner of a drink pack and sip the contents out without spilling a drop! While it is fun to watch them and sometimes you can see some of the townsfolk feeding them up close, do not however try this yourself as the monkeys do have a habit of climbing on you if they know you have food to feed them. These people are accustomed to the monkeys so they do know how to handle them but a word of caution to visitors to keep a distance and just take your pictures a good way away.

You can donate to this festivity by buying food from the vendors for feeding the monkeys or contribute to the cause in donation boxes normally found in the monkey feeding area or at the temple.

The Significance Of The Monkey

To the Thai people, a monkey symbolizes the GodHanumanfrom stories of theRamayana or known as the Ramakin in Thailand. It was believed that Hanuman and his monkey troops saved a Goddess from the clutches of a demon king through his wiliness and courage. Therefore, monkeys are a revered animal in Thailand and often left alone. The monkeys are also a tourist attraction and often found to be smart and somewhat cute to many people. Though they can also be a nuisance but they are never hurt or killed by the people in the town. Their antics are patiently tolerated and the most would be just that they are reprimanded or shooed of if they get to be too much of a nuisance!

Hanuman, theMonkey King is often found in many stories of the Thai culture also as a main performer in Thai puppetryand theKhon classical dances. He is easily identified as a character with a white face and a band of gold around his forehead. Anyone who has read stories of the Chinese Monkey King will also know that the band was placed there by Buddha to control the naughty monkey who was often up to mischief.  The monkeys of Lopburi are symbolic of their namesake King, Hanuman and therefore treated with much respect and loved by the townsfolk.

Lopburi is a town with quite a few attractions all year round but a good time to visit would be in November on the 28th and 29th . Drop by to see the Monkey Feast after a day out at the sunflower fields and watch our closets cousins have a feast in their name!

Photos  and video courtesy of National Geographic and Shutterstock