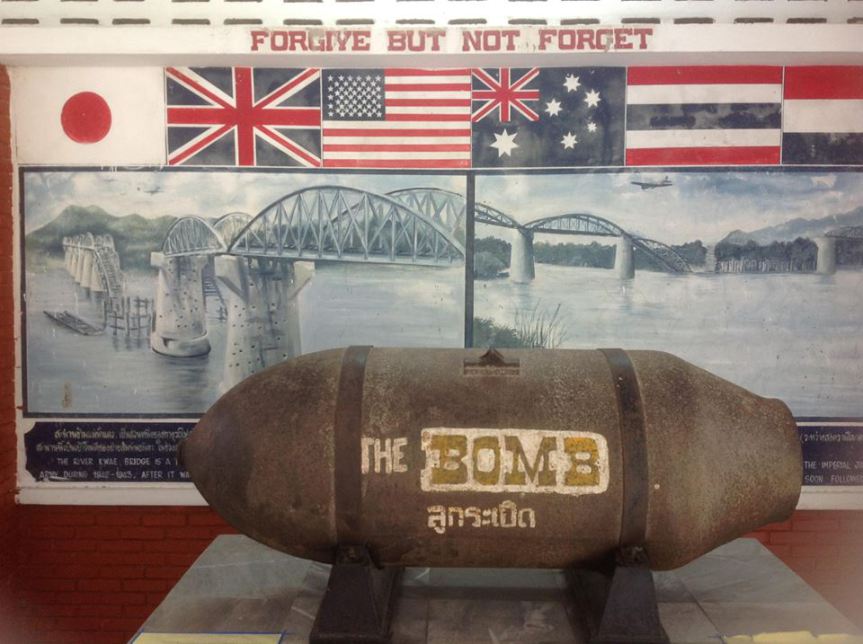 Thailand Kanchanaburi Kwai. Kanchanaburi is a sleepy hollow town located two and a half hours from Bangkok City. The notoriety of this township was brought to light during the Second World War when Japan occupied Thailand and again in the famous movie starring Alec Guinness and John Holden in a Bridge On the River Kwai.

Modern day Kanchanaburi is not much different from the days of pre and post war, with the exception of more cars and tourists. It is still a quiet town with a sombre air about it that seems saturated with events of the past. Despite the dark history of this quaint little township, there are charming places that you could wander too such as the refurbished China Town area with numerous little old fashioned coffee shops, very personalized pubs and small restaurants runned by the expat community who have settled here during the post war years and off course the many temples, markets and historical sites.

One such historical site, which is located near the Bridge over the River Kwai railway line, is the JEATH War Museum. If you have ever wondered why it is known as the JEATH rather than the DEATH War Museum it is because it stands for the first letter of the countries involved in the War at that time in Kanchanaburi during WW2. The countries are Japan, England, Australia and America, Thailand and Holland. This war museum in commemoration of the prisoners of war, who died during the construction of the Sino-Burma Death Railway line to supply Japanese forces during their invasion of South East Asia, was one of the most brutal building efforts in history at that time. Hundreds upon thousands of prisoners of war died in the most squalid and torturous conditions which were suffered under the brutality of the Japanese regime.

The museum was created by the head abbot of the Wat Chaichumpol, the venerable Phra Theppanyasuthee, in the year 1977. It serves as a reminder of the war and deaths suffered in this town, an insight of what humans are capable of to one another and to pay tribute to the fallen prisoners of war from the nations involved in the construction of the Death Railway.

At the entrance of the museum, the flags of the six nations are flown to honour the countries involved. The flags are placed according to the name of the Museum underneath it. There is a small entrance fee to be paid and proceeds go towards the maintenance and other war memorial maintenance in Kanchanaburi.

Walking into the courtyard there are two main buildings, one is a mock-up of the housing that prisoners were kept in and the other houses the war memorabilia salvaged from around Kanchanaburi after the war and placed on display.  Within the courtyard as you walk near the river edge, there are several 500 pound bomb warheads salvaged from the river. These bombs were dropped byAllied troops in B52 planes when they tried to stop or disrupt the construction of the bridge that was a railway bridge to link the supply trains to Northern Burma. Many lives, prisoners of war and locals alike were lost during these bombing sessions which grew in intensity as construction of the bridge progressed. There is also a statue of Mr Takashi Nagase, a Japanese interpreter who was sent to recover the remains of former Prisoners of War when the war ended and who later atoned for the atrocities committed by the Japanese when he converted to Buddhism and became a monk and the founder of the River Kwai Peace Foundation. The foundation was responsible for giving out thousands of scholarships to bright poor students in the town of Kanchanaburi through his devoted charity efforts. The statue is a commemoration of his efforts to try to right a wrong brought on by his country during the war.

The building that houses the prisoner of war camp is very similar to the actual fabricated huts used to house the prisoners at that time. Constructed of bamboo poles and with raised platforms to serve as makeshifts bed on dirt floors with coconut frond roofing it became a cesspool during the rainy season and an oven in the hot months. You could see there were no proper toilets and little dug out troves served as waste irrigation through the unit which caused pollution from the waste material and a breeding place for disease and infections. Prisoners who were sick, dying or wounded were housed together and many of the prisoners died of dysentery, infections and malnutrition.  Even visitors walking through this mock-up will not spend much time in here because of the heat and humidity, what more the prisoners who were subjected to more harsh conditions!

There are also illustrations in there of the types of inadequate treatment that was received by sick and dying prisoners, the type of food they were given which consisted of only watered down rice with some salt, the types of sleeping conditions, the prevailing diseases, the heroes who helped them and the torture they went through. Most of the prisoners were also naked, malnutrition and sickly but had to work an average of 72 hours without rest or proper food and drink. As a result, more than one hundred thousand prisoners died in these camps and their bodies thrown into shallow mass graves outside the camp or in the jungles and mostly in unmarked graves. Only their dog tags were kept by comrades. Pictures are not allowed in this area of the displays so visitors are advised to keep aside their cameras while in this area. Located outside the prisoner quarters is the mock-up of a Japanese watch tower also very similar to the ones used at the prisoner of war camp during that time.

In this building the war memorabilia is divided into various sections for the Allied and the Japanese. Salvaged from former prisoner of war camps, the bridge building sites, the river bed and various other locations in Kanchanaburi, they are brought to this museum and a few other war museums in the city for display. There are old Japanese and Allied uniforms some in still quite good condition.

Of interest are the weapons and tools used during the construction of the bridge and a place called Hell Fire Pass. Most of the weapons and tools are already rusted but you can see from the tools that the prisoners had the most basic tools to work with in this massive construction effort which meant that brute strength was required to even wield these tools and that would have been a most difficult task considering the condition of the sickly, injured and malnutrition prisoners.  In the weapons section there are old rifles, samurai swords, bayonets, spent cartridges and ammunition shells as well as various other items normally carried by the soldiers at that time.

The most poignant part of the display is the helmet section and bomb casing display. Here you can see various types of helmets used during the war but the one that catches your eye is an American helmet that is worn out and with a big gaping hole in the crown of the helmet. This is a sad reminder of the casualties of war and one can imagine the state of the doomed owner of that helmet. There is also a 500 pound bomb complete with the original casing but diffused and salvaged from the many air raided sections of the bridge. Inscribed above the bomb are the words “Forgive But Not Forget” to remind generations to come of those who perished in the war and many of whom the remains are forever unknown and unfound in Kanchanaburi.

Other items on display include old suitcases, typewriters as used in the old war office, ammunition shell cases, medals and insignias as well and other personal items carried by Japanese soldiers. One can’t help but feel the immense sadness when looking at these items and ponder at the fate of those who lost their lives, most of them at a very young age and from so many nationalities. Once a year, the Australians celebrate the memory of their fallen loved ones on Anzac Day, where they would come from as far as Australia and New Zealand to pay their respects to these fallen heroes. Many still have living relatives who have lost loved ones in the war right here in Kanchanaburi.