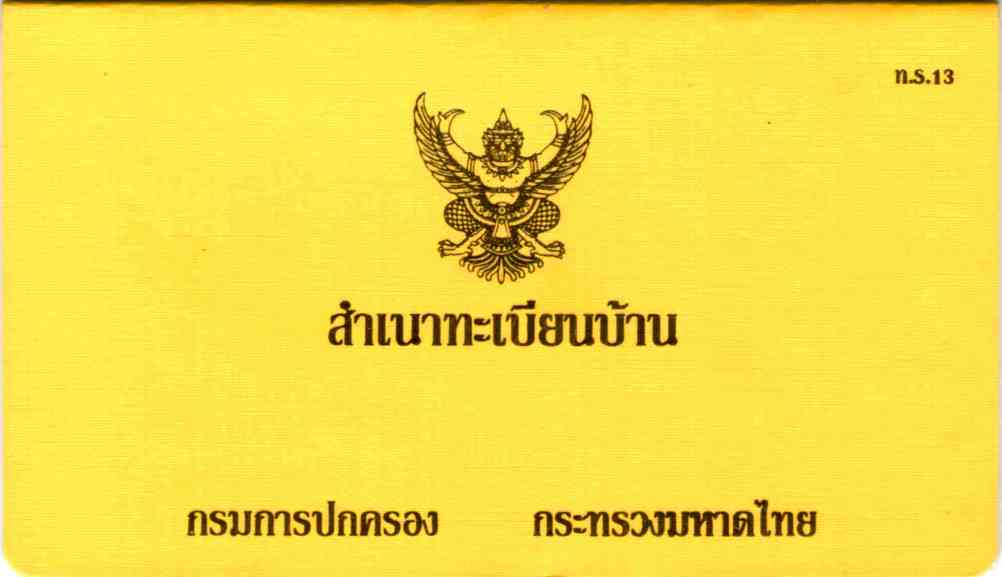 Thailand Information. If you own property or land in Thailand you are given a little blue book with all the details inside it, a bit like the deed of a house except it is more personal. You only get this if you have actually paid for the house in full; it is in effect confirmation of your residency in Thailand. It is possible, as a foreigner, to get a yellow book containing the same information and it can help to have this when doing things like getting a driving license, otherwise you have to traipse off to the British embassy every time to get them to produce a document confirming your residency here. Ploy is on a mission to get this document, the tabien baan.

At 10.00a.m. this morning Ploy (my wife) and I arrived at the local Amphur offices. The job today was for our Poo Yai Baan, the village ‘elder’, although she is in fact half my age, and another elder village person to state to the bureaucrats there that I do, in fact, exist. All the forms that Ploy spent half a life time accumulating have already been accepted but further proof was needed that I am in fact physically present in this universe and not some crazed creation of drugged up loony. I have met the Poo Yai Baan a couple of times and was at her wedding and I have been to the house exorcism of the elder man (ex-army, 70 years old and respected, although obviously a button short of a full tunic) and they are to be my vouchsafes. My wife, whom I have been married to for nearly fifteen years and with whom I share a bed, was deemed unreliable. My own presence was similarly disregarded. It was all rather existential and I found myself doubting my existence; Wittgenstein would certainly have approved of this thoroughness, at least if I was a rhino.

But we were all turned away. After ten minutes of everyone wai-ing deferentially to my guests we were told they were understaffed today and could we come back another day. I suggested we jump to the front of queue, all eight people, given the import of who we had with us, but no, we obediently traipse away – even our Poo Yai Baan defers to little Hitlers.

I have read of this foreigner’s tabien baan being given out with little but a brief perusal of some documents. But do these people know they really exist; that extra assurance is worth the additional visit and the complete waste of my, and others, bloody time.

If you offered me the Tabien baan now, on a silver platter, gilt edged, encrusted with diamonds and with pages made of million baht notes I would wrap it around a grenade, pull the pin and ram it so far up your arse your head would blow off first.

It had been two hours. The four of us sat in front of the empty position, the only one that was womanned. The woman that should have been behind the desk was sat behind her computer, occasionally typing something before staring at the screen, transfixed as if an alien was sending her suggestive messages. To her left, at the back, was the supervisor who was sat staring at her screen, very occasionally answering a question from a member of staff, something she did without looking up or with any change to her frozen death mask of a face. To my right was Ploy, and then Khun Loom and Khun Am, my two guarantors for my yellow tabien baan. It has been three weeks or maybe more since we last attempted to get my application pushed forward; now we were back and there still only one desk open, the same supervisor sat at the back and two busy girls in the corner doing ID cards. The number of people waiting was the same as before – I am sure they were the same people – but today we were told to sit. And wait.

‘But they have already accepted our papers, doesn’t Khun Loom and Khun Am just need to sign something to say I am who I really am’.

The woman rose and gestured to Ploy. She needed to see the original of our translated marriage certificate.

‘You have already seen it’, said Ploy.

She didn’t argue more and left us to drive home and collect it. By the time she returned the ID cards of my guarantors had been copied and after reading four pages of closely typed Thai they duly signed each page and handed them over to the woman.

”What are your parent’s names?’ the woman asked me.

I sighed, loudly enough to rustle the mountain of papers on her desk. Are you just going to keep asking questions until you find one I can’t answer so you can refuse this application. You should try basketball, I know sod all about that. Ploy smiled, well grimaced really. We had already agreed I got to hit this woman first although Khun Loom wanted seconds ahead of Ploy. Khun Loom is 74 years old and although fit for his age I think was beginning to feel his life ebbing away. We have the Poo Yai Baan with us but apart from the fact I think they didn’t turn us away this time (I am sure they were going to without her presence) she didn’t seem able to hurry things along. Again we sat watching the woman occasionally press a key on her computer.

She suddenly printed out reams of paper. She collated them, slowly as that was the only speed known to her, stapled them in bunches and presented them to the supervisor who for the first time looked up from the necrophilia website she was perusing. And so we sat, hushed, with just the hum of the computers, the whirr of the fans and buzz of the mosquitoes for company. Slowly she turned the page. And then another. Two and half hours had now had passed. In one hour they would close – their plan is now clear. She murmured something in Thai. They both examined the offending text; slowly. Our woman went back to her computer and starting slowing typing, staring at the screen, and typing again. She then printed the entire thing out again, three times. It was handed back to the dead supervisor. She slowly read page one again.

This time it was accepted. We were all gestured forward so the grand signing could begin. All of us had to sign each page of our own copies. All had to sign the last page of all copies. And then the woman sat in front of us and filled in another form by hand, with the same details meticulously copied from the computer print outs.

‘I can write Thai quicker than her’.

‘Nearly there’, said Ploy and she grabbed my arm again.

We were told to sit again.

Twenty minutes went by and again we were gestured forward to sign these handwritten papers. She then stapled the handwritten forms to one copy of the computer forms and collated them together. She took them to the necrophiliac woman. She perused them, slowly. She said something I did not catch. She returned to us and asked for another photo of my handsome self. She glued it in the middle of a plain sheet of paper and thrust an ink pad in front of me. She wanted my fingerprints. I looked at Ploy.

‘Did you need to do this for your tabien baan‘? ‘She can’t ask for this, if she wants a police clearance certificate then the police need to do it – we should know, we have done enough of them’.

‘Just do it!’ implored Ploy.

I was so near breaking point. I clenched my fist but the woman moved to the back of the room anticipating my first blow. I pictured myself pummelling her podgy face, blow after blow raining in on her. Ploy forcefully unclenched my hand, grabbed my fingers and put ten blue smudges on the paper.

The woman returned from hiding, took the paper and added them to the pile. The dead woman rose, Nosferatu style, and approached us, but not so close as to leave the darkness of her corner of the room. I noticed there were no mirrors. We are on holiday for five days now she told us. The forms have to be signed by my superior. We will call when the tabien baan is ready.

We slowly filed out, each wai‘ing the undead as we left. We drove home, stopping for a bite to eat and a welcome cold beer or two. Never again, we said in harmony as we toasted each other.