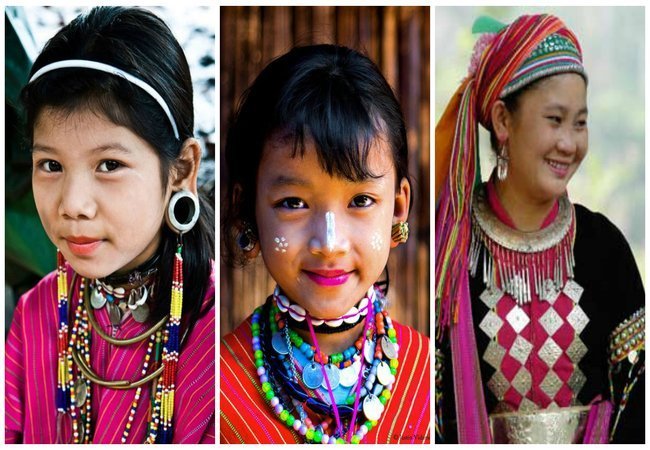 Thailand Info Khao Ho or Ang Mi Thong Festival. This unique Karen festival is to help return wandering lost souls and to show more of the rich culture of these ancient people

Khao Ho or Ang Mi Thong Festival (ประเพณีกินข้าวห่อ หรือ อั๊งหมี่ทอง), is a spiritual festival of the Karen people living in this western province of the Kingdom. While The Karen of Thailand mostly live in the more remote mountainous areas due west of Chiang Mai in the Mae Hong Son Province, in Ratchaburi 1.1% of the population are members of what is coloqually termed as Hill Tribes, mostly Karen with most living near the border to neighbouring Myanmar

For the local Karen people this annual festival is a time to appease the demons, as they believe that the ninth lunar month is an ominous time when ghosts and evil entities hunt and eat “Klar”, the spirit of people.

The 37 spirits of each Karen

A hugely important Karen Animist belief is that everyone has thirty-seven klar (also known as ‘Khwan’ or spirits) living within them: thirty-six minor klar and one major klar. If one or more minor klar wander away from the body, the person may become sick, Klar are known to be quite fickle and some simple love to roam, which can result in the soul being unable to return to the body, because it gets lost or is caught by evil spirits.

It is also believed that if the major klar wanders away the person may become crazy. In either case to call the Klar back to the body a traditional healer will conduct a ‘Phook Khaen Riak Kwan Ceremony’, where the wandering klar is lured back with incantations, gifts of fruit, cooked rice and betel nut. After the ceremony, a red string is tied around the wrist of an adult, or the neck of a small child, to prevent the klar wandering away again, (it is said that if all thirty-seven klar leave, a person they will die).

Tying White String around the Wrist

‘Baci’ is an  important ceremony practiced in Lao culture plus Northern and Isan Thai culture, and is considered aphi ritual (“religion of the Gods”), it is used to celebrate any number of important events and occasions, such as births and marriages, entering the monk-hood, departing or returning home, beginning a new year etc.

The ritual of the baci also involves tying strings around a person’s wrist, (normally white in colour) to preserve good luck, and can be seen almost everywhere in the Kingdom of Thailand.

Food at the event

Another difference in this local Karen festival is in the food that is offered, in this ceremony, people cook “khao ho” which is sticky rice molded and wrapped into a cone shape, which they then steam similar to khanom chan. The Khao Ho, once cooked is dipped in either honey or coconut.

What more to expect

The day is also the chance for guests and visitors to immerse themselves in Karen culture, with numerous performances in folk music and dance. There are also demonstrations in the traditional Karen pastimes; a race with a basket on ones back, an oily pole climbing competition, the game of tossing Saba seeds, plus of course your chance to try more traditional local delicacies such as Kaw Naw and see many local handicrafts.

While this festival is a uniquely Ratchaburi event, it is your chance to witness first hand some of the traditions of these ancient people, who like most of the Hill Tribes of Thailand were persecuted and driven from their home lands to eventually seek sanctuary in the Kingdom of Thailand

Not to be confused with the other festivals around the kingdom held to appease the ghosts that will walk once more among the living, they are The Festival of the Tenth Lunar Month, which is mainly a southern festival, the biggest held in Nakhon Si Thammarat, Southern Thailand. The Por Tor Festival or ‘Hungry Ghost Festival’, that is held annually across southern Thailand. The Tiggkrahad ritual is also is similar to the purely Thai event; Festival of Offerings to the Dead (Sart Day) วันสาทรไทย, which is held all over the Kingdom and the purely Mon festival, The Mon Floating Boat Festival, which is held in September in the same district.

Please Pick A Star Rating Below