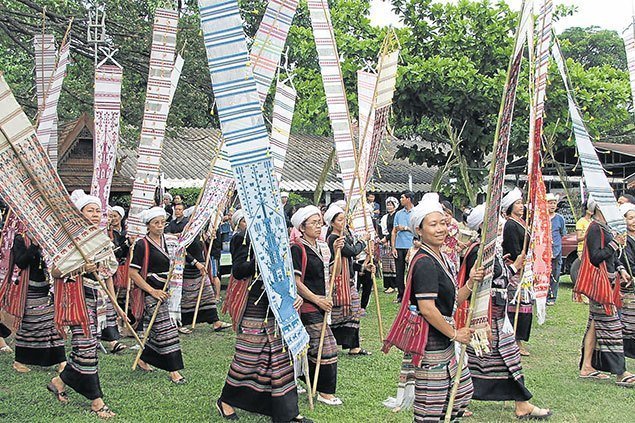 Thailand Hill tribes The Thai Lue. The story of a people, who for centuries been quietly ignored, and whose culture has blurred, with the passing of time and their assimilation into their new homes here in Thailand

Although the Thai Lue people, unlike many other Hill Tribes now in Thailand, have their own written language their earliest history is little known and is greatly disputed.

According to some, the Tai Lue people entered the mountainous province of  Yunnan located today in the far southwest of the China, displacing its earlier inhabitants, including the modern-day Akha, sometime in the eighth century and prior to the rise and dominance of the Nanzhao Kingdom.

No evidence is available to verify these claims and it is said that it is more probable that they simply made up a small, non-dominant section of the population that would later be ruled, as a province of China, by the Mongol Yuan dynasty.

Chinese control of the province was minimal until 1325, when a Tai Lue chieftain was appointed Chinese commander-in-chief, based in Jing Hong, the then capital of the province and the Tai kingdom of Sipsongpanna. (Sipsongpanna (Thai: สิบสองปันนา) means “the twelve thousand fields” or “the twelve principalities”). The extent of the kingdom varied over time, but in the pre-colonial period it included Muang Sing, now in Laos, and parts of the Tai-speaking areas of Myanmar.

Sovereignty over the region fluctuated between the Ming and Qing dynasties (fourteenth to seventeenth centuries), local rule, and the Toungoo dynasty of Burma.

Chinese Revolt and a New King

The province was to suffer from a number of hostilities both internal and external, including the  largely forgotten, but bloody Panthay Rebellion of the Muslim Hui people and other local minorities against the Manchu rulers of the Qing Dynasty, which caused the deaths of up to a million people in Yunnan

Sometime later during the middle years, of the nineteenth century much of the region was in open revolt, against Chinese attempts to impose land taxes, along with their desire to remove the powers of the Lue chieftains; whose position was based on hereditary succession.

The outcome of these hostilities, was joint authority vested in Chinese magistrates and Tai chiefs. The still Tai Leu chief of Jing Hong, was recognized as the ruler over the surrounding chiefdoms, with the title of cawphaendin, which translated means “king.”

During World War II, the region suffered heavy bombing, due to the presence of Japanese troops, with the result that many Tai Lue, sort refuge in Burma and northern Thailand. Later with the victory of the Communists in 1949 and the establishment of a Communist administration in Sipsongpanna, the kingdom officially ceased to exist and more and more of its people fled the region: the last king is reportedly an academic in Kunming, now the capital and largest city in Yunnan Province.

During the hundreds of years that Chinese rule extended into Sipsongpanna, the Tai Lue forged cultural links, political alliances, with their Tai speaking cousins in Burma, Thailand, and Laos. Sharing very similar languages with these people, they also developed similar forms of Theravada Buddhism, in which they subscribe to Buddhist beliefs about the nature of heavens and hells, rebirth, and final enlightenment. Running alongside these beliefs the Tai Lue also practice their more ancient folk animism beliefs and rituals. For more on their major festival in Thailand see our post Thai Lue Cultural Festival

The Tai Lue like many of the Hill Tribes, believe that non-human objects have spirits, (known as phi) and that people have multiple souls. Of major importance are the territorial deities. The deity Phya Alawu (sometimes called Arawi), who parallels legendary figures in northern Thailand and Luang Prabang in Lao, and is said to have the status of protective spirit for the entire Tai Leu people.

In addition, they practice ancestor worship (praying to deceased ancestors for guidance). A point of interest is witchcraft accusation, is common in village life, as it is in many of the Hill Tribes.

There is a total world population estimated at 1.2 million people, with the majority still living in Xishuangbanna ( Tai Lue autonomous prefecture in the extreme south of Yunnan Province, China. The prefectural seat is Jinghong), where they are one of 56 officially-recognized minority nationalities of China and where they are known as Dai.

“Dai,” “Tai,” and “Thai,” are different versions of the same ethnic name. While Dai is used by Chinese writers, Tai is favored by many Asian and Western scholars to denote the same ethnic group living outside of China. Thai is generally used associated with the majority peoples of Thailand.

The population in Thailand, where they are called Thai Lue (Thai: ไทลื้อ), was in 2001 estimated to be approximately 83,000. Most Thai Lue in Thailand live in Nan, Chiang Rai, Phayao and Chiang Mai Province. They can also be found living in Lao, Burma and Vietnam, along with sizable population in Taiwan.

The Thai Lue unlike almost all other Hill Tribes, do not use ‘Slash and Burn’ farming techniques, but instead are predominately wet-rice agriculturalists. A wide variety of other crops—cotton, sugar, and tobacco being among the most important—are also grown, as are maize, beans, and a variety of vegetables.

They are also known for their weaving and the manufacture of elaborate textiles, which have been important aspects of rural life for centuries. Since moving to Thailand they are increasingly dependent on such things as the making of reed brooms and employment in factories as cutters and polishers of precious stones.

Traditionally Thai Lue homes would contain a matrilineal, ancestral shrine characteristic of northern Thailand, used in rituals regarding marriage and the control of sexual behavior.

Thai Lue once only cremated monks and very old people, burying others, except those having “unfortunate” deaths. Their continued contact with Thai society has meant that, the once common ancestral shrines are disappearing and more and more burials, are taking the guise of Thai funerals – with ceremonies that include solely cremations.

The language is similar to other Tai languages (The term “Tai” is used for all Tai-speaking people) and contains many words from Indian, Pali, as well as from the many local Chinese dialects, prevalent prior to communism, along with modern Standard Chinese.

Tai Lu is written in two different alphabets. The old writing system in China, was reformed in the 1950s, by the communist government, the new alphabet is a simplified version of the old script.

Old Tai Lu: Is readable by the most of its people and is still almost solely used in Burma, Laos, Thailand and Vietnam. Both writing system’s, are derived from the Mon people’s script and accordingly looks similar to Burmese writing.

We have included the Thai Lue under the heading ‘Hill Tribe’ (Chao Khao), Due to their location in the mountainous North of Thailand, plus their ties with other Tai ethnic groups that also share the mountains and the same title. The term Hill Tribe first appeared in Thai official documentation in the 1960’s, recent history has given a new official term, that of the “highland Thais”.

The world is moving too fast for the Thai Lue

While the Thai Lue  have been living in Thailand for centuries, most of any worthy information, on these ancient people, is mainly from religious organizations and charities. Who for centuries have tried, and continue to do so in vain, to change people’s religious beliefs across Asia.

To achieve their own goals they have amassed, though sketchy and biased in some areas, some of the only readily available information, on the culture and practices of the Thai Lue.

What has become clear on researching these ancient people, is that unfortunately they are slowly but surely, losing their heritage, due in part to their cultural assimilation into their chosen new homes here in Thailand.

For more on other ethnic minorities in Thailand click on any of our posts listed below:

The Seven Hill Tribes of Thailand

A Snapshot of the Phuan

The Haw in Today’s Thailand

The Yong and their Salak Yom Festival

The Shan the forgotten Hill Tribe