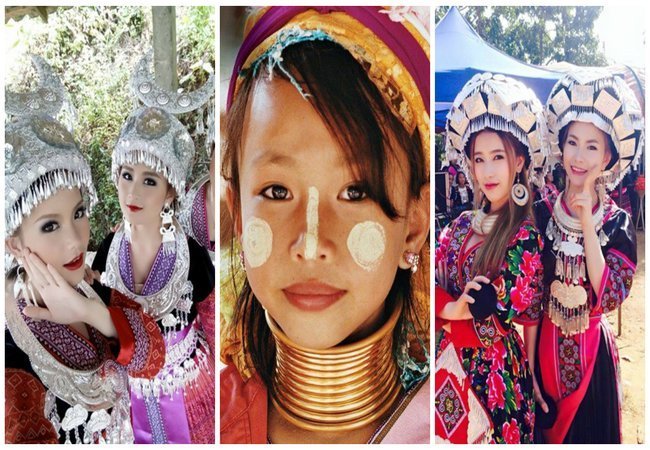 Thailand Hill Tribes The Haw. Many guidebooks describe the Chin – Haw people, (generally shortened by the Thai people to Haw), as the Kingdom’s “Chinese Hill Tribe”. But unlike the other better known Hill Tribes, who share the mountainous areas in Northern Thailand, this ethnic group (long recognized as a Chinese speaking national minority within China), do not have their own traditional dress and neither do they have their own unique cultural festivals.

Furthermore the Haw people are of varied ancestry, many directly descending from Silk Road travelers and have for centuries have been known as traders and in sometimes as what might be termed as mercenaries, this is complete contrast to Thailand’s Hill Tribes were they continue to be subsistence hill farmers.

It is said that the Haw themselves, dislike the Thai term “Chin Haw”, which they say is “meaningless and misleading”, they also do not see themselves, or wish to be seen as a distinct ethnic group and prefer to be known simply as Chinese.

This disdain for the name may also be part due to the fact that their ancient descendants had a checkered and at times bloody history, with the Kingdom of Siam see more, which culminated in their eventual defeat at the hands of the then Siamese army and the end of the Haw Wars; 1865 to 1890.

The Haw are from the mountainous Yunnan province of the People’s Republic of China, located in the far southwest of the country, with borders to Vietnam, Laos, and Burma. In their former homelands they are considered hardy frontiersmen, as a result of this they are often cast as ‘hard men’ in local movies, while the people of Thailand, Laos and Burma see them generally as ‘rustic, unsophisticated and tough.

Northern Thai chronicles detailing events as far back as the 13th century generally use the term Haw to refer to the Yunnan Chinese, whether as traders or soldiers. It is reported the Haw came to what was centuries later to be called the ‘Golden Triangle’, as did others, not to solely trade not in ‘Opium’ that had been cultivated and marketed for centuries, along the Mekong River, in the fields and mountains of the, Lao-Myanmar-Thai borders area, but for all sort of local produce.

Intensive cash-cropping of opium poppy did not come about until around 1870. (The term “Golden Triangle” was reportedly first used by Marshall Green, United States Assistant Secretary of State, at a press conference in July 1971). Prior to 1870 opium was mostly grown in backyard gardens, for use as a medicinal substance in treating pain, dysentery, cough, and the symptoms of malaria.

Some 250 years later, they have immersed themselves totally into the mountainous regions, financial and cultural affairs, so much so that their native dialect of Yunnanese Mandarin has become a common language for the different tribes

In ethnic terms they are divided, more or less evenly, between two sub groups, Hui (Muslims) and Han (Buddhists). Many of the Hui trace their arrival in the Sino-Thai borderlands to the failure of the great Yunnanese Muslim rebellion in 1878.

While the Han are seen as more recent arrivals, refugees from war and revolution during the warlord era, or more particularly Kuomintang troops and their descendants who fled to Burma and Thailand following the communist seizure of power in Mainland China during 1949.

Their reputation took a hammering in recent times, when  Joel John Barlow wrote in  February 2011; “Drugs and Cultural Survival in the Golden Triangle” which stated ‘Muslim Chin Haw have links to triad secret societies in cooperating in the drug trade, working with other Chinese groups in Thailand like the Teo-Chiew and Hakka and the 14K Triad. They engaged in the heroin trade. Ma Hseuh-fu, from Yunnan province, was one of the most prominent Chin Haw heroin drug lords, his other professions included trading in tea and as an hotelier’.

Whether Han, Hui or simply Chinese, good or bad these migrants, in their eyes are certainly not a “Hill Tribe”, they are, however, very definitely an integral and important part of life throughout Northern Thailand and in the most part have been in the region a lot longer than most of  Thailand’s Hill Tribes.