Thailand Hill Tribes Tai Yai. While the Tai Yai  (Shan) people have lived in the mountains of northern Thailand longer than most other tribes, they are not commonly seen as Hill Tribes. The term ‘Hill Tribe’ (Chao Khao) first appeared in Thai official documentation in the 1960’s, recent history has given a new official term that of the “highland Thais”.

The Shan people live primarily in the area that is today known as the Shan State of Burma and have done so for over a thousand years, they themselves call the area Muang (or Mong) Tai. Due to the ever changing Kingdoms and their boarders in Asia they also inhabit parts of its neighbouring countries India, China, Laos and Thailand. It is fair to say that one cannot speak of a single Shan culture but rather, a set of common values, culture, religious beliefs and language, with variations within specific societies.

While it is known the Shan People migrated from Southern China around A.D.1000, ahead of the Tartar/Mongol armies, their earlier history is little known. It is believed they played their part in the Nanzhao “Kingdom” (Nanchao or Nan Chao – น่านเจ้า); inhabited by the Tai in southern China during the 8th and 9th centuries, (Tai refers to the wider ethnic group while Thai describes the inhabitants of Thailand). As this Polity began to lose its control over its southern borders in part to the Burmese kingdom of Pagan, (which would eventually be destroyed by the Mongol invasion of 1238), the Shan filled the vacuum that was left behind, establishing numerous small states in the mountainous region, of northern Burma and much later into northern Thailand.

These newly acquired highly autonomous Shan States were ruled by hereditary rulers called Saopha, (sao pha, chaofa, sawbwa, or saw-bwa), literally meaning “lord of the heavens” or “lord of the sky”  who in turn and at various times paid tribute to Burma, China, and the Lanna Kingdom, (sometimes simultaneously).

This add hock monarchy system continued  until 1922 when under British colonial rule the Federated Shan States were formed and the saophas’ powers were reduced. However, they nominally kept their positions as well as their courts and still played a role in local administration, until they collectively relinquished their titles in favour of the Union of Burma in 1959, nine years after Burma won its independence from British rule and the many Shan states were consolidated into the single State. (Shan State today comprises approx. one quarter of the land mass of Burma.)

Since the 1950s the Shan in Burma who are the second largest ethnic group, have been engaged in a military struggle to regain control of their homeland. The Shan in Thailand are not engaged in this struggle, but in 1902 the “Shan Rebellion” was the last act of overt opposition against Bangkok to have taken place in northern Thailand.

The Shan symbol is a tiger. The Shan flag consists of horizontal yellow, green and red stripes with a white circle in the middle. Yellow stands for Buddhism and that the Shan are part of the yellow race. Green symbolizes the verdant landscape, a warm climate and rice farming. Red symbolizes the Shan’s courage. The white disk is for the moon, the Shan’s pure and peaceful spirit. It is forbidden to use this flag in Burma and Thailand.

It is impossible to get accurate statistics due to the difficult situation in Burma. Also the population would depend on which of the many various Tai groups were included in the figure. According to some Shan leaders there are 30 million Shan in the world. According to the Burmese military regime, there are 4 million Shan in Shan State, making up about 10% of the population in Burma. There are estimated to be several hundred thousand Shan in Thailand. In recent years there has been a steady exodus of Shan from their home territory.

The Shan in Thailand

Most Shan are Theravada Buddhists (it is said  “To be Shan is to be a Buddhist”.  Quote from the shan outreach center), with the majority speaking the Shan language; which is closely related to Thai and Lao. Their script is based on Mon and mainly used in the Shan State and in a few Shan communities in Northern Thailand. They live mainly in the North Western provinces of Chiang Mai, Chiang Rai and Mae Hong Son. In the later province, the Shan make up the majority of the local population, having founded the town in the 1830’s.

The people refer to themselves as “Tai,” often with a second term identifying their particular Tai group, e.g. Tai Nue (Northern or Chinese Shan), Tai Lam or Dam (Black Shan of Laos, China), Tai Sa (Chinese Shan), Tai Lue (Lanna, Thailand; N. Laos, Xinxuangbana China), Tai Long (Thailand, Central Shan State), Tai Leng (Kachin, Shan State border), Tai Loi (Mountain Shan/Hill Shan). There are many other groups who are more or less related to the Shan, but there are approx 12 largest groups who are the most closely related. All consider themselves “Tai” regardless of which group they belong to. Some would say only the Tai Long are Shan.

The name “Shan” is a term thought by many to be given to the Tai by the British, but it was the Burmese whose ancestors migrated from Tibet who called the Tai Yai “s-i-a-m.” In the Burmese pronunciation of this word, the “s” and “I” are spoken as “ch” or “sh” while the “m” is pronounced as an “n.” Consequently “Chan” and “Shan” sounds the same as “Siam.” In addition to the Burmese, evidence from ancient times also exists that other groups such as the Chinese also called the people of the Tai family “Siam” or “Seam”. [Tai in Southeast Asia by Teerabarb Lohitkun. English by George A. Attig, Nanthiya Tangwisutjiit Bangkok: Manager Publishing, 1995 (128 pages) p. 82].

Most Thai people regard them as “Thai Yai” (meaning big or great Thai), this is due to the fact the Thai’s traditionally have believed that the Shan were their ancestors, while some of those from north of the Kingdom regard their Shan neighbours as “Ngio” or “Ngiaw,” a term Shan find insulting, they themselves like to be referred to as “Tai Long” (the great Tai)

Kin terms distinguish relative age and sex with different terms for older/younger siblings and older/younger siblings of one’s mother or father. Kin terms are used primarily as terms of address because Shan do not refer to people by their name without an address term or title. Even when using titles such as “teacher” or “ex-monk,” a kin term precedes it. While many Thai people will also use kinship terminology, it is not as pronounced, as in normal day to day Shan life.

While today the majority of Shan are farmers growing rice to eat and a variety of crops to sell, they are also skilled artisans. Their crafts range from making fans out of bamboo and paper, to making jewelry out of the metals and the precious and semi-precious gemstones, that were once mined in many parts of Thailand and neighbouring Burma.

It is believed the skills they learnt as gold smith, was gained from their close proximity in northern Burma of the Mon people who they were later to take their lands. (Thailand has long been famed for its wide range of precious and semiprecious stones, but increasingly few are actually mined in the Kingdom, while yet others, such as diamonds have never been extracted from Thailand’s mineral deposits).

Due to the people strong beliefs in Buddhism there is a traditional Buddhist holiday every month. Songkran, (or the Water Festival) is celebrated in April, which also marks the beginning of the Buddhist year. Around the same time the people celebrate their sons becoming monks in the beautiful Poy Sang Long Festival

Chinese New Year is celebrated in February. Possibly the biggest Shan festival is Poi Loen Sip Et which takes place during the end of Buddhist Lent (16th October 2016). November is celebrated as the end of Kathin and in Mae Hong Son they hold the Wat Phra That Doi Kong Mu Worshiping Ceremony. The later two festivals are known for their cultural displays featuring Shan dancing, music and extensive merit making activities.

Their clothing is usually colorful, women wear a wrap-around tube skirt called a longyi (or sarong) and snug fitting blouse, and traditionally wear their hair up in a bun with a colorful band wrapped around their head. Men wear baggy trousers and a Chinese-style shirt, sometimes with a turban.

Buddhism and the spirit world

While the Shan are Theravada Buddhists, their rituals and holy texts have been greatly influenced by Burmese Buddhism, including the belief in Nats or spirits that exist in the spirit world. Most important of the nats are a group collectively called the “thirty-seven,” made up of spirits of human beings who have died violent deaths. They will aid worshipers in accomplishing important tasks, vanquishing enemies and so on, when kept properly propitiated and of causing harm when offended or ignored. 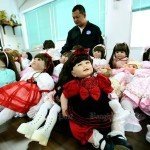 Other types of nats are nature spirits; hereditary nats, whose annual tribute is an inherited obligation; and village nats, who protect a community from harm, in Thailand a similar spirit is called phi. The Karen people, found in the same regions of Thailand, also believe in these types of spirits which they call Klar and which there are also 37.

All Shan boys around 12 years old enter the monkhood for a short period of time, while some become monks again later in life for a longer period of time. They believe that the way to happiness it to renounce the world and carnal desires. They also believe that the physical and the spiritual are closely intertwined. See our post on their ordination ceremony Poy Sang Long

Tattooing is common among Shan men. The tattoos are often Buddhist connotations or signs, placed there in an effort to ward off evil spirits and protect the person from danger. Tattooing is also considered a sign of manhood in Shan society.

The Shan’s Murky past

Until as recently as the early 1990’s the infamous Golden Triangle of Northern Thailand was still in the business of opium cultivation, it was not until world pressure and the local hill people, being given the tools and educated of how to grow other crops, including tea (see our post From Opium to Tea), did this long term problem almost cease in the Kingdom.

The Golden Triangle refers to a wide swathe of northern Southeast Asia comprising northeast Burma — the Wa and Shan states — northern Laos and northern parts of Thailand, primarily Mae Hong Son, Chiang Rai and the upper districts of Chiang Mai province. It was called “golden” because the wealth of the region was largely derived from black gold, or opium.

Thailand Hill Tribes Tai Yai. Opium has been present in Burma since as early as the 1750s and has historically been a major contributor to the county’s gross domestic product (GDP). Burma is still the world’s second largest producer of opium after Afghanistan, producing some 25% of the world’s production. Production is mainly concentrated in the Shan and Kachin states. Due to poverty, opium production is attractive to impoverished farmers as the financial return from poppy is 17 times more than that of rice. (UNODC)

Thailand Hill Tribes Tai Yai. The master of this Opium production was a Shan warlord called Khun Sa, also known as Chang Chi-fu; (17 February 1934 – 26 October 2007) born in Hpa Hpeung village, in the Loi Maw ward of Mongyai, British Burma. He was dubbed the “Opium King” in Myanmar due to his massive opium smuggling operations in the Golden Triangle. He was also the commander-in-chief of the Mong Tai Army from 1985 to 1996 and the Shan United Revolutionary Army in 1996.

For more on our posts regarding other ethnic people of Thailand

The seven Hill Tribes of Thailand

A snapshot of the Phuan

The Haw in Today’s Thailand

The Yong and their Salak Yom Festival