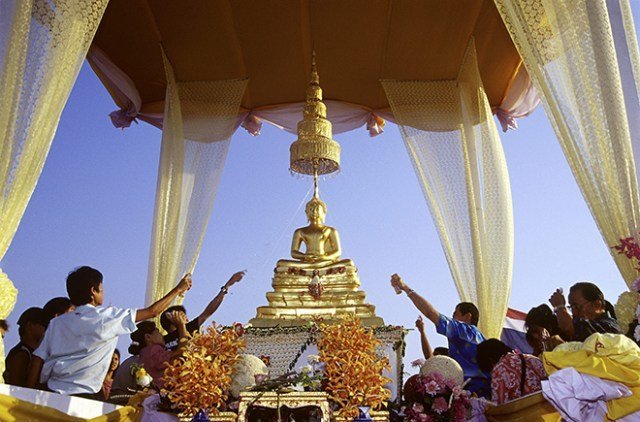 Thailand Grand Songkran Celebrations. Songkran Festival, which takes place nationwide in Thailand, is an event where boisterous fun and ancient traditions go hand-in-hand. For tourists, the event offers a chance to enjoy a huge celebration where water parties break out in the streets of Thailand’s towns and villages. For locals, it is a time when they can spend precious time with families and visit the temples to observe ancient rites and make merit. There’s no doubt that it is a fascinating time to be in Thailand wherever you travel.

Thailand Grand Songkran Celebrations. So here’s a region-by-region round-up of some of the best nationwide Songkran Festivals to be enjoyed in 2018.

Songkran in the Central Region

Songkran Phra Pradeang, Samut Prakan (20-22 April): Taking place at the Phra Pradaeng City Hall, this is one of the most fascinating ways to celebrate a Songkran near Bangkok. Phra Pradaeng is where the local people observe Mon ceremonies in a traditional way, and their New Year traditions are very different to those found in the rest of Thailand. For a start, the celebrations here take place a little later, and feature a range of cultural activities including a spectacular floral procession, a parade of the local Mon people in their colourful traditional outfits, a Miss Songkran parade and Mister and Miss Songkran Beauty Contest. Visitors will also have the chance to join merit-making activities in the local temples, pay respect to community elders and enjoy folk plays and cultural performances.

Thailand Grand Songkran Celebrations. Songkran Supanburi 2018 (13 -14 April): To appreciate how Songkran is celebrated on Thailand’s central plains, visitors should head to Supanburi which boasts one of the biggest New Year celebrations in the country. Many people come here to cool off with the water splashing but there are also many traditional elements of Songkran to appreciate. You can see the golden Luang Poh Toh image as it’s paraded through the streets of the town and appreciate cultural displays from ten different ethnic groups from the region. There will be a contest to see which of the displays in the parades are best as well as a Miss Songkran pageant. Throughout the festival there will be concerts from well-known Thai artists and folk and cultural shows performed by local students.

Songkran in the Northern Region

Thailand Grand Songkran Celebrations. Paweni Pi Mai Muang Chiang Mai Songkran Festival 2017 (12-15 April): The best-known Songkran celebrations in the whole of Thailand take place in the northern city of Chiang Mai. Here you’ll find a wonderful balance of water-based fun and sacred ceremonies that show the religious importance of this festival to the Lanna people. In Chiang Mai, Songkran is often called Paweni Pi Mai Muang. Highlights include the procession of Chiang Mai’s prominent Phra Buddha Sihing image as well as bathing the image, and taking part in a parade bringing sand and Sali(the Bodhi tree) clutches to temples, cultural events and performances. There is also a lot of tasty northern cuisine to enjoy in retro Thai Lanna market.

Pleasant Songkran, Thailand-Laos’ New Year, Nakhon Phanom (13 – 15 April): Organised each year in Nakhon Phanom with activities taking place at Laan Phanom Naga in Muang district, the event is based on the traditions of seven tribes who traditionally settled in this area. Many of the traditions mirror those found in the rest of the country including almsgiving for local monks and the building of sand pagodas. But there is also the chance to take part in religious activities that originate in Laos such as the Bai Sri Su Khwan spirit blessing ceremony believed to bestow happiness and prosperity on others.

Grand Songkran Isan Nong Khai (13-15 April): During this festival, visitors get the chance to bathe the revered Luang Por Phra Sai Buddha image as it is paraded along Jenjobtid Road, to the Naga fountain, to Prachak Road and finally Wat Pho Chai the Royal Temple in Mueang district. This procession of Luang Por Phra Sai is held only once a year for worshippers Thai and Lao to pay homage to this sacred Buddha image. As well as the parade there are many other traditional Songkran activities taking place many with a distinct Lao theme.

Dok Khun, Siang Kaen and Khao Niew Festival (8-15 April): This is one of the biggest and certainly the best known of the Songkran events in the Northeast of Thailand. As usual, this year there will be a lot of activities to enjoy that reflect the rich local culture, including a flower procession and contests to find the best blooms, water rituals to pay respects to images of the Buddha and seniors and a fun water splashing event at Bueng Kaen Nakhon and Sri Chan (Khao Niew) Road. There will be lots to eat and buy too, with demonstrations of local handmade products and crafts.

Songkhla Grand Songkran Celebration & Hat Yai Midnight Songkran 2018 (12-15 April): In Thailand’s south, the Songkran fun takes place in Hat Yai, so head downtown if you want to join in. The main action takes place on the streets of Nipat Uthit 3, Sanehanusorn and Thammanoon Vithi. Here there will be free music and concerts as well as other entertainment throughout the event, every day between 10:00 – 23:00 Hrs. with the highlight being the Songkran Carnival parade.

Sand Pagoda Ceremony on Lai Day, Bangsaen District, Chon Buri (16 – 17 April): This charming event celebrates not only Songkran but the gorgeous natural sand of the district. People of the Sansuk district flock to Bangsaen beach to build sand pagodas in a tradition known locally as the ‘Tam Bun Wan Lai’ day. The event sees local people come and celebrate together with activities such as sea boxing, pagoda competitions. As well as the sand pagodas, other amazing sculptures are made during the festival using the sand on the beach with many teams working all night to create unique pieces of art such as dragons, historical tableaus, elephants and amusing scenes. There is also a competition to choose the best sculpture before the sand is returned to its natural state.