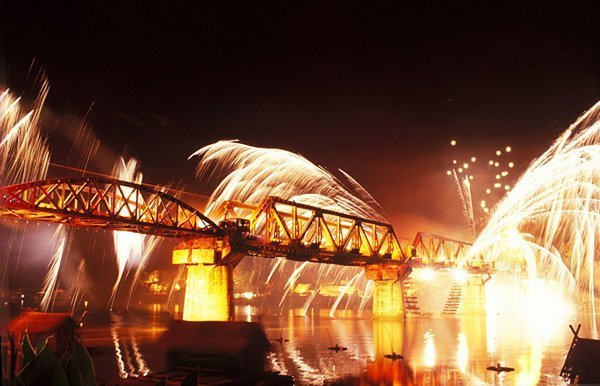 Thailand Festivals River Kwai. In this quiet backwater of central Thailand lies one of the planet’s most infamous man made constructions; that of the world famous River Kwae Bridge built by Allied prisoners-of-war and forced labour, during World War II. The bridge forms part of the infamous ‘Death Railway’ that connected Thailand and the then Burma

This now immortalized concrete and Iron Bridge in late November and early December each year becomes the backdrop to a festival that honour’s those that gave their lives to both its construction and that of the rest of the railway.

Event highlights include several historical and archaeological exhibitions, a lively traditional Thai carnival, plus folk and cultural performances highlighting the ethnic diversity of the Province. It is also the opportunity to cross the bridge, riding on-board a World War II vintage train. Each night the festivities are brought to a climax when the bridge is bathed in a spectacular light and sound presentation re-enacting the bridge’s World War II legacy. The dazzling array of light, fireworks and music transports you back to 1942-43 when so many soles were lost to the Burma Railway, also known as the Death Railway. The light and sound show features an exciting battle scene with simulated effects, including explosions, bomber airplanes and trains racing through fire.

Thailand Festivals River Kwai. The Bridge on the River Kwai

How to get there: Whether you are going to the festival or not there are many ways to get to the bridge which is only approx. 130 kms west of Bangkok, for me the most poignant route is that of being onboard a train travelling on the track that was the ‘Death Railway’. In my humble opinion the journey from Bangkok to Nam Tok is the most memorable train journey in the Kingdom.

There are 2 trains departing daily from Bangkok Thonburi Railway Station.  (Also known as Bangkok Noi= Little Bangkok) 07.50 & 13.55. The Thonburi train station itself is very old and quite small but it does have its own charm. The ticket list price is 25 baht but because this is an official tourist line it is a fixed price of 100 baht each way. While there is a dual pricing structure in Thailand one for Thai nationals (and those with a ‘Thai Work Permit’) and one for tourists, the price in real terms is still pretty inexpensive, if you consider for the price of a few beers or a burger it will take you all the way to Nam Tok and the beautiful waterfall of Sai Yok. More on Sai Yok below. (See bottom of this page for an alternative train route)

A word of warning and a tip to help you beat the masses that will try to board the early train at Bangkok Thonburi Railway Station, if you get on the wrong side of the train you will find yourself staring at a mountain face and you will miss most of the scenic views, especially once you get to the Bridge and the viaduct. To avoid this disappointment, walk a hundred yards or so off the platform towards the direction of the oncoming train just prior to its arrival. The train slows down considerably as it comes out of the bend, jump on it here before it comes to a halt and grab your seat on the left hand-side of the train.

The train journey is not renowned for its smooth ride as the train consists of only 3rd class carriages, where the seats are made of solid unbending wood. So do be prepared to be Shake Rattled and Rolled during the 2.5-3 hour journey time. Taking this form of travel has so many advantages over simply travelling by bus or taxi, as you get the chance to feel, see and smell the real Thailand in both the scenery and the warmth shown by others sharing the same journey. There’s no buffet car, but vendors walk up and down the train selling soft drinks, beer, and pre-packed fruit and food.

The train stops at a number of small rural stations until it arrives at the city of Kanchanaburi, then onto the River Kwae Bridge station, (just before the bridge itself) before crossing over the Bridge, then it’s onto the mainly wooden Wampo Viaduct (also built by prisoners of war) before finishing at Nam Tok railway station.

A One day Ticket

If you want to cram in as much as possible on a one day visit (and are not aiming to see the evening festival), then I would suggest taking the earliest train out of Bangkok, alighting at the station just before the The Bridge on the River Kwai, taking time to explore the museum, cafes, shops and the couple of static steam locomotives, on the Kanchanaburi side before walking across the actual bridge. Do be aware of the regular trains which hoot like crazed banshees as they cross the bridge thankfully at a sedate 10kms per hour. You have to be aware of just where you can step off the tracks into the passing spaces that are all along the track

During your stroll across the bridge and while you are soaking in the sights and sounds, try to visualize how it must have been for the prisoners of war and the forced labour, who worked in the unbearable heat and rain for so many long hours, days, months and even years, with no real food or medical aid………. Frightening for most of us, who’s only real worry today is ‘what will I eat next?’

From there return back to the station and pick the next train heading to Nam Tok, again try to get the left side of the train to get the best views as you pass over the Wampo Viaduct.  Once the train finally arrives at the end of the line at Nam Tok, you should have enough time to take a leisurely 20 minute stroll to visit the Sai Yok Noi waterfall  Do take a change of clothes and enjoy a dip in the fresh water emerald pools. If you have

enough time and you like caving, around 18km south of Sai Yok Noi is Tham Lawa, which consists of five large caverns with imposing stalactites and stalagmites running for 500m. You will need to arrange a taxi to get you to both the waterfall and the caves if you want to ensure you catch the last train back to Bangkok at 15.15 from Nam Tok.

If you intend taking in the evening festivities and staying on in Kanchanaburi, see my post ‘Visit both The Bridge on the River Kwai’ & Hellfire Pass and The Sight & Sounds of Kanchanaburi.

History of the Death Railway

According to the Commonwealth War Graves Commission:

“The notorious Burma-Siam railway, built by Commonwealth, Dutch and American prisoners of war, was a Japanese project driven by the need for improved communications to support the large Japanese army in Burma. During its construction, approximately 13,000 prisoners of war died and were buried along the railway. An estimated 80,000 to 100,000 civilians also died in the course of the project, chiefly forced labour brought from Malaya and the Dutch East Indies, or conscripted in Siam (Thailand) and Burma. Two labour forces, one based in Siam and the other in Burma, worked from opposite ends of the line towards the centre.”

The Bridge on the River Kwai

What’s in a name!  While the bridge does cross a river it is not in fact the River Kwai or it was not at the time, Pierre Boulle, the author of the original book, put pen to paper. While he knew that the ‘death railway’ ran parallel to the River Kwae, he wrongly assumed that it was the River Kwae which it crossed just North of Kanchanaburi, – It actually crossed the Mae Khlung.  After David Lean’s blockbuster movie was released in 1957, thousands of tourists flocked to see the Bridge on the River Kwai, but there wasn’t one, all they had was a bridge over the Mae Khlung.  So, with inscrutable Thai thinking, they renamed the river.

‘What-ever you choose to do, be it a one day-excursion or a longer trip, the Province of Kanchanaburi has so much to offer people of all ages, so much so you may find that you will want to go back time and time again’.

Alternative train Route: There is also a special tourist train for day trippers on Saturdays, Sundays & holidays, departing Bangkok Hualamphong station. Priced at 120 Baht return fair.  It has 3rd class non-air-con seats, although some seats have more padding than others as they were originally classified 2nd class. I have as yet not travelled this route and therefore cannot comment on it. For a full itinerary see Mark Smith’s ‘The man in Seat 61’ brilliant web site

Maps and time Tables of the Thai train network

Click here for an interactive route map provided by possibly the best source of train travel in Thailand Mark Smith and ‘The man in Seat 61’ showing trains and connecting buses & ferries across Southeast Asia.

Click here for departure times from Nam Tok and Kanchanaburi

More on Kanchanaburi by road