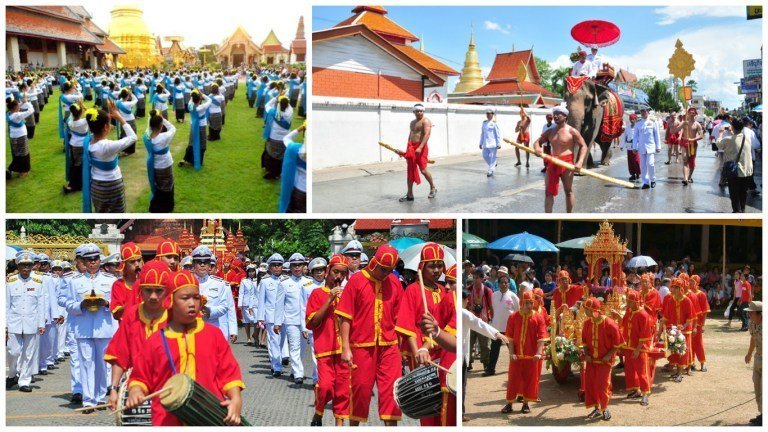 Where: Phra That Hariphunchai Temple., Lamphun Province. Northern Thailand
This annual week long celebration, (known as ประเพณีสรงน้ำพระธาตุหริภุญชัย), is an ancient Buddhist festival where people of all ages and from all over the province, come to make merit.

Wat Phra That Hariphunchai, is situated in the small town of Lamphun approx. 28 km from Chiang Mai, its earliest origins are believed to be from 897 when the then king of Hariphunchai is said to have built a stupa (now the central stupa) to house a hair of the Lord Buddha.

The south-western corner of the temple compound is also home to a stone, indented with four footprints. Worshippers believe these footprints, confirm the legend of a Buddha visit to the area, when during his daily alms rounds, he is said to have predicted that a man would in the future, build a town on that spot and call it Harinphunchai.

It is to these relics that Buddhist people from all over Thailand, have flocked for centuries, to participate in the many ceremonies that take place every day. Along with the ritual cleansing of relics held, normally held in the unusual pyramid-shaped, 46 m high Dvaravati-style, Chedi, built within the temple grounds.

Added to this tumultuous noise and colour, are a number of presentations of traditional Lanna dancing including, the Choeng Tua Auk-son Dance. Traditionally performed in the Buddha’s honor, characterized by a complex choreography inspired by the calligraphy of the ancient alphabets of the northern regions and by the movements used in martial arts. Plus the Nail Dance Fon Lep (you tube).

Where ever you go during this event you will be surrounded by The Sounds of Lanna, the Ancient Kingdom of the North. The music is played on two instruments typical of this region. The phin-phia is a stringed instrument whose body is made from a coconut shell. When played, the musician rests the shell on his bare chest, then moves it or presses it to achieve the desired tonality. In times past, the instrument was used by youths to court the maidens of their village. Unfortunately few musicians still play it. The other is a stringed instrument called a sueng, made of teak or hard wood. It is played by plucking the two metal or brass strings with a horn plectrum.

Buddhist devotees believe that this temple is one of the holiest in the Kingdom, it is also an important pilgrimage site for people born in the Year of the Rooster, as this colourful poultry is associated with a local hero King Naresuan. See more in our post Statuettes of Roosters in Thailand.

Other Festivals at the Temple

Wat Phra That Hariphunchai also plays host in September each year to the colourful Trees of gifts Festival, (see our post THE SALAK YOM FESTIVAL: TREES OF GIFTS), which is in part an opportunity to give gifts to the spirits of the deceased and for women to show their passage into adulthood.