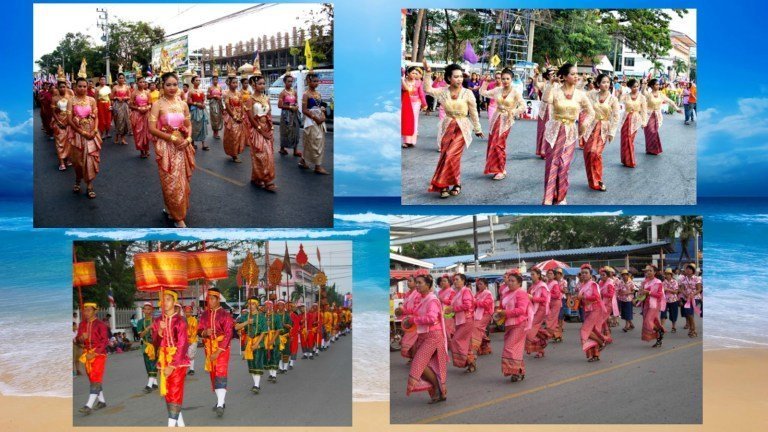 While the event name is quite a mouthful, this annual festival, (previously held over a number of days), is really two events in one; Khiri Travel Wonders III relates to the opportunity for visitors to explore the three bays, their islands and the surrounding mountains, that are the town’s crowning feature.

While the second is the traditional Thai Fair. Traditional Thai Fairs have been taking place for centuries within the Kingdom, normally within temple grounds giving the local people the chance to meet new and old friends and sell their produce.

The festivities include a grand opening ceremony, held at the town hall, (That’s what TAT would have you believe. but I’m afraid this is the boring part of most of the festivals in Thailand, as it is when local dignitaries will to often hog the microphone while the public shuffle about waiting for the fun to start). This is followed by colourful parade, featuring the many different people of all eight districts of the province, attired in traditional clothes and accompanied by numerous musicians.

The day is jammed packed with cultural performances, and shows detailing the history of the province and its many different people. The traditional fair brings with it noise and fun in equal parts and of course there will be a host of vendors selling all manner of local produce and handicrafts.

For those that want to stretch their legs there is also mini marathon, up to the top of Chong Krachok Hill and Wat Thamikaran, sometimes known as Wat Khao Chong Krachok, plus a beauty pageant for those who just want to feast their eyes. The evening comes alive once more when dancers again take the stage, in a colourful light and sound show.

More on the Province and the Prachuap Bay

Prachuap Khiri Khan is where Thailand tapers to its narrowest, where only 11 km separates Burma to the west and the Gulf of Thailand to the east. The province, whose name translates to ‘land of many mountains’, boasts a number of sandy beaches and national parks along with a couple of interesting Thai towns.

Ao Prachuap (Prachuap Bay) is a gracefully curving bay outlined by an oceanfront esplanade and bordered by enormous limestone outcrops to the north and south.  Unlike its much more visited northern neighbour of Hua Hin, (some 93 kms away), Prachuap Khiri Khan, is often sidelined by foreign visitors which is a great shame.

In the cool hours of the morning and evening, the esplanade becomes the focal point for both visitors and locals who take full advantage of the magnificent scenery while enjoying the ocean breezes and the calming sounds of the ocean. On Friday and Saturday evenings, the esplanade hosts a Walking Street market, selling food, souvenirs and clothes.