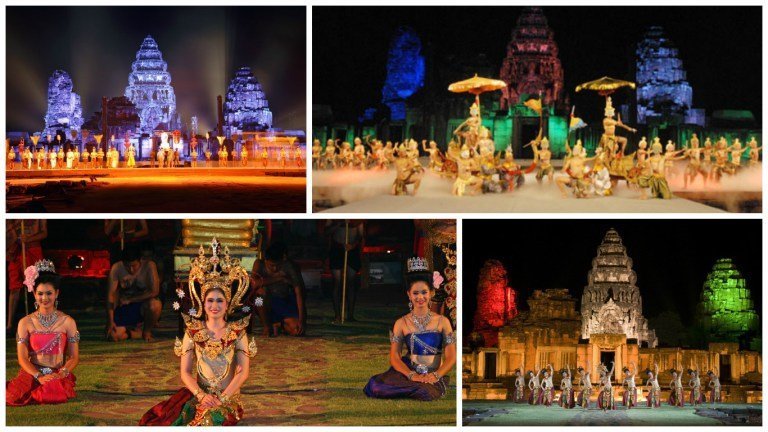 On a few nights of each year, in this north eastern province, within the ancient confines of this once magnificent Khmer temple, the past once more comes alive with a lavish sound and light show.

Situated in the Phimai Historical Park, these regular events are not on the scale of the major Phimai Festival  held in the same location each year in November, which is in three distinct parts: The Brahmathat Court Light & Sound Show, Long-Boat Racing and the Korat Cat Competition.

That is not to say these smaller festivals do not possess a charm of their own, those who are fortunate enough to be part of these events are individually welcomed, by local people with a traditional Bai Si ceremony, this is where each guest is greeted by, the trying of string around their right wrist.

From this quaint and ancient phi ritual, visitors can explore in their own time, all that the park has to offer, or you can hire a local guide to explain more of the former importance of the temple and its ancient history. The Temple grounds also hosts a number of stalls and areas, where you can tantalize your remaining senses with numerous food demonstrations and cultural performances, featuring the local diversity of the many different tribes that make up, the Kingdom’s largest province by area

The day is brought to a climax as the sunsets and the temple is bathed in many different coloured lights, it is now the turn of a host of dancer attired in traditional clothing to join the scene, accompanied by music and songs, to depict the long and at times turbulent past of these once important relics of a lost kingdom.

Events like this are held in a number of provinces across the Kingdom to highlight each locations unique culture and history. The biggest are those held at the Ancient City of Sukhothai. Sukhothai Province, during Songkran and the normal smaller monthly events held sometime between March – September each year.

For more on Festivals across Thailand for each month click on any of the Following: January…February…March…April…May…June…July…August…