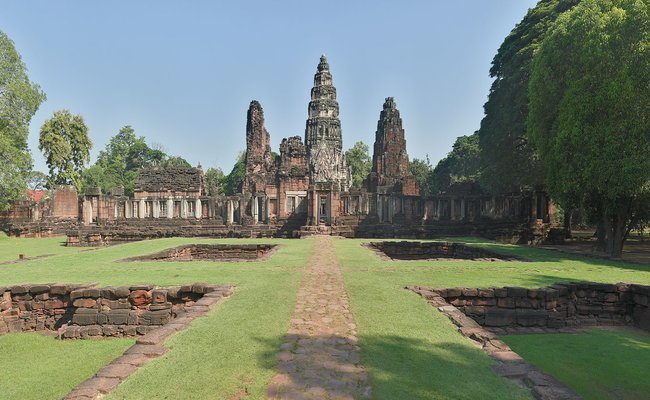 Thailand Festivals Phimai.This is Khorat’s time to shine with this festival to celebrate the glorious period of Phimai, and the significant role the town played in the very long colourful history of the region.

The festival is split into three distinct parts:

The nightly Light and Sound presentation at Brahmathat Court, at the Phimai Historical Park tells the story of the glorious period of King Jayavarman VI, in both song and dance including the Khon or classical Thai mask dance, the ancient boxing dance, Rueam Chap Krap and Rueam Santrut dances along with the Phimai Pura dance. Show start from 19.30 – 21.00 hrs.

The Phimai historical park (Thai: ปราสาทหินพิมาย) protects one of the most important Khmer temples of Thailand. The temple marks one end of the Ancient Khmer Highway from Angkor. As the enclosed area of 1020 x 580m is comparable with that of Angkor Wat, Phimai must have been an important city in the Khmer empire. Most buildings are from the late 11th to the late 12th century, built in the Baphuon, Bayon and Angkor Wat style. However, even though the Khmer at that time were Hindu, the temple was built as a Buddhist temple, as Buddhism in the Khorat area dated back to the 7th century. Inscriptions name the site Vimayapura (which means city of Vimaya), which developed into the Thai name Phimai. (Extract taken from Wikipedia)

Traditional long-boat competitions fought out on the Chakkarat Stream, (the word stream does not do justice to the stretch of water which is widely considered one of the best venues for long-boat races in the kingdom)

Long Boat-Racing is one of Thailand’s oldest traditions and the events have been arranged continuously since the Ayutthaya time (approx. 600 years ago) When they were used to enhance the physical and mental strength of the men folk, as the country was almost continuously at war with its neighbouring countries of Burma Lao and Cambodia.

There are 3 categories of races from the formidable 55 man crews, to the smaller but equally impressive 30 oarsmen down to the nippy 12 crew mini boats. For more on Longboat races in Thailand click here

While this part of the festivities maybe boring to some and while it cannot compete with the noise and grace of the other main events, it is eagerly awaited by the people of the province who have the chance to show off this ancient local breed.

The Korat is a natural breed, and one of the oldest stable cat breeds in the world. Originating from Thailand, it is named after the Nakhon Ratchasima province (typically called “Korat” by the Thai people). In Thailand the breed is known as Si-Sawat, meaning “colour of the sawat seed”. They are known colloquially as the “good luck cat” and are given in pairs to newlyweds or to people who are highly esteemed, for good luck. Until recently, Korats were not sold, but only given as gifts. (Extract taken from Wikipedia)

In addition to the main events there will be exhibitions on Phimai history, Thai puppet shows, a traditional arts and crafts fair, Phimai Contest – a youth country music singing competition, daily modern music concerts, plus a range of other cultural performances to celebrate the regions ancient and at times bloody history.