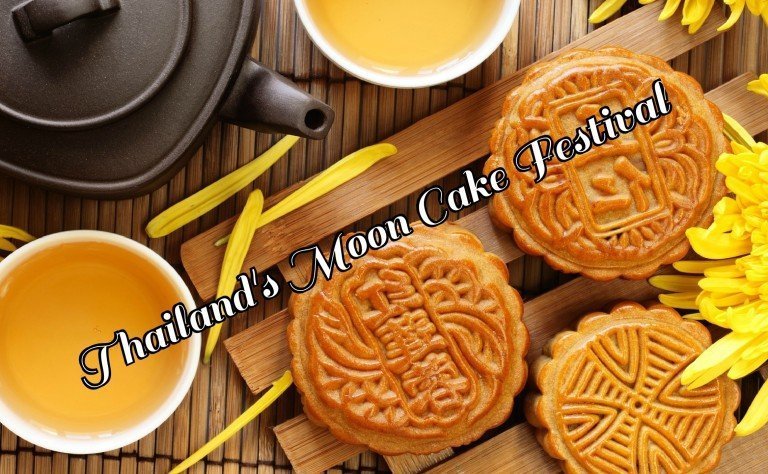 Thailand Festivals Mooncake Festival. No this is not the wild and alcohol fueled ‘Full Moon Parties’ found on Koh Phangan but an ancient and spiritual festival held across Asia to celebrate the end of the harvest.

While the Moon Festival – Moon Cake Festival originates from China the event is celebrated through-out Thailand’s Chinese communities.The Festival also known as the Mid-Autumn Festival, takes place at the full moon of the eighth month in the Chinese Lunar Calendar. It is when the moon is said to be at its fullest and roundest – the so-called harvest moon and marks the end of the harvest period when family and friends gather to celebrate a time of plenty.

The ancient Chinese believed in rejuvenation being associated with the moon and water.

According to traditional Chinese legend, a beautiful girl named Chang E worked in the Jade Emperor’s palace in the kingdom of heaven, an idyllic place where people lived and worked amongst the immortals. One day Chang E angered the Jade Emperor (not known for forgiveness) when she accidentally broke a porcelain jar, and in his anger he banished her to Earth.

Once there, she was transformed into a member of a poor farming family. As she approached her teenage years, her beauty flourished. Admiring her beauty from afar, a hunter discovered Chang E viewing herself in the reflection of a pond. The two soon became lovers.

Sometime later, ten suns rose into the sky rather than one, casting an intense heat across the land. The hunter stepped forward and shot an arrow into the sky, successfully sinking the nine extra suns. Instantly becoming a hero and source of great admiration, with this new found fame the two were married. The two should have lived happily ever after, but unfortunately the hunter grew into a tyrant, ruling with a cruel and oppressive hand.

He sought great power and ordered that an elixir be created in order to extend his own life. Chang E came upon it and unknowingly consumed the elixir, enraging her husband. Attempting to flee him, she jumped from the window of her palace bedroom, yet rather than falling, she simply floated through the sky towards the glowing moon.

It is said that by staring at the moon during the festival you can glimpse the dazzling Chang E as she dances and resides in its light.

Moon cakes are eaten at this time and hence why the festival is also known as the Moon Cake Festival, the cakes are traditionally round in shape and quite small with a thin crust wrapping a sweet and oily filling. Within the center of the pastry are nestled salted egg yolks, representing the shape of the moon. Though this may sound unappetising the salty flavour of the egg yolk manages to compliment the sweet outer pastry. Traditional mooncakes have an imprint on the top of the crust, which can signify the name of the bakery, the Chinese characters for ‘harmony,’ or identifying the flavour.

Modern day Moon Cakes now come in all different shapes and fillings, from coffee and peanut butter to prune and sweet potato. If you do nothing else this day look for a Chinese bakery and try a cake for yourself and if you get the chance, do look to the heavens and the moon and remember the beauty of  Chang E.