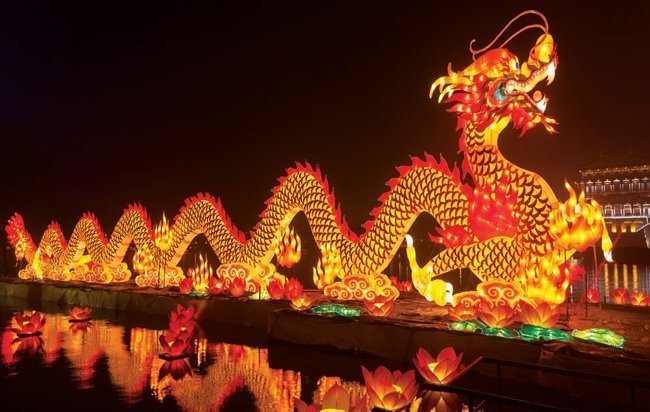 Not to be confused with the lantern festival in Northern Thailand, this festival has its roots in ancient China and is part of the Chinese New Year celebrations

Thailand Festivals Lantern Festival Northern Thailand. This traditionally Chinese festival is held annually on the 15th day of 1st lunar month, which coincides with the last day of Chinese New Year, it is on this day if you are lucky you will witness lantern parades and lion dances. On the same day it is also traditional to eat ‘Yuanxiao’ (a rice ball stuffed with different fillings) and so it is also called the Yuan Xiao Festival.

With a history that spans over 2,000 years, there are a number of legends that have sprung up to explain the festival my favorite is regarding the Jade Emperor and the fake destruction of a village.

According to legend, the festival was initiated when a beautiful bird escaped from heaven and flew down to earth, where it was hunted by some village people. When the Jade Emperor learned of this, he became very anger and on the 15th lunar day ordered his troops to destroy the village with a storm of fire. However, when the daughter of Jade Emperor heard of this imminent act of vengeance, she warned the villagers.

A wise man who happened to pass by the village made the suggestion that on that day everyone should hang red lanterns around their houses, setup campfire on the streets, explode bamboo firecrackers and home-made fireworks, in order to make the Jade Emperor believe that the village was under fire. When the heavenly troops indeed reported this back to the Jade Emperor, the village was saved and from that day on, people on the 15th lunar day annually celebrate the anniversary of this event by carrying red lanterns on the streets and exploding firecracker and fireworks.

There are a number of other activities and customs that are found on the day and they include admiring the colorful lanterns, watching fireworks, guessing lantern riddles, folk dancers; including the Lion dance and walking on stilts.

Starting in the Song Dynasty (960 – 1279), guessing riddles is regarded as an integral part of the Lantern Festival. People write all kinds of riddles on pieces of paper, and paste them on colorful lanterns to let other guess their meaning. Gifts are presented to the people who get the right answers.

Derived from the Three Kingdoms Period (220-280), the lion dance is sometimes mistakenly referred to as dragon dance, but in the Lion dance the animal is only operated by two people who mimic the movements of a Lion, unlike the dragon dance which has many more performers and mimic the actions of dragon.

While China has two performing types of the Lion Dance; In Northern lion dance focuses on skills, and in the south the lion dance pays more attention to the animal resemblance. Here in Thailand you will almost always see the Southern Lion

The Chinese Southern Lion dance originated from Guangdong and the Lion has a single horn, the animal is associated with the legend of a mythical monster called Nian. The lion consists of a head which is traditionally constructed using papier-mâché over a bamboo frame, and a body made of durable layered cloth trimmed with fur.

Most modern lion dance performers wear a set a set of matching pants, however some practitioners use black kung fu pants to appear more traditional.

According to ancient custom, the lion is a symbol of boldness and strength that can protect people, so by performing the lion dance, everyone prays for an auspicious and happy life.

Walking on stilts is another folk art which can trace its origins to the Spring and Autumn period (770BC – 476BC). Performers not only walk on stilts, but also do some breathtakingly difficult moves, dressed as different characters such as monks, clowns, and fishermen; this is a far more humorous side of the festivities unlike the Lion dance which is more spiritual in nature

Yuanxiao, also called tangyuan, is a dumpling ball made of sticky rice flour stuffed with different fillings. Over the centuries eating Yuanxiao has become an essential part of the festival. The methods for making Yuanxiao differ by region and fillings include sugar, rose petals, sesame, sweetened bean paste, and jujube paste (A sweet paste made from the ripe fruits of the jujube (date) plant. It is dark red in color and found in moon cakes). Some do not have fillings. Tangyuan can be boiled, fried or steamed; each has a unique taste and is very popular. Yuanxiao is round in shape so it is believed to be endowed with the meaning of reunion, harmony and happiness. During the night of the festival, family members sit together to taste Yuanxiao and appreciate the full moon.

And there you have it, an ancient Chinese festival that can be found through-out the Kingdom of Thailand, where ever you find a large Chinese community.