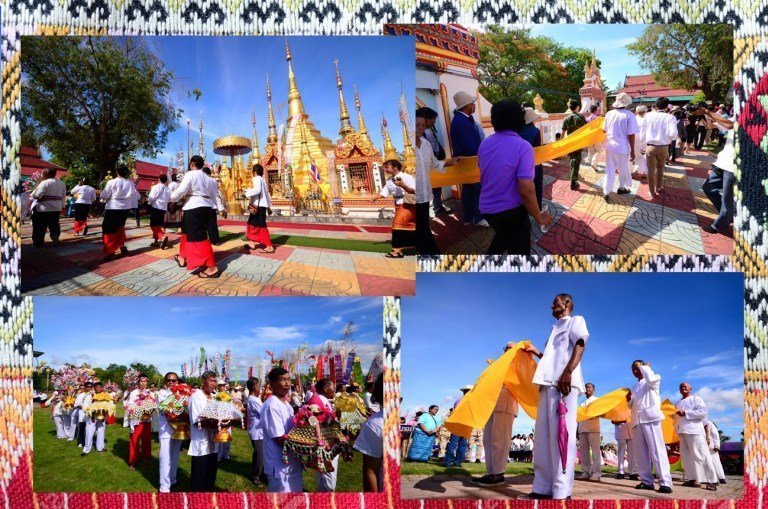 When: Annually May – June

Each year in this quiet northerly outpost and former independent Kingdom, a warm hearted and colourful, merit making event takes place,  to worship the Lord Buddha’s relics, that have for centuries been kept safe in local temples.

While not on the same lavish scale as other parts of the Kingdom, this sleepy part of Northwest Thailand holds a number of captivating processions during the few days of the event, including a colourful and very loud long drums band, accompanied by beautifully decorated money trees, ‘Pha Pa’ robe trees and victory flags, all carried by local people dressed in traditional Lanna clothing.

Most importantly is the procession bearing the robe that will later cover the Chedi, locally known as the royal pagoda or Chedi Yutta Hatthi, located next to Wat Phra Boromthat. It is here where the relics including bone and hair of the Buddha are enshrined.

Most of the processions start from Nong Lem, Saphan Bun, finishing at Wat Phra Borommathat, the wat is said to be a replica of the more famous and lavish Shwedagon Pagoda in Myanmar, known as the Great Dragon pagoda.

The wat is the former site of the Ancient Tak City, lying along the bank of Maenam Ping, approximately 25 kilometers north of the City, the site contains several ruins including the legendary hill-top pagoda in Phum Khao Binth style (of Sukhothai era).

Built by King Ram Khamhaeng (พ่อขุนรามคำแหง) 1237/1247 – 1298, who was the third king of the Phra Ruang dynasty, ruling the Sukhothai Kingdom (a forerunner of the modern kingdom of Thailand) from 1279–1298, during its most prosperous era.

King Ramkhamhaeng the Great is credited with the creation of the Thai alphabet and the firm establishment of Theravada Buddhism as the state religion of the kingdom. The wat is said to have been built to honour his successful elephant-back, hand to hand duel, against King Khun Sam Chon, the ruler of Muang Chot (currently Amphoe Mae Sot).