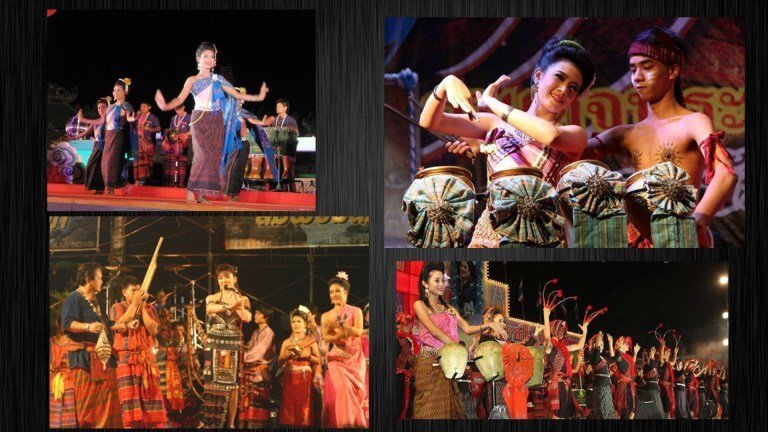 Thailand festivals Kalasin Pong Lang, Phrae Wa and Red Cross Fair. An event to keep alive the cultural heritage of this unique part of the Kingdom

While this annual festival (Thai:งานมหกรรมโปงลาง แพรวา และกาชาด จังหวัดกาฬสินธุ์) is organized around this same time each year, 2017 is slightly different as the event follows on the heels of another annual event that of the Silk and Phuk Seow Festival, (17-28th Feb), which was postponed from November 2016 due the demise of our late King.

The event will feature a number of colourful parades, featuring floats from each of its 18 districts of the province, with each in turn decorated with all manner of musical instruments, beautiful flowers and strange, mystical animals. Surrounded by a sea of people dressed in their traditional clothing, accompanied by a mass of musicians, belting out traditional Isan music.

That’s not all, there are also a number of cultural competitions, a beauty pageant. A Pong Lang bands’ contest, the pong lang is a log xylophone, which has 12-15 wooden bars that are tied together with a length of rope, the instrument is generally played by two players, who each use two hardwood sticks. The lower pitch end is attached to a post or tree and other is hooked to the player’s toe. The two performers sit on either side, one playing the melody, the other playing drone accompaniment.
The music does not stop there it continues with live music and entertainment shows, including North-Eastern style Mo Lam singers. All this blaze of colour and music is itself accompanied by a whole host of demonstrations and sales featuring local handicrafts and food products.

Plus there is the Phrae Wa Silk exhibition, which features displays and information on the nearby BAN PHON PHRAE WA SILK WEAVING GROUP, a village community supported by HM Queen Sirikit, renowned for its beautiful hand-woven silks, which are unique to the northeastern Phu Thai minority. The fabrics are made of Mat Mi silk, and boast exemplary workmanship. There are two main patterns: Lai Lak (principal pattern) and Lai Thaep (stripes).

While families are generally poor in this essentially rural area and derive most of their income from farming, supplemented by producing baskets and the silk for which the region is renowned. The reception you can expect from the local people is nothing more than heart-warming, with the event itself, sure to leave you wanting more of this northeastern corner of the Kingdom