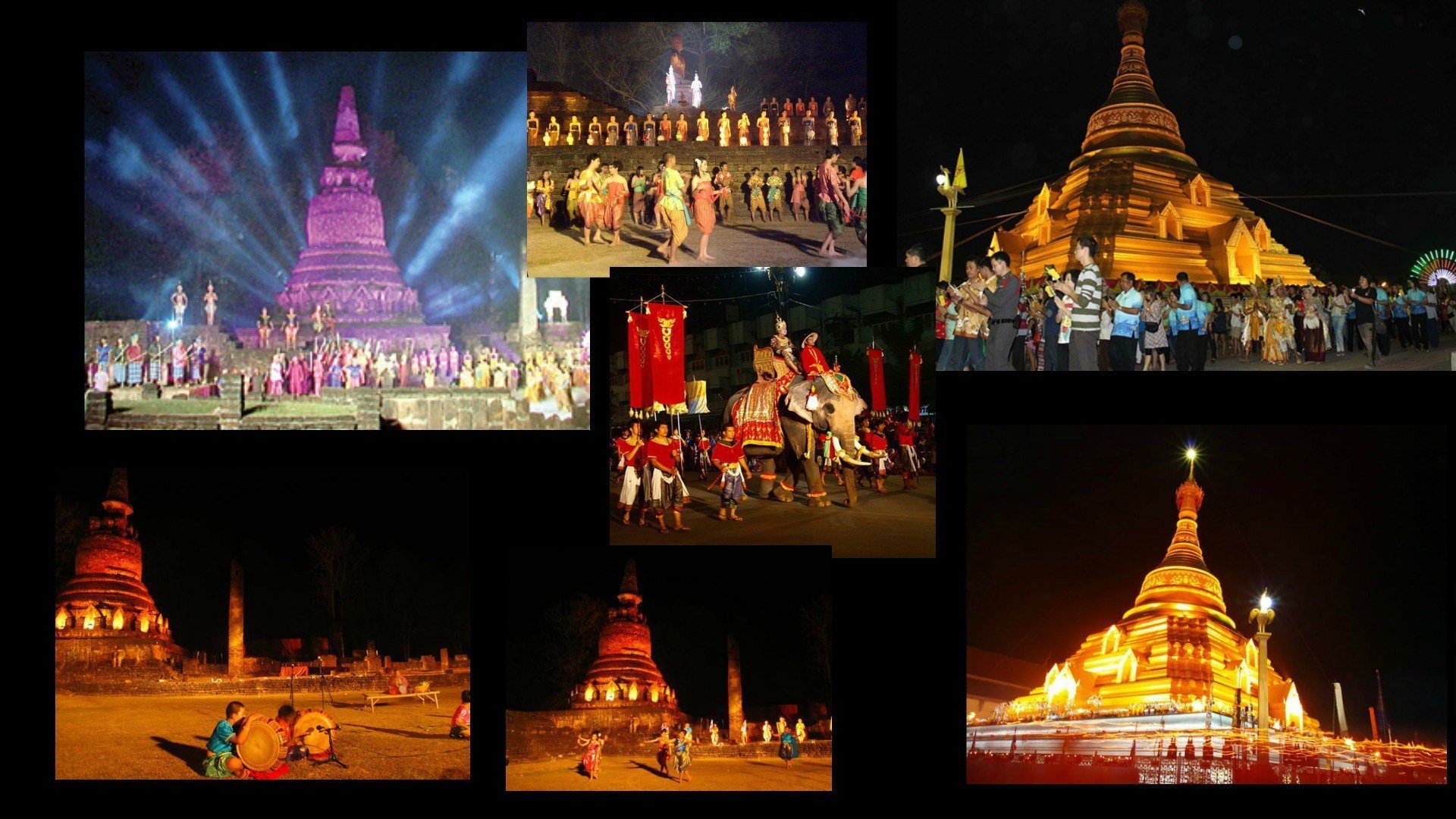 Thailand Festivals February 2017. This event is etched in stone and has been for centuries the local peoples chance to thank both the soles of those that have long ago passed, and for the spirits of today that still protect them

When: Annually during the celebrations of Makha Bucha (11th February 2017).

The Ancient Nop Phra Len Phleng Fair  (งานนบพระเล่นเพลง), is an ancient tradition dating back to the times of Sukhothai Kingdom (1238-1438), details of earlier festival were found on the inscription stone found at nearby Nakhon Chu. These markings display how processions were previously organized, to pay homage to the town’s major religious sites.

The fair today, consists of a number of colorfully decorated parades, where the many participants dress in elaborate, ancient attire, crossing the Ping River to pay homage to the Holy Relic on the opposite bank of Nakhon Chum.

The fair is also a time for Kamphaeng Phet Park, to celebrate its 1991 UNESCO designation, as a World Heritage Site. With parades, historical exhibitions, cultural and artistic demonstrations, cultural performances, numerous forms of popular entertainment and a spectacular light & sound presentations, played out among its historic ruins.

More on the Park

Thai ancient chronicles state that in 1004 a city called Nakhon Chum was constructed on the west bank of the Ping River, Kamphaeng Phet was to be constructed later on the opposite east bank,. By the 14th century Kamphaeng Phet had outgrown its older neighbour and was a major city of the Sukhothai Kingdom.

Protection from the Burmese

The city was an outer Wang or fortification, as was the northern city of Si Satchanalai, built to protect the inner capital city of Sukhothai, from Burmese invasion. Today there is still evidence, it was surrounded by city walls, shaped as a trapezoid, approx. 2.2. kilometres long, 300–700 metres wide. It had the same town planning concept as the older ancient cities of Sukhothai and Si Satchanalai.

The once impressive walls are made of local dark red laterite, stone and a decorative coating of stucco, which in turn is surrounded by a moat. (While religious sites on the west bank of the Ping River at Nakhon Chum are built of bricks and of smaller size).

The city once contained stone and timber; houses, barracks, palaces and temples and was a significant medieval city, perhaps protecting as many as 50,000 people. The once thriving city is now an outdoor museum (historical park) set among magnificent trees and lush greenery, it also now houses the Kamphaeng Phet National Museum.

The Museum exhibits artifacts found during excavations, around several sites in Kamphaeng Phet. These include ceramic wares, Buddha images from several era’s, as well as items excavated in several sites across the province, that date back to prehistoric times. One of its most interesting items, is an early 16th century bronze statue of Shiva, measuring 2.10 meters high that was originally kept in the nearby Shiva shrine. An inscription on the base, states the image was made by order of the Kamphaeng Phet King, in 1510 to protect the town’s inhabitants.

The Kamphaeng Phet National Museum is located near the Wat Phra That temple within the old city walls of the central area. The museum opens Wednesday through Sunday, from 9 am until 4 pm. Admission is 100 Thai Baht.

The historical park opens daily from 8 am until 5 pm. The visitor center opens from 8.30 am until 4.30 pm. The central area and Aranyik area charge a separate admission fee of 100 Thai Baht each, plus 10 Baht for a bicycle or 50 Baht for a car.

This site may contain copyrighted material the use of which has not always been authorized by the copyright owner. Such material is made available in an effort to advance understanding of Thailand or topic discussed in the article. This constitutes ‘fair use’ of any such copyrighted material as provided for in section 107 of the US Copyright Law.

In accordance with Title 17 U.S.C. Section 107, the material on this site is distributed without profit. If you wish to use copyrighted material from this site for purposes of your own that go beyond ‘fair use’, you must obtain permission from the copyright owner. If you are the copyright owner and would like this content removed from asia-backpackers.com, please contact us.