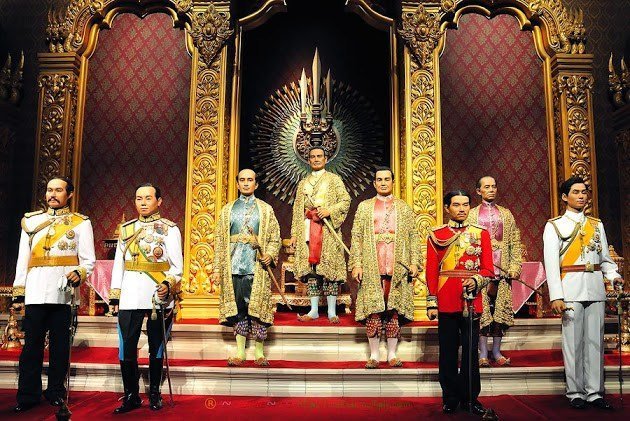 A time to reflect on Thailand’s long and colourful past

When: Annually on the 6th April

Chakri Memorial Day;  is a Public Holiday in Thailand and is held on the 6th of April each year (unless the 6th falls on a weekend, then the holiday falls on the immediate Monday). Government offices, schools, and banks will be closed, but most other businesses open as usual on this day.

King Rama I was born on 20th March 1737 coming to the throne on the 10th June 1782, his reign lasted for 29 years. One of King’s first acts was to make Bangkok the capital, by moving the original capital of Thon Buri to the opposite bank of the Chao Phya River. He did this for a number of reasons one of the most important, that being the defensive difficulties regarding the old capital, especially in light of the earlier sacking of the capital Ayutthaya by the Konbaung (Burmese) army in 1767, which resulted in the end of Kingdoms 400 year rule.

His foresight and actions proved to be correct, as the Burmese under the new King Bodawpaya (Padung) attacked  Thailand in 1785, with the biggest army then ever seen, said to be some 144,000 troops. There were to be several wars with Burma during Rama I’s reign, with his victories the fate of the Thai kingdom was secured and it has remained independent ever since.

Past and Present Kings

And so Chakri day commemorates both the coronation of Rama I and is also the day for the people of the Kingdom of Thailand to pay homage to all the previous 9 kings in the Chakri dynasty and the current and tenth King Maha Vajiralongkorn Bodindradebayavarangkun  (Rama X). At the age of 64, Vajiralongkorn is the oldest Thai monarch to ascend to the throne.

On the day the King, accompanied by other members of the royal household, will pay respects to the former Kings at the Royal Pantheon, which contains life-size statues of the first eight kings of the Chakri dynasty.

Bangkok is still known by the majority of Thai people as Krung Thep Maha Nakhon ( listen)) or just  Krung Thep which roughly translates to ‘City of Angels’. While Bangkok translates as ‘village of wild plums’. Bangkok was likely a colloquial name, albeit one widely adopted by foreign visitors, whose continued use of the name finally resulted in it being officially adopted with the creation of the Bangkok Metropolitan Administration.

What’s in a name?

The Guinness book of records shows the name as the longest place name in the world. It’s pronounced something on the lines of:

Many of the above words are archaic and no longer used in modern Thai. Still Thai school children are taught the full name, using a popular song to remember it; “Krung Thep Maha Nakhon” (1989)  (sample). The lyrics are just the name of the city repeated over and over. The full name actually translates to a string of superlatives and reads as follows:

The city of angels, the great city, the residence of the Emerald Buddha, the impregnable city (of Ayutthaya) of God Indra, the grand capital of the world endowed with nine precious gems, the happy city, abounding in an enormous Royal Palace that resembles the heavenly abode where reigns the reincarnated god, a city given by Indra and built by Vishnukarn.

While it is difficult for many Non-Thai people, to understand the deep reverence and love, the people of this Kingdom have for their former Kings, what you will see on this day is an out pouring of emotions, that sums up the nations desire to hold onto its rich and colourful history.