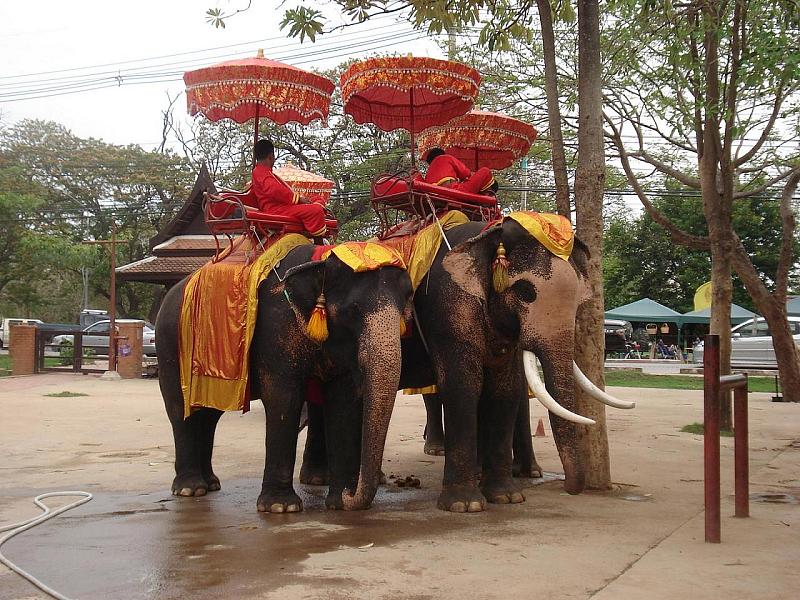 Thailand Elephants. Elephants have been a symbol of Thai culture for centuries. They were on one of the 1st national flags and are often seen in art, literature and national emblems.

Elephants are herbivores, consuming ripe bananas, leaves, bamboo, tree bark and other fruits. One of these wild beasts in a tropical forest can spend 18 hours a day, eating and looking for food. They can easily eat over 200 pounds a day. However, elephants only digest about 40%, which means the dung piles can get big. Quickly.

Elephants were banned from being used for logging in 1989 in Thailand. Problem was it threw many logging elephants out of work. Bananas don’t grow on trees so many owners/mahouts/elephants turned to tourism.

Elephants and mahouts use to roam the streets begging for food and money in Bangkok but that was outlawed in 2010, however it still occasionally happens. Today, most elephants have been placed in ecotourism camps in northern Thailand.

Elephants and mahouts have stopped by D&G Resort hoping for a donation as they head to the temple to celebrate a Thai holiday. The latest figures show that there are 2,700 domesticated elephants in Thailand and they are not cheap. Imagine paying $22,000 for a Hereford heifer. That is what it costs to buy an average young cow elephant.

Elephants still live in the wild in Thailand. Scientists believe that there are around 1,000 wild elephants roaming about. We never have had problems with these beasts but some Thais are killed from marauding elephants raiding farms.

Elephants are drinking out of a river when one spots a turtle asleep on a log. The elephant ambles over and kicks the unsuspecting turtle clear across the river.

“Why did you do that?” asks a passing giraffe.

“Because I recognized it as the same turtle that took a nip out of my trunk 47 years ago.”

“Wow, what a memory!” says the giraffe.

they mostly use their trunks

Elephant statues are popular worldwide. It is common superstition that an elephant carving should always face the door if you want to bring good luck into the house.

After much discussion, it was decided to place our wooden elephants so they would face the front gate.

Headed to the local temple.