Thailand Discovery Things to do in Roi Et

Thailand Discovery Things to do in Roi Et. This past week we traveled to Roi Et, Thailand, in the Northeast, to the Isaan region.  As usual the theme was going where my kids wanted to go, to see a space museum / planetarium and dinosaur museum and fossils.  Except for highway traffic road trips in Thailand are nice.
Related to tea, it was a good chance to extend past exploration of brewing grandpa style, the technique of using uncontrolled brewing time, just mixing leaves and water in a tea bottle and drinking that, then refilling.  I’ll say a little about the travel and get back to how that part went. tested on a lot of types.

Museums, and travel in Isaan, Thailand 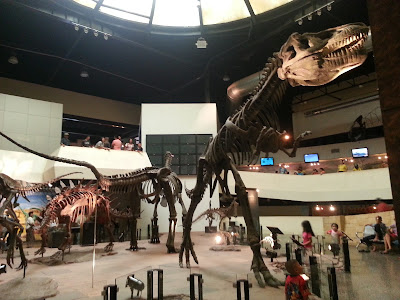 Thailand Discovery Things to do in Roi Et
Nothing here is going to be the Smithstonian but both museums were great.  A late start nearly cost us the space museum part because they were only open on Saturday, the day we started, and we didn’t leave at 3 AM as planned.
It takes 9 hours to cross that stretch of 500+ kilometers (350+ miles), so we were one hour away from missing that museum altogether.  It really should have been a 10 hour drive; I cut it short by taking a road-rally approach to driving.  Maybe that late start was for the best given how the travel pace worked out as it was.  One might think planetariums would be a rarity in “developing countries” but apparently not; based on internet research finding background on that one we drove by a few of them to get there. 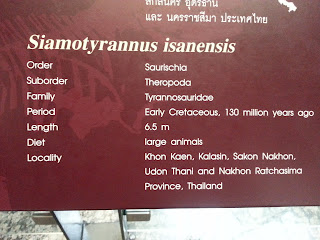 Thailand Discovery Things to do in Roi Et
I hadn’t realized there was a Thai Tyranosaurus, that they had that covered too.  The most interesting part of that museum was learning about the natural history of primitive people living in Thailand.   I knew people had lived in Thailand since the stone age but apparently earlier hominids were here well before humanity evolved, at least a half a million years ago.
It’s funny seeing people post online about how evolution couldn’t be an accurate model because there would be fossils of early hominids if it were, when lots of those fossils are out for display in museums, as I just saw.  But then I guess it’s easy to reject any and all of science when you just visit web pages that are into that project.
Thailand Discovery Things to do in Roi Et
As for contacts, those places aren’t as easy to look up online as one might expect (Trip Advisor had never heard of either, which I’m working on fixing), but here is a link for the dinosaur museum (the address and a number, at least, not their web page), and for the planetarium / space museum this is their Facebook page and web page.
All the driving was fueled by lots of tea, the next subject.  Driving in Thailand is a little crazy to begin with.  It’s not so bad if you don’t mind getting places very slowly, but since they don’t use dedicated slow lanes and passing lanes it’s a free-for-all if you want to drive at normal highway speeds.  At one point I told my wife that if I’d been trying one passing move in a video game instead we’d have made it, but since I was gambling with our lives I needed to keep it all in proper perspective.

As far as I know the Tea Addict’s Journal blog popularized this expression,  based on a common Chinese brewing practice,  perhaps the most common form of tea brewing used in China.  There is a later post in that blog on the author doing more of it recently, with a follow up in the next post after that one.
If you walk around places like the Forbidden City in Beijing many people are carrying inexpensive plastic bottles full of wet leaves, or tea mixed with hot water.  Hot water for tea is available all over; even on trains there is a spout offering it, like a different take on a drinking fountain.  If they’re drinking the most common forms of tea one sees sold they’re brewing green teas, mostly Longjing style (typically sold as actual Longjing, but maybe some is and some isn’t), or lightly oxidized rolled oolong (Tie Kuan Yin, or the like).
The advantage to this brewing style is ease and portability; the disadvantage is lack of controlled brewing time.  I’ll be able to describe how that works out for different tea types since I just tried most.  Of course it doesn’t really have to be prepared in an inexpensive plastic bottle, and controlling infusion times would be possible based on use of specialized bottles designed to do that, which to me really wouldn’t really be a version of the same brewing approach.
A bit on the actual brewing:  I used two half liter thermoses so I could brew two quite large infusions, or three if I started with the tea bottle full.  Bathroom breaks were more of an issue than hot water refills, but when it did come up 711s and coffee shops were always great about handing over free hot water, without much in the way of giving strange looks.
Snacks might be another issue, since downing a liter of most tea types would require some food to offset the stomach impact, for most.  Potato chips seem to work fine for that; or most foods, really.  From experience only eating fruit with tea doesn’t work well for me; adding some pastry along with fruit is much better, and having only dairy with tea would seem odd.  But I tested drinking lots of tea while just eating ice cream and that’s fine. 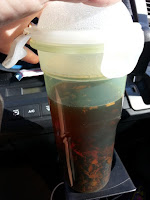 I drank this last trip, two months ago, more because I felt like black tea than because it was well suited for this approach.  A more astringent black tea would be horrible prepared this way, but this one is relatively soft as blacks go.  It works ok brewed light or a bit strong, which is how this goes.  It has an interesting character, some earthiness, wood or tobacco or something such, with a little dark cherry, and enough astringency to give it plenty of body.  It lacks that “briskness” that comes up in Assamica based teas, which I don’t think it is, but I didn’t go back and check that.
Since tea made this way is still too hot to drink for at least 5 minutes without a second cup to transfer it to one only experiences it brewed a bit strong, but of course proportion can counter this.  Oolongs work better since they will support even a few really long steeps, and work well at different brewed strengths.  To some extent one can adjust proportion of tea to water to counter using a 5 to 10 minute brewing time, but it’s not the same as balancing the factors in a normal way, so the end effect is different.  For some tea purists it might be a no-go, but for me it’s fine for a change.
Toba Wangi Wu Mei Indonesian oolong:
It’s kind of a waste to brew tea this good this way, since it really shines when you get the parameters right, but it works well across a range of approaches so I tried it.  It was nice;  good flavors, good at the range of strengths, good for a few long steep infusions.  Brewed-out like that it picks up more astringency, leaning towards green tea character, and the sweetness is subdued.  It was still fine as long as you didn’t mentally compare it to how good the tea could have been brewed the standard way.
Toba Wangi green tea:
Green teas usually don’t work as well brewed for a long time, or using boiling point water,  but this one was ok.  It’s not that hard to back off temperature if one has some room temp water to mix,  and it cuts the wait to cool the tea to a drinkable range.   Luckily this tea is a bit mild as green teas go, so was fine but just not optimum, really how the technique goes in general. 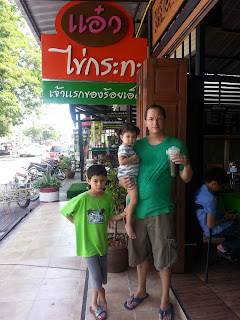 Notice a pattern?  I’m clearing the last of that set of teas, which I’d usually rather give away so that someone else could try them too.  Buds only white tea works really well for this style, although it helps if someone prefers the longer-brewed fuller-bodied white tea preparation style (versus lighter, which is also nice).  Even if you back off the proportion the flavor profile still changes to how the tea is when brewed longer, it’s just not so strong.  As a result the light, sweet, more floral tones were swapped out for mineral and light wood / sunflower seed range flavors (but still nice).  Silver needle style teas just won’t quit brewing too, good for a lot of very long infusions; the taste just keeps edging further in that flavor direction.

This tea is well suited for the brewing approach, it’s just not my favorite type, or in the top half of my favorite types.  But it is mild, and still mild if brewed strong, and the taste profile doesn’t shift much from something like dark toasted sesame no matter how you prepare it.
Finally at the end I tried the tea that worked the best, the one I had expected to.

Anxi  (Chinese) Tie Kuan Yin,  I think a sample from the Jip Eu shop in the Bangkok Chinatown:

Perfect for this brewing approach; a great tea for drinking brewed lightly or unusually strong, which steeps to make a lot of tea.  I think I again lost some subtlety and floral / vegetal tones to mineral from the longer brewing time, but it worked well.  Even across the unusual brewing format I think this was the most mineral intensive Chinese TKY I’ve tried, close enough to Taiwanese versions, so maybe I shouldn’t have been messing around with it using this approach.  This was the only time I cut the brewing process short to drink the tea on a set time frame, before it cooled on its own,  pouring in some cold water to replace normal air cooling so I could have it with ice cream at one stop.
Really someone could integrate that into their approach and deviate from true grandpa style brewing, or just bring a second cup to move the tea to after a standard three or four minute soak.  If minimalism was a goal the thermos would even work for that, for use as a separate cup, but it’s probably better to stick to just putting water in one, since no matter what the thermos inner lining is it’s going to pick up the taste.  The tea I had with breakfast in a hotel I would pour out to cups; on the road I switched back to just drinking it out of the bottle with leaves still floating in it.

There’s not much time or effort saved if someone is making tea at home, based on drinking tea grandpa style versus standard Western brewing,  but it works in a pinch.  Tea selection and sourcing is almost the key step since this isn’t ideal for really nice tea, which essentially deserves better, but then who drinks bad tea.  As for other tea types I think shou pu’er would work well made this way, inky and dark, made palatable or even pleasant by getting the proportion right.  Blends would work, teas mixed with other things, I just tend to not drink those.  I’ve been dabbling in Earl Grey more lately; that could be ok.  Or even tisanes, except that driving “on caffeine” seems to work well.
Thailand Discovery Things to do in Roi Et