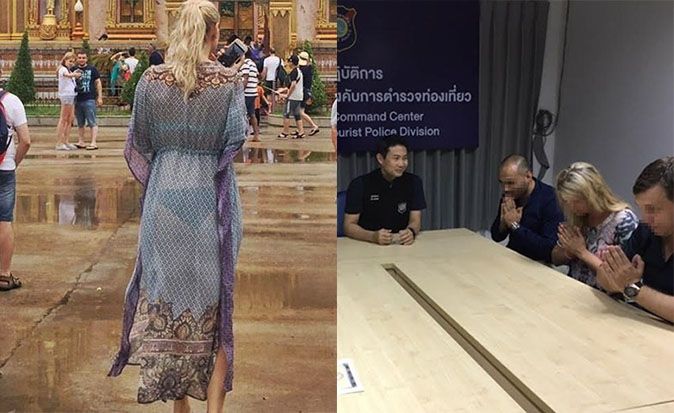 Hours after a blonde woman was photographed wearing a see-through dress while visiting a sacred temple in Phuket, she was invited to the police station to get a lesson on Thai culture last night.

The tourist, a Russian national, had to make a stop at Tourist Police Command Center with her tour guide and apologize for her actions after photos of her parading around Chalong Temple in a flimsy beach cover-up went viral and was criticized by furious Buddhists. 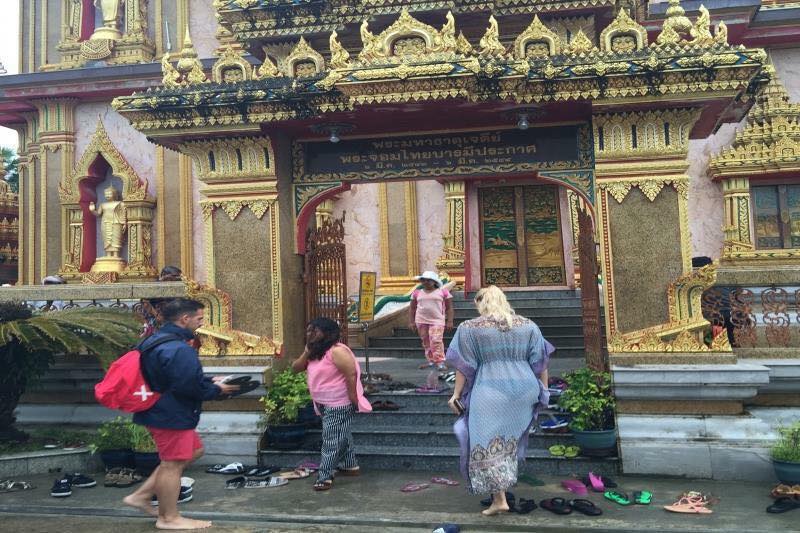 Wat Chalong is a popular attraction in Phuket where Buddhists go to pay respect to the Phra Chom Thai Baramee Prakat, a Buddha image brought from Sri Lanka.

The police gave the tourist a lesson on Thai culture and what not to wear when visiting a religious venue.

The woman said she understood and apologized to the Phuket locals, claiming she did not intend to disrespect the religious venue, Manager reported.

Like a typical police conference, at the end, the woman had a do a little wai for photos to show she really was sorry.

Thailand culture is deeply influenced by religion. With around 95% of the country being Theraveda Buddhist, the belief system and values of Buddhism play a huge role in day-to-day life. Throughout the country, the most important values that Thai people hold to are respect, self-control, and a non-confrontational attitude.

Thailand Values. Thai culture is deeply influenced by religion. With around 95% of the country being Theraveda Buddhist, the belief system and values of Buddhism play a huge role in day-to-day life. Throughout the country, the most important values that Thai people hold to are respect, self-control, and a non-confrontational attitude.  Losing face by showing anger or by telling a lie is a source of great shame for Thai people.

In general, displays of emotion in public are viewed in a very negative light.  No matter how frustrated or upset a person might feel, he or she will always strive to maintain a positive and friendly attitude, a sense of humor, and a smile.

Respect for elders and for those in higher social positions is also important. Hierarchies of social status characterize nearly every interaction. Children are expected to respect their parents and teachers. The young must show deference to the elderly.  Those with highly prestigious positions in society, such as doctors, important public figures, and monks are almost revered.

Family is central to Thai life.  Although many newly-married couples will set up their own households, it is not uncommon for extended family to live with them.  Often, grandparents, cousins, aunts, and uncles will all live in the same household and help to raise children and provide for the family. Children are expected to show great respect for their parents, and they maintain close ties, even well into adulthood.

Although Thailand’s family life and society has been traditionally male-dominated, women are granted considerable respect. Recent laws and legislation have allowed women more freedom to move out of traditional roles and into professions such as politics, medicine, and business. Respect and equal rights for women has, in recent decades, become an important part of Thailand’s law and values.

Another concept that is very important in Thai culture is sanuk.  Sanuk is a wide-reaching idea that embodies the playfulness and sense of humor that is so central to life in Thailand. It could refer to a spontaneous and joyful meeting with someone on the street, or a humorous pun made at just the right moment. The sense of humor and joie de vivre captured in sanuk is central to the Thai way of life.