Thailand Chiang Mai. There is a lot of talk of Thainess around these days with the Tourism Authority of Thailand (TAT) using the term to promote the charms of the kingdom and its people. But what exactly is Thainess? Well, it’s not something that can be summed up in Tom Yam Kung, temples and Songkran. After all, Thainess means different things to different people. Thailand is a highly-diverse nation – up to 70 ethnic groups live within its borders, many of whom have their own distinct languages and histories, vital ingredients in the kingdom’s rich cultural mix. And surely these people have as much right to celebrate their Thai home as anyone else

It’s the kingdom’s North that boasts the most ethnic diversity, as many  tribal groups have settled here over the centuries, moving down from China, Myanmar and Tibet to settle in the Thai valleys and hills. Perhaps the best known of these groups are the Karen, Hmong, Lahu and Akha. But one area of Chiang Mai is also home to a smaller group known as the Tai Kheun, a small tribal people whose origins lie in the Shan state of Myanmar

Unlike other tribal groups, the Tai Kheun didn’t gradually migrate into the area; they were brought in by King Kawila of Chiang Mai in 1796 as part of his efforts to repopulate the city and areas around Chiang Mai which had been left deserted after years of war with the Burmese. And, like many exiles, the Tai Kheun clung to their traditions as a way of preserving their cultural identity. Even today, the people proudly wear their traditional costume and speak in their own dialect.

The Tai Kheun people of Chiang Mai have opened up their community to visitors not only to tell their stories to outsiders, but also as a way of keeping their traditions and customs alive. So if you make a visit to the region and want to learn more about these fascinating people, the best place to start is the Tai Kheun Museum, which is housed at the lovely Wat San Kangpla. This tells you the story of the Tai Khuen in Thailand, starting from when they first lived in Chiang Tung, in what is now Myanmar. 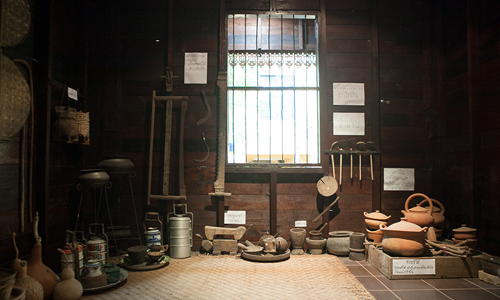 The Museum is a treasure trove of those everyday objects that give a real picture of the people’s lives. So you can see household items and tools used by the Tai Kheun and examples of their clothing. If you want a proper understanding of the history, it’s worth contacting the Museum in advance to arrange a guided tour led by one of the Tai Kheun villagers, who take it in turn to act as curators. They will be able to answer your questions about life in the community and tell the story of their rich history.

Sometimes one of the village elders will bestow a blessing on visitors by tying a sacred band around their wrists – a token that‘s believed to ward off bad luck.

The Museum is also a teaching centre for the local Ta Kheun youngsters, and they come here to study meditation and Buddhist teachings as well as to learn about their origins, so it’s an important place for the community. The Museum is free for visitors, but donations are welcome, or you can make your contribution at the Coffee Boon Shop, where monks prepare refreshments for guests – you simply pay the amount you like for your drink and all the proceeds go back to the community.

This is a living culture since the Ta Kheun people still carry out everyday tasks and jobs to make money and raise their families. So make sure you pay a visit to the San Kangpla Cultural Centre where you can see talented Tai Kheun weavers making their unique fabrics on looms. Many of the items they produce are sent to Bangkok to be sold at trade fairs, but visitors can buy scarves and shawls at the village. The Ta Kheun people also grow organic fruits, vegetables and herbs including basil, rosemary and tomatoes. Many of these are grown on site and cooked into tasty snacks that are sold in the local shop. The market farm is a sustainable environment project and just one way for the local community to find a new source of revenue.

There are plans in the future to open up a new cultural centre so more people can learn about the traditions of the Ta Khuen – this will ensure that they retain their distinct identity in the melting pot that is modern Thailand. So why not go along and learn their stories? You’ll explore the culture of a fascinating people and experience another aspect of Thainess in the northern hills.