Thailand Buddha Images Seven Days of the Week. Certain events in the Life of the Buddha are thought to have occurred on certain days. The Buddha Images representing these events, are thus also associated with the days on which they occurred.
People who are born on a certain day of the week, may be most interested in a Buddha Image corresponding to that day (like when commissioning a Buddha image).

Thailand Buddha Images
In Pensive Thought
The enlightened Buddha stands with hands crossed over his abdomen (right hand over the left).
The Buddha contemplates his achievement of complete knowledge under the Bodhi tree.
After enlightenment, the Buddha stood still for seven days under the Bodhi Tree to contemplate the suffering of all living things. He was tempted to enter Nirvana at once (By Mara), but he wants others to know the true doctrine, and resolves to communicate his doctrine to others.

Preventing Calamities (This Image is Similar as the Image for ‘Stopping the relatives from fighting’)
The city of Vesali was tormented by three evils : poverty, cholera and devils. Devils were roaming the city feasting on dead bodies and even people. The King of Vesali was advised to seek the help of the Buddha.
Accepting the invitation, the Buddha with company, arrived at Vesali. With his transcendental powers, he caused heavy rain to pour down, so heavy that it cleaned the city of all dead bodies and uncleanliness.
Later on, Ananda, his disciple went around the city, reciting portions of the Tipitika, and sprinkling lustral water around the city. Suffering humans were healed, while all devils were frightened and fled the city.

Reclining Buddha
Left arm along the body, right arm serves as a pillow with the hand supporting the head.
Story : The giant Asurindarahu wanted to see the Buddha, but was reluctant to bow before him. The Buddha, while lying down, presented himself as much larger than the giant. He then showed him the realm of heaven with heavenly figures all larger than the giant. After all this, Asurindarahu, the giant, was humbled, and made his obeisance to the Buddha before leaving.
Image at Phra Pathom Chedi, Nakhon Pathom province.

Holding an alms bowl
The Buddha is standing with both hands around an alms bowl
This symbolizes the first morning after visiting his father at Kapilavastu. In the morning the Buddha went out to receive alms in the city. 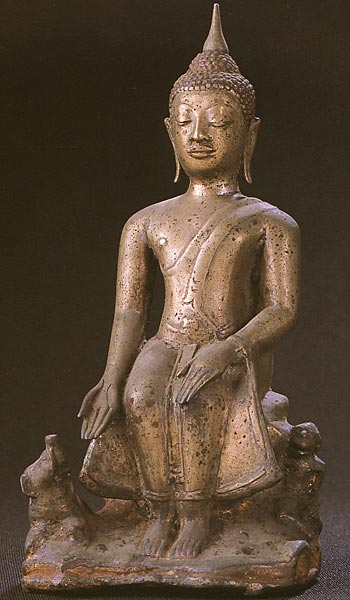 Retreat in the Forest
Buddha spent the rain retreat on his own in the Palilayaka (Palelai) forest because he was tired of the monks of Kosambi who had split into two groups and were not in harmony. While in the forest, the elephant Palilayaka attended to him, and monkey offered him a beehive. 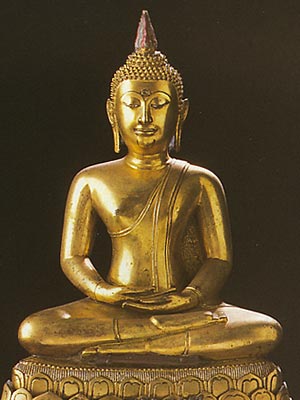 Meditating
Sitting in the yoga posture. Note the right leg on top of the left, the right hand on top of the left hand.
The Bodhisattva makes a vow and is determined not the leave the spot (where he is sitting on the grass) until he achieves enlightenment. The Boddhisattva determines to find the cause of suffering and its cessation.

In Reflection (Deeply Thinking)
Hands are crossed across the chest, right hand in front of the left.
The Buddha (at the Banyan tree), wonders how he can explain the cause of all suffering to others. 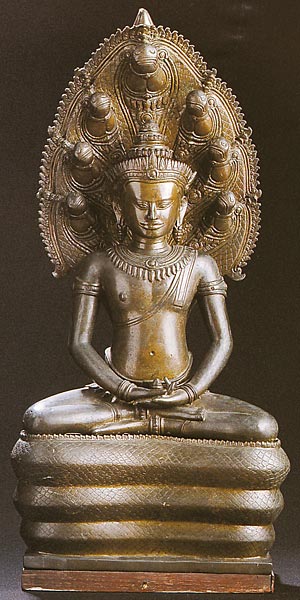 Sitting in meditation, protected by Mucalinda’s cobra hood. (Mucalinda is King of the Naga)