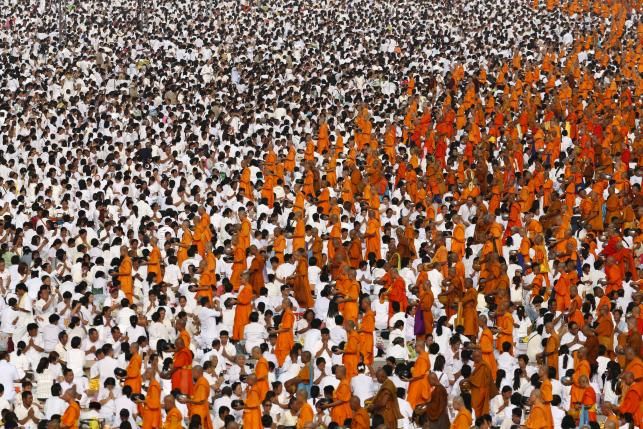 Tens of thousands of Buddhist monks gathered today at a Thai temple mired in controversy to join in a ceremony organizers called the world’s largest offering of alms to renunciates.

The temple, 49 km north of Bangkok, is run by the influential, if controversial, Dhammakaya sect, and has been dogged by allegations of corruption for years, but has always denied them.

Around 50,000 monks clad in orange robes chanted as devotees wearing white to symbolize the purity of the Buddha flocked to give alms at the Wat Phra Dhammakaya, famed for its enormous golden stupa that resembles an unidentified flying object.

“Giving alms to 100,000 monks is a once-in-a-lifetime event,” said one devotee, Patsara Limkangwanmongkol, 47, adding that she had made similar offerings at the temple for a decade.

As many as 100,000 monks and novices took part in the event, organizers said in a statement, calling it the largest of its kind.

The monastery’s abbot has been summoned on Monday by Justice Ministry officials dealing with cases that could affect national security to face charges of money-laundering and receiving illegal donations, among others.

The abbot, Phra Dhammachayo, has said he received charitable donations but did not know where they came from.