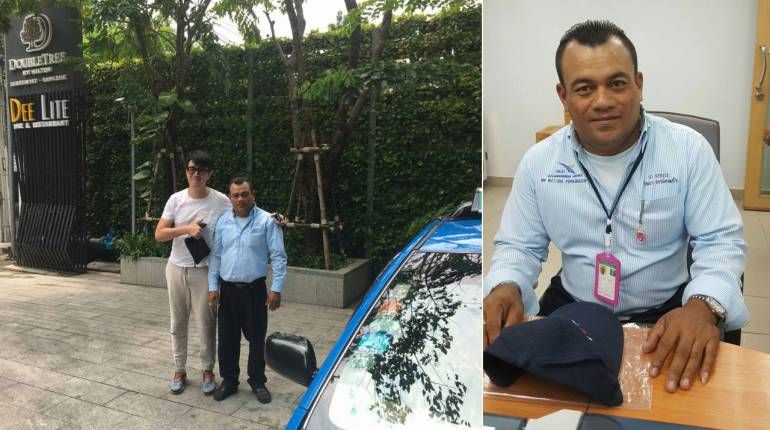 Thai taxi driver returns tourists money. After a Suvarnabhumi taxi driver conned two Swissmen out of a THB6,000 fare earlier this week, here is a story about an honest taxi driver that reminds us there are still some kind-hearted cabbies in Bangkok.

The passenger, identified as Huang Xuepeng, immediately hugged Wattana when he showed up at his hotel on Sukhumvit soi 26.

Wattana said he picked up the man from Suvarnabhumi International Airport, but Huang got out of the car before arriving at his hotel because of the traffic, which meant Wattana didn’t know where exactly he was staying.

When Wattana spotted Huang’s bag on the backseat of his car, he immediately contacted officials at Suvarnabhumi Airport to help him track down the passenger. Fortunately Huang had also been in touch with staff at the airport, who arranged a meeting between the tourist and taxi driver.

Huang promised he would tell people in Hong Kong how honest Thai taxi drivers are.

Wattana received a certificate and some souvenirs from Suvarnabhumi Airport as a reward for his honesty, Thairath reported.

Besides the BTS and MRT, the easiest and most convenient way to get around Bangkok is by taxi. Most taxis are new, spacious and, in addition to the traditional green-yellow and red-blue, they also come in funky colours like bright orange, red and even pink. Finding a taxi is not a hassle, especially around hotels, shopping malls and other tourist attractions.

However, you’re in for a really long wait when it rains, and during rush hours. The fare starts at 35 baht, and stays there for the first two kilometres. Thereafter, the fare gradually works its way up with 2 baht at a time (roughly per kilometre). A surcharge applies in traffic jams (1.25 baht per metre when moving under 6 km per hour). Typical taxi fares for going a few kilometres are around 50 baht. Communication can be a problem with the majority of Bangkok’s taxi drivers as they often speak little English. Improvise, and be imaginative.

Overall, there’s never a shortage of taxis in a city that never sleeps, excepts when it starts raining of course. They’re cheap and available virtually 24 hours a day. Meter taxis now predominate, but sometimes you may have to politely (but firmly) ask them to switch the meter on to save negotiating later. Since taxis are cheap and the drivers work all hours in traffic that is legendary, a small tip is often appreciated.