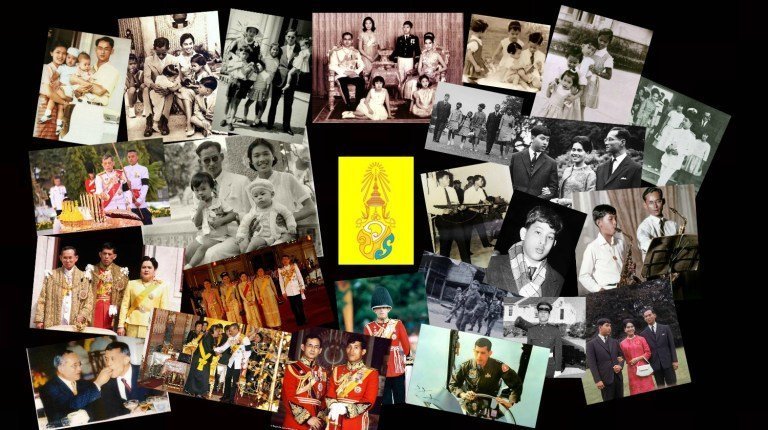 Thai King. From Birth to King with The New Royal Flag at its Center

King Maha Vajiralongkorn Bodindradebayavarangkun: มหาวชิราลงกรณ บดินทรเทพยวรางกูร) was born 28th July 1952, in the Amphorn Sathan Residential Hall of the Dusit Palace in Bangkok. He is the only son of King Bhumibol Adulyadej and Queen Sirikit’s four children. Like his father he was born on a Monday and so in keeping with traditions his lucky colour is yellow seen in his Royal flag. (See our post Colourful days in Thailand).

From 28th of July 2017 and each year thereafter, the nation will celebrate King’s Day, with a National Holiday. The 5th December will continue to remain Fathers day, in celebration of the late King’s birthday see our post: His late Majesty King Bhumibol Adulyadej Birthday

He spent his early years being educated at the Dusit Palace in Bangkok, later being sent to the United Kingdom where he completed his secondary education in July 1970. In August the same year, he attended a five-week military training course at The King’s School, in Sydney, Australia.

Two years later in 1972, the prince enrolled at the Royal Military College, Duntroon in Canberra, Australia. His time was divided into two parts, military training by the Australian Army and a bachelor’s degree course under the auspices of the University of New South Wales. He graduated in 1976 as a newly commissioned lieutenant, along with a liberal arts degree. Some years later in 1982 he completed a second bachelor’s degree in law with second-class honors at Sukhothai Thammathirat Open University.

The then Prince would later undertake further military training within Thailand and both British and United States armed forces, where he qualified as a helicopter and aircraft pilot.

From Man to Prince

When just 20, his late father His Majesty King Bhumibol Adulyadej conferred Prince Vajira­longkorn with the title of “Somdech Phra Boroma Orasadhiraj Chao Fah Maha Vajiralongkorn Sayam Makutrajakuman” (His Royal Highness Crown Prince Maha Vajiralongkorn – only the third Crown Prince of the Chakri Dynasty), making him the heir to the throne in accordance with the Palace Law on Succession B.E. 2467 (1924).

The Crown Prince on the same day took a sacred oath, at the Temple of the Emerald Buddha, vowing to perform his royal duties for the sake of the nation and the betterment of the Thai people.

Buddhism and the Thai Monarchy

As is traditional for Thai males, including the royal household, in November 1978 at the age of 26, the prince was ordained at Wat Phra Sri Rattana Satsadaram, as a monk. He would then spend the next 15 days exactly as, former Kings and princes had done for centuries before him, (including his own father in 1956), at Wat Bowonniwet Vihara, learning more of Theravada Buddhism.

Patronages and helping his subjects is not new

Like his father before him, and while still the Crown Prince he had numerous patronages, dealing in the well being of his later subjects. Including the 21 ‘Somdet Phrayuparaj’ hospitals situated around the Kingdom, plus “His Royal Highness Crown Prince Maha Vajiralongkorn’s Scholarship,” with its aim of improving children’s access to quality education and instilling the concept of lifelong learning.

Also following in his father’s footsteps the new King, is acutely aware of the plight of the Kingdom’s farmers and is active in bringing to his subjects solutions tackling agricultural problems, in addition to the application of agricultural technology to increase productivity and the improvement in the quality of agricultural production.

He again like the late King emphasizes full-cycle agricultural activities, considering that they will help improve the quality of life for farmers. It is believed all his fathers numerous patronages will now come under his wing.

When was Vajiralongkorn actually crowned?

The much loved King Bhumibol Adulyadej died in October 2016.  It is a royal tradition, that the throne should not remain vacant, therefore it was expected that the Prince would succeed to the throne immediately. Instead he asked for time to privately mourn his 88-year-old father, who had held the throne for over 70 years.

It was not until December 1st, 2016, that the Prince ascended the throne as the tenth king of the Chakri dynasty and with it, the name King Rama 10 – 50 days after his father’s death.

It was later clarified that because of this ancient tradition; that the throne should never remain vacant, His Majesty the King’s reign will be considered, as beginning on the day HM King Bhumibol died. October 13th, 2016

We humbly join the Kingdom of Thailand in offering our best wishes to His Majesty Maha Vajiralongkorn Bodindradebayavarangkun and long may he reign.