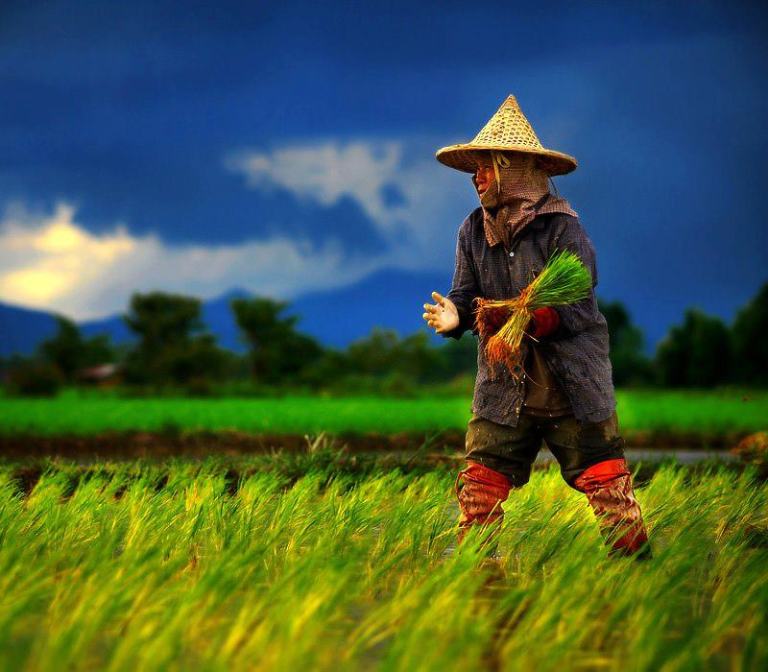 Rice has for centuries has been a staple diet of the Thai people, it also plays an important role in Thai culture, but in more recent times rice farmers, have found their lives have become even harder.

Climate changes have added to their already difficult lives, as they suffer from water shortages, plus an over-supply in the world market, which in turn has meant rice prices tumbling to a 10 year low. Added to their woes is their own desire to grow high-quality, rice which unfortunately results in low-yields. All this has meant many in the industry are now looking to other crops to grow.

Those that stick with rice, (Bloomberg 2016: states 16 million people still farm rice in the Kingdom), are more readily looking to their past and calling on ghosts, spirits, gods and deceased relatives, for help in their daily struggle with the elements.

Rice farmers across the Kingdom, have for eons used Rice Offering Ceremonies, (Known as Phitee Tham Kwan), to gain an upper hand on what-ever mother-nature throws at them, even though 94% of the population are Buddhist, they believe in the main that spirits are found every-where, that includes rice, which is home to the goddess Mae Phosop.  (Also known as Kwaykgaw).

This immortal being is usually depicted as beautiful women, sitting with her legs folded under her, dressed in a traditional Sabai Chieng, (a garment used by women that is wrapped over one shoulder, then around her chest and back).

In her right hand she carries stalks of rice, while in the other she carries a bag of loose rice. Above all else the goddess is seen as fragile and easily scared, therefore the Rice Ceremony is held to calm her and invite her to stay within the paddy fields, where it is hoped she will provide rich crops.

These ceremonies are not confined to Thailand and many of its neighbours have their own form of gods and goddesses, who bring both good fortune and at times bad luck.

With decreasing incomes for rice farmers, more and more farmers, from across the Kingdom are now following their ancestors, in performing Rice Offering Ceremonies, these take place three times a year, firstly when the rice grains develop, then before harvesting and once more before threshing.

Thai Goddess of Rice. Chaleo and  Taehlw – Basket of Offerings

Generally around October, planted rice begins to form stalks that rise from the inky black water of the flooded paddy fields. These same stalks also begin to form into ears, this is when it is believed the spirit of the goddess, residing in the crops is pregnant, (tang thong). As a gesture of gratitude, for the prosperity Mae Phosop has bestowed on the farmers rice paddies, she is given offerings in the hope she will continue her labor until the crops are ready for harvesting.

This is also the time when the farmers will plant bamboo sticks in these fields, topped with a chaleo, a multi-angular figure made from strips of bamboo, to show to their neighbours that their rice is pregnant. These symbols serve two purposes, one to warn others not to enter the fields and second to ward off evil spirits.

Farmers in their fields with Mae Phosop, a Chaleo and their basket of offerings

Later in the year around December, the rice will be harvested, prior to which farmers and their families will perform another ceremony, to warn the goddess that they plan to use their sickles to cut the rice.

It is said that Mae Phosop, is afraid of the sickle and the water buffalo used by the farmers, therefore they must explain in advance, their plans to start bringing in the crop. This prior notification, can be given at any time prior to the thrashing season, but cannot take place on a Sunday which is seen as Mae Phosop’s birthday.

During this ceremony, images of the goddess are taken from the farmer’s Spirit Houses, or House Shrines, into the fields. (House Shrines are predominately used by Thailand’s Hill Tribes, while spirit house are usually placed out-side of the home and can be seen every-where in the Kingdom).

In this ceremony Mother Phosop is offered any number of inducements to continue her work and to thank her for her help to date. These offerings vary from village to village and from province to province, ranging from young banana and coconut trees, to food such as sugar cane, boiled eggs, fresh local fruit and betel nuts.

Added to her list of rewards are candles, perfume oil, fragrant flowers, face powder, a hair comb, along with joss sticks, red cloth and a couple of red and white flags. All the offerings chosen, are amassed into a single bamboo basket, called a taehlw, which will be placed in an auspicious place in a field, or alternatively attached to the Chaleo.

After the ceremony is concluded the images of the goddess are invited back to the farmers homes, where it is hoped she will stay, until she is asked again the following year, to bestow her blessings on the rice crops, the farmers and their families.

The ceremony takes place just prior to starting the threshing of the rice, Spirit offerings are placed on the post in the center of the threshing floor, this is done to invite the goddess to leave the fields and allow her children to be threshed.

Once the rice threshing is complete, monks will sprinkle holy water onto the rice that has been set aside for planting next year’s crop. With the hope that this will bring health and wealth for each farmer, called Blessing of the Rice or Bidi Miji Mangala

Other Ceremonies and the Thai Lunar Calendar

It is said that in the distant past, a variety of other spirit offerings were once made, including special events prior to seeding, transplanting and to invite the rice into the threshing floor. Added to this list of once common ceremonies, farmers also had to deal with the prohibitions that once existed on when they could plow, transplant, harvest and thrash the rice. With the most auspicious dates to undertake this work calculated, by Brahmin astrologers using the Thai lunar calendar.

Re-engaging the Thai People with their own folklore

While festivities celebrating Thai family life and its close links with Rice production, have been taking place across the Kingdom for centuries, it was not until Queen Sirikit gave her royal patronage to the ancient customs, of Thai folklore in August 2008, that paying homage to Mae Phosop by rice farmers, during the different stages of rice growing, is once again an important part of the annual celebrations held across the Kingdom.

Fortunately  this return to a bygone era, is not the only link the Thai people have with their ancient beliefs in spirits and gods of rice, in May each year the Kingdom also has its own 2,500 year old, Royal Ploughing Ceremony, held at the Grand Palace and the nearby fields of Sanam Luang. Bangkok. It is during this annual televised event where one can see a number of these once every day ceremonies being carried out. See our post Royal Ploughing Ceremony

Weather or not these ceremonies, with their gifts and thanksgiving actually work, is debatable. What can be seen in daily rural life is the peoples strong belief in what some may describe as the occult….. but in truth is simply a part of what it takes to be Thai.