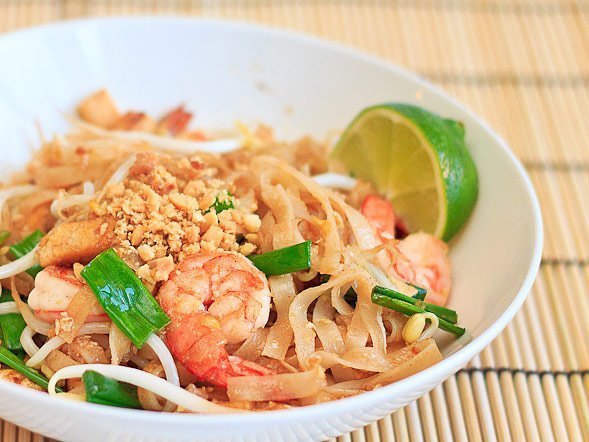 Poo’s back FoodTubers and this time she’s got a classic Pad Thai recipe to share with you. Fresh juicy prawns stir fired with tofu, crunchy veg and egg fried rice noodles. Serve with a wedge of lime, chilli powder and crushed peanuts,better than any takeaway and cheaper!

listen), “fried Thai style“) is a stir-fried rice noodle dish commonly served as a street food and at casual local eateries in Thailand. It is made with soaked dried rice noodles, which are stir-fried with eggs and chopped firm tofu, and flavored with tamarind pulp, fish sauce (nampla น้ำปลา), dried shrimp, garlic or shallots, red chili pepper and palm sugar, and served with lime wedges and often chopped roast peanuts.[1] It may also contain other vegetables like bean sprouts, garlic chives, coriander leaves, pickled radishes or turnips (hua chaipo หัวไชโป๊), and raw banana flowers. It may also contain fresh shrimp, crab, chicken or another protein. Vegetarian versions may substitute soy sauce for the fish sauce and omit the shrimp.

A dish of stir-fried rice noodles is thought by some to have been introduced to Ayutthaya during the time of the Ayutthaya Kingdomby Viet traders, and subsequently altered to reflect Thai flavor profiles.[3][citation needed] Others believe that the dish is of Chineseorigin, and the etymology of the dish’s name suggests it.

Plaek Phibunsongkhram promoted pad thai in his campaign to establish Thai nationalism.Thailand was a main exporter of rice, and the government hoped to increase the amount available for export. As Prime Minister of Thailand between 1938 to 1944 and from 1948 to 1957, Phibun hoped to westernize the country. In 1939, he supported the change of name of the country from Siam to Thailand. At the time, wheat noodles were very popular in Thailand, but Plaek Phibunsongkhram sought to eliminate Chinese influence. His government promoted rice noodles and helped to establish the identity of Thailand. As a result, a new noodle namedsen chan was created.

Pad thai was made popular in Thailand during World War II. Pad thai has since become one of Thailand‘s national dishes. Today, some food vendors add pork-chops to enhance the taste (although the original recipe did not contain pork because of the government perception that pork was a Chinese meat). Some food vendors still use the original recipe. It is a fast, delicious and nutritious dish, and has become popular in many countries around the world