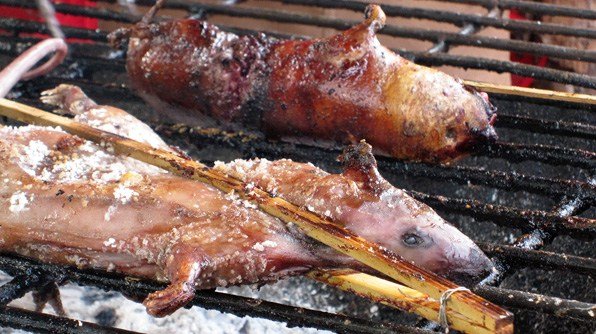 Thai Food and Recipe Rats. While many may cringe at Thailand’s love of eating creepy crawlies, let’s not forget the ever so tasty Rat, also has an honored place on the table. Rats on the menu in Thailand

This number is easily dwarfed by the amount of rats that are caught and eaten in vast farmlands across the north, northeast, and central parts of the country. The kingdom is ranked third behind Cambodia and Laos, but just ahead of Myanmar, when it comes to consuming the meat, of these normally small whiskered creatures.

For those of you wondering how Thais can stomach these despicable animals, we must make it clear that when we say rat meat, we’re not talking about sewer rats found in city areas. We’re talking mostly of farm rats in the countryside which are much cleaner and toxic free.

Apparently, Rats have been on the menu in Thailand for centuries. It is believed, that the rural folk are more inclined to such delicacies, for farmers it is a simple part of agricultural life, farmers catch wild rodents to prevent them from damaging the crops. Said rodents are not wasted, ending up on the supper table that evening.

Rodents are already common foods in many countries and are valued items of commerce. It has been estimated that 42 of 383 cultures eat rodents. But the fact that they are a major meat source is almost unrecognized. This is due in part to cultural misunderstanding. Rodents suitable for human food or other products do not live in filth, like common rats. They are clean and vegetarian. Like rabbits, they eat grass and grains. Taken from Appropedia

Daily Mail: They are a popular delicacy in some parts of china and are eaten in a variety of dishes, but the biggest ones can also be skinned and turned into fur coats

In China farming rats is becoming big business not only in the monies that can be made by the farmers but in the size these rodents can grow, in a Daily Mail article written in 2012, it states these animals can reach the size of a small dog, growing up to 50 centimeters in length and four kilograms in weight, that’s not all, Rat meat costs four times more than chicken or pork and twice that of beef, it is also believed in some parts of China, to cure baldness

The cultures of many other ASEAN countries such as Singapore, Indonesia and the Philippines are highly influenced by the West and theoretically don’t have such preferences, for this form of meat

Across the Globe rats are now being seen as a potential answer to bushmeat, in a Scientific American article written in 2011 states:

The rising and often illegal trade in bushmeat—wild-caught animals, often threatened species such as primates, birds and elephants—threatens African biodiversity and could drive numerous species into extinction. Finding replacements for that trade could solve the need for both income and subsistence in many African communities. The answer, according to experts speaking at a Nairobi this week, could include promoting beekeeping and farming jumbo-size African rodents known as cane rats

Capybara are also seen as pets

Latin America has a long history of eating rodents and many of its rural markets will carry guinea pigs, plus the rabbit looking viscacha and the world’s largest rodent the capybara. This highly social species, can be found in groups as large as 100 individuals, but usually lives in groups of 10–20. Like it’s far distant cousins in China the hide is sort after and its thick fatty skin is used in the pharmaceutical trade.

While not commonly seen on today’s menus, in the United States, squirrel (classified as a rodent) was once a much sought after treat. Fat, nut-fed grey squirrels used in Brunswick stew, which has been called the most famous dish to emerge from the campfires and cabins of Colonial America. Thomas Jefferson liked it. Today, squirrel is the country’s number two game animal (after deer), and many are still eaten. Taken from Appropedia

Rat eating locals in Thailand, are found mostly in the northeastern provinces. However, people in the north and central parts of the country are also found to have a taste for it. While Provinces such as Udon Thani and Suphanburi are widely known for the trade in these animals.

There is presently no large scale farming of these rodents, even though the Kingdom is not oblivious to rearing animals for the world market, for example, it is the world’s 10th largest producer of chicken, the world number one, for farming crocodiles and warm water shrimps, plus it is very quickly becoming the number one exporter of insects so why not Rats?

So how do Thais prefer their rat meat? …………..Mostly, we like them grilled over coals, basted with a chili sauce, crispy on the outside, moist on the inside. However, rat meat is widely found in spicy Thai soups, but don’t worry this will only be intentional and seen in the price….. as rat meat is far dearer than chicken or pork here in the Kingdom. See more in our post: Thailand: Little Known facts about the Kingdom

We also use rats to find landmines

There is an extensive landmine problem within the Kingdom, existing along all 4 borders. Initial surveys made by the Royal Thai Army and Navy in 1998 indicated that approximately 796 square kilometers of land is unusable, affecting the livelihood of 400,000 residents.

That’s where the rats come into their own, with their keen sense of smell and their expendability, they have been used since 2010, to find these still live mines. See APOPO for more

Make no mistake! Rat meat does not come cheap. Prices range from 180 to 250 baht per kilogram. So far, there is no known brand name for rat meat traders, but who knows, we could have a whole new business just waiting to be discovered…….. MacRat Burgers…….!!!!!!!!!

Thai Food and Recipe Rats. While many cringe at Thailand’s love of eating creepy crawlies, let’s not forget the ever so tasty Rats on the menu in Thailand