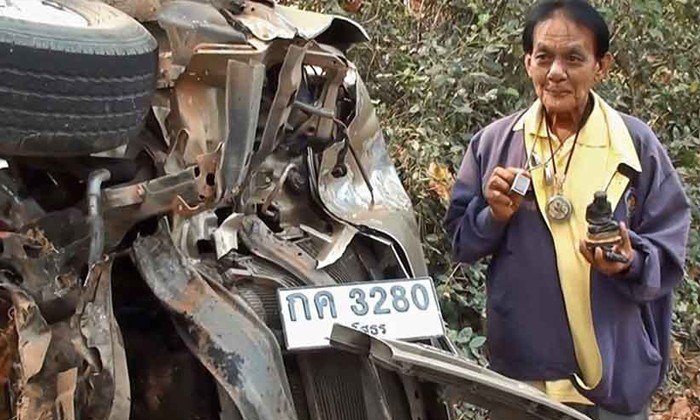 Another year of Ghosts Ghouls and Goblins

Thai Culture Ghost Stories. With the start of the Buddhist New Year just around the corner, we look back on last year, at what supernatural stories made the headlines in Thailand. (See previous year’s post: A Year of Ghosts, Ghouls and Goblins)

These 14 stories aren’t confined to late-night radio programs or web forums, but found at times on the front pages of national newspapers.

Thai model live on TV is possessed by a ghost

July 2016: A young model was being interviewed on a Thai TV show when she told the host she was often visited by a sinister ghost.

It was reported in an article in Coconuts.co; thirteen minutes into the TV interview, Thippawan “Pui” Chaphupuang, announced that a “pop” — a cannibalistic spirit in Thai folkore- had come to possess her, with the result the host interviews the spirit.

The entity appearing to possess Pui’s body refused to say who had sent it and demanded pigs’ blood as the woman writhed around and shrieked, strangely.

Suphanburi – Central Thailand – September 2016: People are pouring into a temple in U-Thong, where a cave being prepared to house a Buddhist image, has thrown up the face of a deity in the carved rock.

It was reported in an article in Sanook.com; that believers can see the face of Phra Mae Thorani an important goddess in Buddhist mythology, known in English as “Mother Earth”.

Those attending pay homage to the image and then use the light from their cell phones, to find the numbers, on the walls.

The image of Phra Mae Thorani is seen in many Wat’s in Thailand, usually personified as a young woman wringing the water out of her hair to drown the demon Mara.

Ghostbusters chase 300 ogres out of town

Kalasin – North East Thailand – October 2016:  After evil forces had caused the death of local people from 5 different villages, villagers agreed to spend 50 baht, per household to bring in experts and buy, the necessary ghost busting equipment.

It was reported in an article in sanook.com; the proceedings started when professional ghost buster Bunsong Prathumchai, and 14 of his disciples, got the ball rolling with a ceremony, held at the town hall that included flowers, incense, a sacred sword, various woods including that from the tamarind tree and an assortment of other tools of the trade.

Following this the action moved to the five affected villages in the Nong Yai sub district where villagers took part in the “siang khong” part of the exorcism where the phee pop are hunted down and chased into an earthenware jar covered in a sacred cloth.

Once all the rituals and rites were successfully completed, some 300- less than happy ogres were trapped in the jar. To add to the spirits woes, and to rid the villages of the troubles they had suffered, the jar was then incinerated.

Prachin Buri – Central Thailand – March 2017: Villagers returned to a temple in Prachin Buri, to fulfill their promise given to a “lottery goddess”, after they win the lottery.

It was reported in an article in the Nation; the villagers repeated winnings are put down to the spirit that lives within the ta-khian log.

Many Thai’s believe a ta-khian tree or hopea odorata is somehow haunted by a female ghost even after the tree had fallen. The log has been unearthed from a bottom of a river, later it was taken to the nearby temple

It was reported in an article in 77Jowo.com;  the tree trunk – called Ton Takhian” in Thai – is believed to be inhabited by a spirit and if you are nice to her, she will give you the winning lottery numbers.

Apparently there is ample proof of the five meter long trunk’s power to change lives – three people already have got 100,000 baht prizes.

Now it appears everyone is convinced, with people flocking from all around to the site of the trunk in Ban Phon Ngam, Na Sai district.

It was reported in an article in Sanook.com; The creature was delivered stillborn at the home of Samrong, 47, in the  Klong Thom district of Krabi.

Samrong said that she had already won prizes in the lottery three times while the calves – that are actually joined twins – were in the uterus. They were born with two heads, six legs and 2 tails.

She plans to have it stuffed and treated with formalin and put in a four sided glass case. Then it will be kept at the temple of Wat Tru Toey, where it is believed many will come to pray to the calves, as there are those who believe that the dead animal is auspicious.

Buriram – North East Thailand – June 2016: 52 year old female resident is accused of being possessed by a pop, a type of “hungry ghost” known for feasting on human and animal entrails.

It was reported in an article in Khaosod.com; the woman from a small village near Buriram, had for years suffered hatred and even physical abuse from superstitious neighbors, her daughter alleges in a criminal complaint.

The victims daughter, 30-year-old Nattanida stated about three years ago, some people in her village started a rumor that her mother, Phan was possessed by a pop. Recently, Nattanida said, the rumor intensified and Phan was blamed for the deaths of several people.

She said some villagers went so far as to forcefully conduct an exorcism of Phan in which a necromancer slapped her, in an effort to drive away the ghost.

Bribing the spirits to get into the Right University

Bangkok – June 2016: June is a time when even the most modern Thai student, may resort to calling on the spirits for help; such as bon, a sort of prayer-cum-bribe in which promises are made in return for divine assistance.

It was reported in an article in Khaosod.com; while today’s students are as superstitious as those that proceeded them, they’re no longer taking their bribes of pig heads, traditional dances, floral garlands or the usual ceramic zebras, to shrines in seeking divine help.

Students are now embracing social media like never before and are now placing their bribes on line.

“Bribe – above picture reads: If my sister gets into Faculty of Law, Chiang Mai University, I will give away all the money in this photo I just withdrew,” @ARTX92 tweeted along an attached photo the author insisted was genuine. That went on to be retweeted 21,000 times.

It was reported in an article in Daily News;  the corpses of the chickens were all left – they just had a large hole and the intestines and livers were all missing.

Tossapon Phokan who looks after the animals said that this indicated that it was not the work of dogs or snakes, who would not leave the bodies of the chickens if they attacked. He said it was likely the work of an aggressive ghost known in Thai as “Phi Phop”.

Spirits cause of death of Burmese Hill Tribe woman

Near Bangkok – October 2016: Police in Samut Prakarn are investigating the mysterious death of a Burmese woman hired to look after a Thai woman’s one year old child.

It was reported in an article in Sanook.com; local police attend flats in Soi Khajornwit, after the owner Yuphin, found the body of her nanny lying on the floor. The victim had a wound to the head and bruising on her face and body.

She was found fully clothed and wrapped in a blue blanket, while there was blood evidence but no signs of a struggle in the room.

The owner told the police that her nanny liked to dabble, in the supernatural and kept earthenware dolls in her room. She went on to add another resident of the flats had seen the spirit of a child emerge from her room and that she was not sure whether the death was self harm or the work of spirits.

Mukdahan – North East Thailand – September 2016: Villagers are clambering over themselves to make merit at a north eastern temple after reports that a magical fungus is producing lottery numbers

It was reported in an article in Daily News; the Abbot of Wat Ban Na Saamen, Tambon Nam Saeng, Amphoe Don Tan, Mukdahan, said that the huge black and white mushroom grew on a log outside the monks’ quarters – and is believed to be magical.

The fungus was later cut out and put on display in a shrine in the temple, where visitors now prostrate themselves before it and pray for the winning lottery numbers.

Chaiyaphum – North East Thailand – October 2016: Residents of Baan Nong Mong, gathered to give each other support, as they invited Phra Kru Opas Sitthwimol, a local monk, famous for evicting ghosts, to perform a ceremony in the middle of their village.

It was reported in an article in Coconuts.com; the decision was made after the locals reportedly spotted “floating lights,” which they assumed were the floating heads of Krasue ghosts. Not to mention, five people in their village recently died from mysterious causes.

Yasothon – North East Thailand – February2017: A 60 year old Thai man emerged from the wreckage of his pick-up truck, without so much as a scratch, to claim that his miraculous survival was down to his amulets and a statue he had on his dash board.

It was reported in an article in Sanook.com; the driver Sukhon Phuangsri, said that he was on his way back to Yasothorn after attending a family funeral and after, he was overtaking another vehicle he lost control, crashing into a lamppost.

Chaiyaphum – North East Thailand – March 2017: Villagers are convinced malevolent ghosts are at work after the death of four cows and other animals in their area.

It was reported in an article in Sanook.com; the death of a six month pregnant cow in Sok Pla Duk sub-district was the final straw. Locals are sure that demons and ghosts are to blame.

To add to the weight of evidence the villagers said that many other animals were dying over the last few months – and often on the eve of Buddhist holy days (Wan Phra).

Now they are preparing for ceremonies to banish the evil spirits from the area before they strike again.

This usually involves hiring a specially trained “ghost buster” who orders the spirits to show themselves. Then sticks are used to chase the spirits into an earthenware jar for capture and removal.