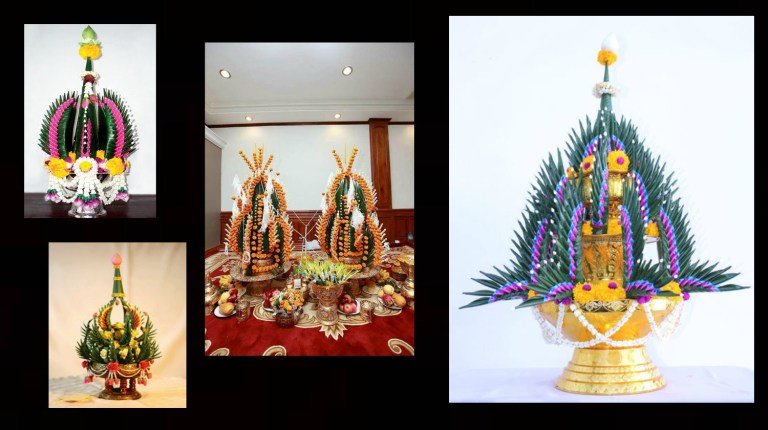 Thai Culture Ceremony. Thai people and their beliefs in multiple souls and the Basasii Ceremony

Few people of northeast Thailand would consider undertaking an important endeavor without holding this ancient ritual, Ceremony to Return a Wandering Soul. This could include; taking a long journey or moving home or starting a new job, the arrival of a new baby, when a person reaches the age to be ordained as a monk, or when a person gets married, and so on.

The baasii ceremony is an important part of Lao/Isaan culture, known as Baci in Lao and in Thai as บายศรี, (pronounced bai si) and su Kwan (Thai: สู่ขวัญ, pronounced: su khwan) loosely translated means “calling of the soul.”

Returning a soul to a person

In Lao/Isaan folklore, each person has 32 Khwan (spirits/souls), dwelling within them.  If any of the Khwan is frightened and wanders away from their owner, then it is believed the person may fall ill. These souls must be called back and bound to the body to ensure a person is properly protected before any important undertaking.

The idea of spirits living within a person is a common belief in the people of this region and with their northern, Thai neighbours:

Hill Tribes in Thailand and their beliefs

The Karen people believe each person has 37 Klar (Kwan). While the Hmong, believe we all have several souls which at times are scared away from their host, in which case a soul calling ceremony (hu plig), is performed to entice the soul home with chanting and offerings of food.

The Baasii Ceremony – Ceremony to Return a Wandering Soul

The ceremony can be performed on any day throughout the year, but is usually held before noon. The people attending, will be expected to wear their best traditional clothes, with a shoulder cloth (phaa biang), on the left shoulder.

Traditionally they all sit around a small table, on which a ceremonial tray called phaa khwa is placed. Onto this is added beautiful designed, decorative cones made of fresh banana leaves, called maak beng, to which are attached numerous write strings. (Today the tray is almost forgotten in this ritual and the floor is more commonly used).

Added to the tray are a variety of offerings including: Rice grains, bananas, steamed sticky rice in banana leaves, bowls of sweets or dessert, boiled eggs, a boiled chicken, flowers, incense sticks, candles, rice whisky and cloth. If the ceremony relates to a human, then personal item such as rings, mirror, comb, money, bracelets, necklace, and perfume, are added.

Sitting in the right direction

Dr.Wajuppa Tossa writes in his post Lao Folk Literature, that ‘Seating position is important in this baasii suu khwan ceremony.  After everything is prepared, people sit around the tray touching it, facing the good direction of the day.’

He goes on that ‘One must avoid facing the bad direction of the day.’

Throughout Thailand people believe in lucky and unlucky, days and colours see our post Colourful days in Thailand

The ceremony begins with everyone raising their joined hands, when the mo phon (medicine man or Village elder, who have once been Buddhist Monks), lights the incense sticks and candles. He starts by paying homage, and asks for permission to carry out the ritual, followed by the Brahmin Mantra, (A group of words believed by practitioners to have psychological and spiritual powers).

The exact words are depend on the occasion but usually follow the same course, at first the leader of the ceremony will explain how auspicious the day or the time is for the ceremony, he goes onto describe the baasii tray, the food and the people who love the person. He will add that all of this is to endear the spirit and to invite it to return to the body it has left. He may intermittently call “ma yoe khwan oye (Come Spirit, please come)” to which the gatherers will echo the same in unison.

As the shaman recites the blessing, everyone touches the string attached to the offerings or, if they can’t reach, the elbow of someone touching the strings. Towards the end, the mo phon will give blessings to the person and all those attending. He then signifies the almost ending of the chanting, by dipping prepared auspicious branches or flowers in the whisky, which he then sprinkles over the person and everybody else in the ceremony, all the while reciting further blessings.

Tying the soul to a person

His last duty is to tie a piece of white, string around the wrist of the first person. Once he has finished, other participants continue tying loops of string. Yet more white string is produced and finally everyone ties string around each other’s wrists, while whispering good wishes.

It is believed that the string is to keep the spirits within the body. The string must be worn for at least three full days to ensure the desired effect, after which it can be coaxed off…… but it must never be cut or bitten off, as this would represent the cutting of ties and friendly connections. After all the rituals are completed, people will eat together and renew friendships.

In recent times the thread is sometimes seen in yellow, red and black colours, to represent a particular occasion; red symbolizing bravery, yellow representing faith and black sharing a person’s loss or grief