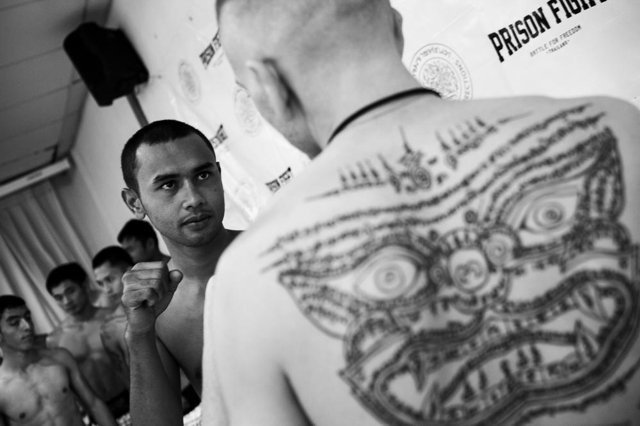 THE MAN GROANED from the painful point of a needle as a tattoo artist pierced his arm, making way for the black ink to run under his skin.

Instead of sitting in a luxury tattoo shop on Khao San Road, he was behind a three-metre-high wall of Bangkok’s Thon Buri Remand Prison, the overcrowded home to about 6,000 inmates.

Like many prisoners he will be released after paying for his crime, but he will also be marked forever as a jail inmate.

Tattoos have become the label of a jailbird – a symbol for many who’ve spent time behind bars. For inmates who’d lived in jail for many years, it was easy to recognise where the tattoo had been made, inside or outside of prison.

When the individual got out to try to make a new life, the inked arm was a permanent marker telling the world this man was a “bad guy”, barring him in future from many an opportunity. The pressure would force him and many of his fellow jailbirds back into a prison life cycle.

Receiving a long sentence from the court would give a prisoner plenty of leisure time to ponder the wisdom of these tattooing sessions.

Ae (assumed name) was among 6,000 detainees in the Thon Buri jail. His whole body was covered by tattoos, which left only a clear space on his face. It took about eight years of needle work to achieve that painful beauty.

He had been jailed three times for sexual abuse of an underaged child, and possessing and selling drugs. His first time in jail began when he was 20 years old with a mind fearful about the world behind a wall. He was afraid of being different from the other prisoners, but then he found tattooing, which was so popular among his companions behind bars.

“I took it on my arms first, and then chest and legs followed. My cell friends thought the tattoo was cool and they admired it.”

Tattoos and jailbirds were like a heaven-made couple who came together in a hell-like place. Like other partnerships in the world, it all starts with sweet joy but is followed by bitter suffering. People with tattoos often cannot get a decent job, especially those who got them in jail. Ae said when money was needed, drugs came along like a priest finding a lost soul.

“It was my first time as a drug dealer, so I was not very good at it and I was back in jail again and again. Therefore, I’ve used my tattoo as life’s vengeance – but I’ve also had to pay a lot to cover my whole body with painful ink,” he admitted.

“I was personally fascinated by tattooing, especially in jail where getting a tattoo came at little cost. I planned to use my passion for tattoo art to make a new life. I might open my own tattoo shop later because tattooing is the only thing I’ve learned during my eight years in jail,” he said.

It was also true for Bee (assumed name). Bee was another prisoner in Thon Buri jail. He said that people with whole bodies covered in tattoos were seen as constant lawbreakers, and outsiders would picture them as savages.

Bee admitted he’d been jailed previously for selling drugs, and this time he was locked up for six years. “When I got back to society, people would look down on me and judge me for my tattooed skin. I could not get a job, so I returned to drugs,” he said.

“Most of the prisoners have nothing to do in their leisure time, so tattooing is a big interest. I saw them walking around with cool tattoos, so it provoked me to have one too.

“Nobody was forced to have a tattoo, it was all a personal decision. I got my tattoo after drafting it first with a ballpoint pen – then I went to see a ‘master’ to make my draft come alive. Most of the tattoos in prison are not much different – dragons, Japanese koi fish, or angry devil faces. There were no gang tattoos, because those with the tattoos would have been given them before their jail time,” he said.

Bee said those with a whole body covered by tattoos, including faces, might be making a statement about their lives.

A jail problem was that no matter how many prisoners were fascinated by tattooing, it was still an offence to take a needle into the institution and would be punished. Such a threat could not diminish prisoners’ interest in tattooing, however, and many took the risk and smuggled needles into the lockup.

Meanwhile, to get a tattoo, the prisoner would design one ahead for their tattoo artist, known among inmates as “The Master”. This man would have several years of experience in tattooing and was known for his drawing skills.In each tattooing ceremony, 10 to 15 needles would be purified by alcohol before painting began in ballpoint pen-ink on the subject’s back. Each tattoo session would cost around Bt500 to Bt2,000, which customers would pay by cash or packs of cigarettes. The vocational academic and professional career trainer of Thon Buri Remand Prison, Wiwat Rangketkarn, said the main duty of the Corrections Department was to detain prisoners. But career training was also implemented as part of the sentence in a bid to return the prisoners to society as good citizens.

“The prisoner could be trained in several areas according to his interests – like carpenter, metal worker, or artist, which focused on the Ten Traditional Arts. They include carving, engraving, turning, casting, moulding and sculpting, model building, lacquering, metal beating, and plastering.

“The prisoner would focus on learning new skills, and avoid breaking the law in future. As we know from keeping in touch with former prisoners, many could sustain their lives and make a living from skills learned from us,” he said. With many of those flocking to the career programme interested in tattooing, the prison officer answered their desires by bringing a tattoo artist to train them. And with the skills learned, the insiders can perhaps make a living by doing this outside.

Looking for rare Thai fruit & vegetagle seeds? Check out our online store as we deliver Worldwide