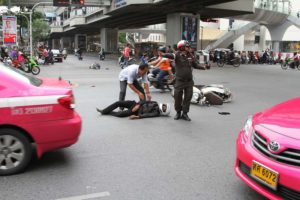 Public Health Minister Piyasakol Sakolsatayadorn said Thailand records the most number of road accidents in Asia and the second highest in the world, with the annual Songkran holiday alone recording an average of 2.3 deaths and 160 injuries every hour.

Statistics show that the number of traffic-law violators increases during Songkran, the New Year and other long holidays. Teenagers are among the most frequent repeat violators. To help increase the effectiveness of probation measures, Nonjit Netpukana, a senior official of the Department of Probation, said a green light was sought from the Cabinet to send those who commit minor offences to work at hospital morgues.