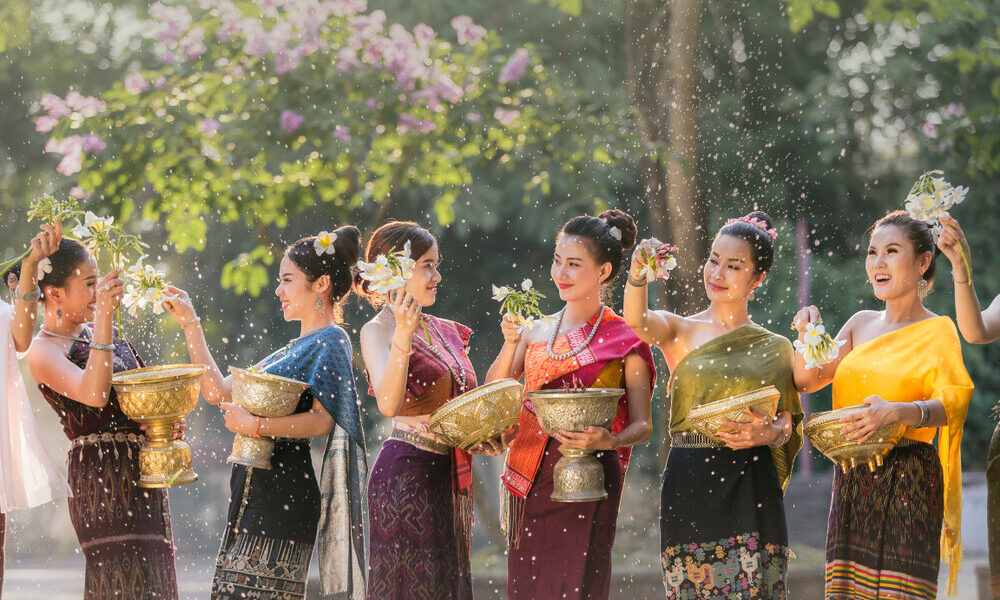 Songkran (Thai: เทศกาลสงกรานต์, pronounced [tʰêːt.sà.kāːn sǒŋ.krāːn]) is the Thai New Year’s national holiday. Songkran is on 13 April every year, but the holiday period extends from 14 to 15 April. In 2018 the Thai cabinet extended the festival nationwide to five days, 12–16 April, to enable citizens to travel home for the holiday. In 2019, the holiday was observed 12–16 April as 13 April fell on a Saturday. The word “Songkran” comes from the Sanskrit word saṃkrānti, literally “astrological passage”, meaning transformation or change. It coincides with the rising of Aries on the astrological chart and with the New Year of many calendars of South and Southeast Asia, in keeping with the Hindu Calendar and Buddhist calendar. The New Year takes place at virtually the same time as the new year celebrations of many countries in South Asia like Bangladesh, Cambodia, China (Dai People of Yunnan Province), India (Baisakhi in Punjab, Gudipadva in Maharashtra, Pana or Mahabisuba Sankranti in Odisha, Ugadi in Andhra Pradesh, Vishu in Kerala etc.), Laos, Myanmar, Nepal, and Sri Lanka.

In Thailand, New Year is now officially celebrated 1 January. Songkran was the official New Year until 1888, when it was switched to a fixed date of 1 April. Then in 1940, this date was shifted to 1 January. The traditional Thai New Year Songkran was transformed into a national holiday. Celebrations are famous for the public water fights framed as ritual cleansing.

The meaning of Songkran

Songkran is a term derived from Sanskrit संक्रान्ति saṅkrānti meaning ‘to move’ or ‘movement’. It derives from the movement of the sun from one position to another in the zodiac. According to its literal meaning in Sanskrit, a Songkran occurs every month. However, the period that Thai people refer to as Songkran happens when the sun moves from Pisces to Aries in the zodiac. The correct name for this period should actually be Maha Songkran (‘great Songkran) because it coincides with the arrival of a New Year. The Songkran festival is, therefore, a celebration of the New Year in accordance with the solar calendar. The celebration covers a period of three days: 13 April is regarded as Maha Songkran, the day that the sun moves into Aries on the zodiac or the last day of the old year. The next day, 14 April is called Wan Nao, the transitional day between the old and the new years, and 15 April is called Wan Thaloeng Sok (Thai: วันเถลิงศก ‘to begin a new era or year’), New Year’s Day itself.

The Songkran celebration is rich with symbolic traditions. Mornings begin with merit-making. Visiting local temples and offering food to the Buddhist monks is commonly practiced. On this specific occasion, performing water pouring on Buddha statues and the young and elderly is a traditional ritual, representing purification and the washing away of one’s sins and bad luck. As a festival of unity, people who have moved away usually return home to their loved ones and elders. Paying reverence to ancestors is an important part of Songkran tradition.

The holiday is known for its water festival. Major streets are closed to traffic and are used as arenas for water fights. Celebrants, young and old, participate in this tradition by splashing water on each other. Traditional parades are held and, in some venues, “Lady Songkran” or “Miss Songkran” is crowned. where contestants are clothed in traditional Thai dress.

While allowing Songkran 2022 festivities to be held under universal prevention and COVID-free setting guidelines, the government advised everyone planning to enjoy the Thai New Year to get fully vaccinated and to undergo a self-ATK at least 72 hours before joining group activities.

Activities should focus on the traditional and cultural aspects of the celebration, such as, Song Nam Phra (a ritual that involves the pouring of scented water onto a temple’s sacred Buddha images), Rot Nam Dam Hua (a ritual where young people prepare jasmine water and Nam Op scented water with which to wash their parents’ or elders’ hands to ask for blessing), traditional performances and processions, and music performances.