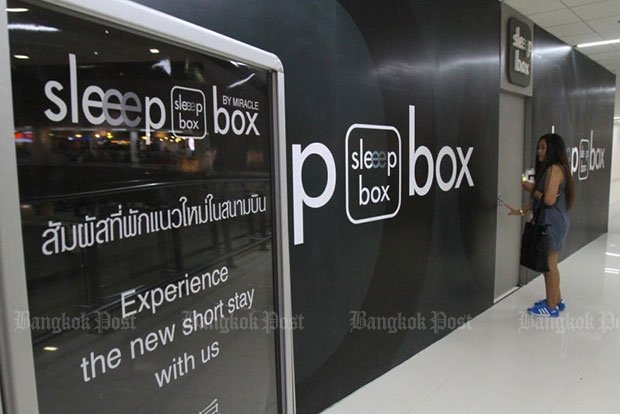 The Miracle Group is eyeing Suvarnabhumi airport for its next “sleep box” hotel after the soft launch of the sleep cabins at Don Mueang airport this week.

Aswin Ingkakul, executive director of the Miracle Group, said the company is negotiating with the Airports of Thailand Plc (AoT) over the proposal for Suvarnabhumi airport.  He said the sleep box hotel at Suvarnabhumi could open this year. It is aimed at serving passengers who are waiting for connecting flights. The sleep box hotel at Don Mueang airport is the first of its kind in the country.

There are 25 sleep cabins available, but only five sleep box rooms are available during the soft opening. The hotel is expected to be fully operational at the end of this month.

The sleep box rooms at Don Mueang airport are partitioned into five sections, each consisting of five, 15 square metre rooms.
Each cabin of the sleep box hotel, located on the fourth floor of Terminal 2 of Don Mueang airport, is equipped with a bed and a private toilet and can accommodate two guests.  A television and Wi-Fi are also provided.

Mr Aswin said it is too early to predict how the sleep box hotel will fare. Compared with Japanese capsule hotels, which charge an average of 400 baht per hour without en suite bathroom and meal voucher, he said the sleep cabins at Don Mueang are excellent value.

According to Mr Aswin, the Miracle Group will launch an office facility, Co-Working Space, on the fourth floor of Terminal 2 covering 700 sq m in the next few months. It will be fully equipped with modern office accessories.