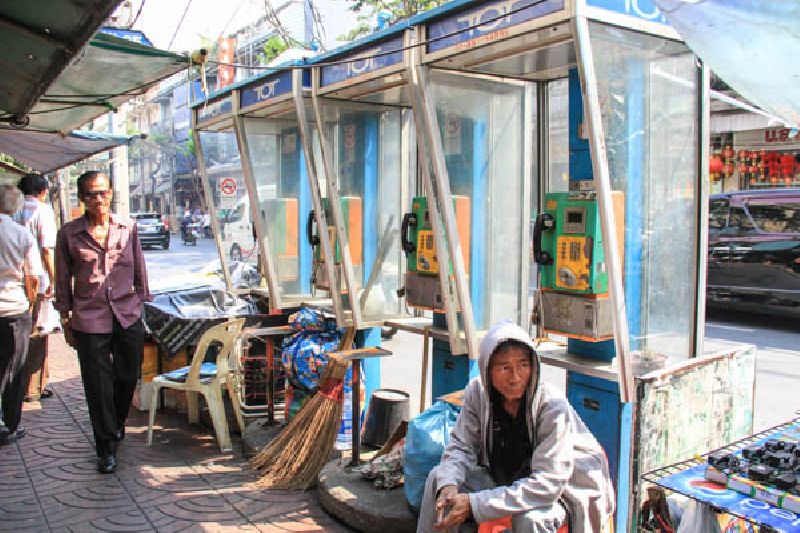 Vendors and street sweepers store their goods in phone stalls Thursday around Phadung Dao and Charoen Krung roads in Bangkok.

Salute Bangkok’s Latest Endangered Species. BANGKOK — Red and blue they stand in plexiglass and aluminum and plastic, abandoned and overlooked by eyes accustomed to ignoring them.

Many bear the marks of vandalism; many are broken. But as wandering through parts of Bangkok on Thursday found, the ubiquitous and familiar structures of line-based telephony have found new purposes.

Bangkok’s public telephone booths, 4,000 of which are slated for demolition, have become canvases for graffiti, message boards, garbage dumps, shelters for vendors and storage for merchants. Sometimes they even shelter the homeless, two-legged or four.

And some, despite seeming obsolete in the smartphone age, maintain an unexpected use: A few city folks were spotted inserting coins, dialing numbers, holding the comically large handset to their ear and speaking into it for a minute or two.

But our divorce from the phone booth past is inevitable. It wasn’t them – it was us. We became enamored of younger, more immediate and intimate technology.

While a cursory review finds payphones have been entirely removed in many countries, including Belgium, Jordan and Sweden, some cities have found creative alternatives. New York replaced them with Wi-Fi hotspots; Osaka turned some into goldfish aquariums. In London, some have been converted into solar-powered recharging stations.

In its announcement this past Monday, City Hall said it was removing them for the sake of a tidier city, saying that they either don’t work, block walkways or are illegally installed.

How many will be left remains unclear, but more details will be announced after district offices are notified and discussions held with the two companies which own most: TOT PLC and True Corp., according to Phuwadol Samankongsak of the Public Works Department.

Before they join gas lamps, horse hitches, street cars and newspaper racks as common urban sights swept away by time and technology, here’s a tribute to the telephone booth.