Home
Bangkok
Pratunam Market is next to be cleared – a tragedy for Bangkok?
Tweet Pin It

Pratunam Market is next to be cleared – a tragedy for Bangkok?

Pratunam’s Flashy, Trashy Fashion to be Swept Away

BANGKOK — The sidewalks of Pratunam, the nation’s biggest clothing bazaar, are the next target for the cleanup broom powered by a government tidiness campaign.

Nearly 700 street stalls will soon be gone from the area famous for affordable fashion as City Hall tightens up code enforcement and moves forward with its cleanliness and order campaign.

More than 100 street stalls located on the sidewalk outside an area where they’ve been allowed were ordered to leave by March 8, according to District Chief Chatree Wattanakhejon in Matichon Online. Another 576 stalls lawfully operating on the sidewalk will soon be forced out when the city revokes their permits to clear the sidewalks.

As has become a routine, authorities have prepared alternate sites for the vendors that many are likely to find objectionable. Three hundred vendors will be asked to move to a private market on Soi Phetchaburi 29, while a market in the Bang Kapi district can accommodate 1,000 vendors. A third at the Kuuk Kuk Tha Din Daeng Market can hold 600 vendors.

The biggest destination for clothes and fashion-related everything, Pratunam Market is known for selling at wholesale prices. It is situated in the heart of Bangkok at the intersection of Ratchaprarop and Phetchaburi roads in the Ratchathewi district.

District Chief Chatree said the reorganization plan was recently submitted to City Hall and vendors would have a later opportunity to discuss the matter.

Since the military government announced its policy to reclaim public space after it seized power in 2014, Bangkok has cleared a number of its informal markets well-known to both locals and tourists. The latest recently cleared spot was the famous Pak Khlong flower market.

The campaign has been met with cheers by those who want a tidier capital city and criticized by those who see a loss of its unique culture and attractions.

At present Pratunam Market sidewalk is closed every Monday and it truly looks like a sad, deserted, lonely and dirty ghost town. Is that what they have in mind for all of our precious City? I hope not, as will many thousands of tourists who come to the Big Mango to soak up their days wandering through these iconic markets picking up bargains along their way. 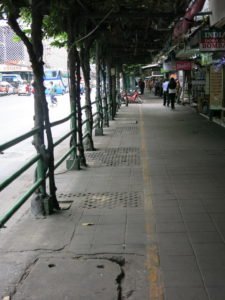 Here is an example of one of many signed and original Editorial Cartoons. The cartoons have all been published as Stephff’s View in The Nation Thailand and are unique & unusual pieces of art and history. All available for Worldwide delivery via our online store. 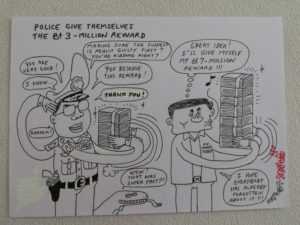