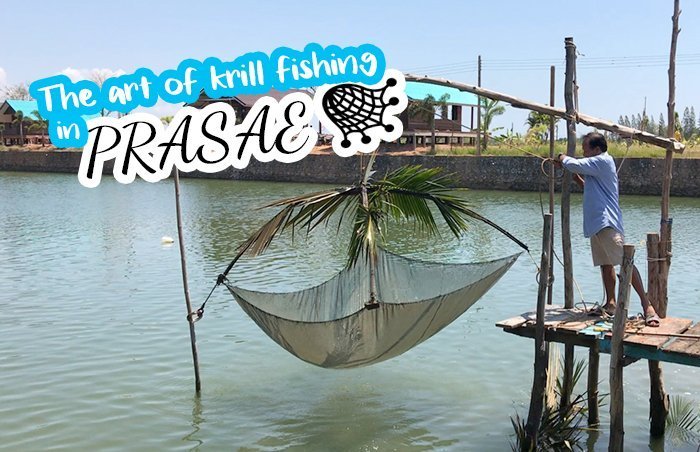 Prasae Rayong Thailand krill fishing. The 3rd article on a “Life less ordinary in Prasae” is about the krill fishermen and their methods of fishing this small shrimp which is used to make a fermented shrimp paste for use in making their wonderful chili paste which is an essential ingredient in Thai curries that gives it the unique flavor.

Prasae Rayong Thailand krill fishing. Prasae is a small coastal township that is as diverse in its economy as it is in their numerous edible delicacies. The community tourism in Prasae includes a trip to watch how these simple village folk live, their methods of fishing and making a snack called “jaeng lon” or grilled spicy fish paste.

Prasae Rayong Thailand krill fishing. The wooden boardwalks made of sturdy seasoned wood and stilts that support a walkway to the traps

This household is one of several in the community who harvest krill along the shores of Prasae. The fishermen folks are friendly and ever eager to show how they fish these delectable little shrimps. As you approach the household yard, you can smell the fermentation of seafood which is pungent and not unlike rotting seafood but is a step in the process of making the fermented shrimp paste. A short walk through will lead to the boardwalk made of old wooden planks on stilts with several lead ropes leading to traps in the water.

The krill traps made of bamboo sticks, netting, rope and palm fronds with a long rope tied to the middle top for easing and lowering of the trap into the water

These krill fishing traps are rather unusual and the design of the traps has not changed over the centuries when they were first used to fish by the ancestors of the village. Made of sturdy bamboo branches for the flexibility, a bit of netting (in those days it would probably have been woven cloth), rope for tying it all together and to hang it from a trestle on the boardwalk, palm fronds to shield and keep the krill and other marine creatures from getting out of the nets and some fresh bait mostly other pieces of cut up fish or prawns which are left in the middle of the net.

The trap is left in the water for a time

The whole contraption is dunked into the water and left inside for a time until there are small krill, prawns, fish and crabs which have been attracted by the bait are caught in the net.

The net is then raised from the water and the fisherman used a smaller net attached to a pole to scoop the contents of the net out into buckets. The contents in the buckets are then sorted and small fish or small sea crabs are mostly tossed back into the sea but the krill, larger crabs and large prawns are kept. This is a very arduous task as the nets are quite heavy to lift out of the water and the yield is not much per net. This process has to be done several times a day with many nets in order to be able to yield sufficient krill to be processed.

Prasae Rayong Thailand krill fishing. Fermented shrimp paste or known as “kapi” on the left and dried krill on the right used as condiments in fruit chili sauce and young papaya salads

It takes several days in order to be able to yield a 1 kilo bag of krill such as this one. This krill is still in the fermenting stage hence the light color. There will be several versions of this krill, of which one is the wet variety (to be made into fermented shrimp paste or known as “kapi”) and another is the dried variety which is used for different types of Thai chili paste (mostly you will see it in the chili paste for fruits) or in som tum (young papaya salads). All these sea produce in combination with different herbs and spices is what makes the much loved Thai curries from the Thai Green curry to the Massaman curry and every other Thai cuisine in-between which is a gastronomic delight.

Another interesting product which is a snack known as “jaeng lon” is actually the grilled version of the fried spicy Thai fish cakes you normally see in street food of Bangkok venues. The difference between this and the fried fish cakes are extra ingredients which changes its flavor slightly.

Prasae Rayong Thailand krill fishing. Ingredients such as fish paste, shredded coconut, shredded long beans (top left picture) are the start of the ingredients. All the ingredients are placed into a big mixing bowl and mixed well

The loaded skewers are then placed over hot coals to slowly grill until the spicy fish paste is firm indicating it is cooked. It is then served hot and eaten as is or with hot steaming fragrant Jasmine rice and a piquant chili sauce

Starting off with the basic fish paste, finely cut long beans, fine shredded coconut, sugar, chili paste, salt, and coarse shredded coconut is added to the mix. It is then all mixed together into a firm paste. Bamboo sticks soaked in water to prevent it from burning are prepared for the fish paste to be rolled around it. Once this is done, it is placed on a grill to be slowly cooked. While cooking, you can smell the wonderful aroma of the spices such as lemongrass, turmeric and coconut wafting into the air. It is cooked once it is firm to the touch inside and out and this snack is best eaten hot on its own or with steamed white Jasmine rice. It is particularly delicious eaten in the place where the ingredients especially the fish paste is super fresh compared to the ones you get in the city!

Life in this part of the village is idyllic and slow-paced with the village folk enjoying their break times after a hard morning in the sun working at the traps. Meals are simple consisting mainly of the seafood they produce such as salted fish which is fried till crispy and excellent with hot rice, sizeable fresh prawns cooked in a sweet and sour vegetable mix, a seafood soup called “kaeng som” which is a mix of various seafood in a broth made with tamarind juice, galangal, lime leaves and fresh or dried chili, a special pickled krill dish made of lime juice, onions, chilies, coriander known as “yum queair” and off course a simple sweet dessert at the end.

Comical village dogs with painted eyebrows can be seen vying for attention from visitors and waiting for a treat or two. The hospitality of these simple village folks transcends culture and language and there is no better way to understand their culture and lifestyle than to be part of their way of life even if it is just for awhile.