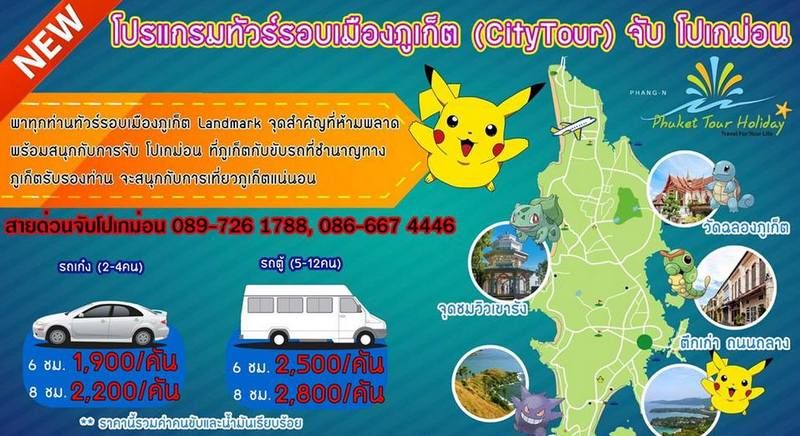 Pokemon Thailand. While the country struggles to contain the Pokémon Go frenzy, one Phuket tour operator has launched tours that allow clients to hunt down the prized critters.

Yongyuth Chankul, Managing Director at Phuket Tour Holiday Co., launched tours around the island to hunt Pokémon characters on Monday, just two days after the game was launched in Thailand.

“Many people are delighted that we came up with the idea to help them hunt for Pokémon at Phuket landmarks. We normally offer daily tours to these tourist attractions, so all we had to do was add Pokémon hunting to our package,” he said today.

“There are others in other locations, and people can search for them while on the tours,” he said.

“Now people can play safely because we provide drivers who know these roads well. Many people have called in and asked about the package since we launched it, but demand is high and people are urged to book in advance,” he added.

Looking to take advantage of the Pokémon phenomenon, Permanent Secretary for Tourism and Sports Phongphanu Sawetrun announced that his office is in talks with the copyright owner of Pokémon Go in Thailand about adding important tourist sites to the game to attract younger travelers.

However, a slew of complaints prompted the National Broadcasting and Telecommunications Commission (NBTC) to lay down four restricted areas where players may not go nationwide: state properties, temples, private zones and dangerous areas including roads, waterways and railways.

Pokemon Thailand. The controversial game has already divided most people into either Pokémon Go ‘love it’ or ‘hate it’ camps.