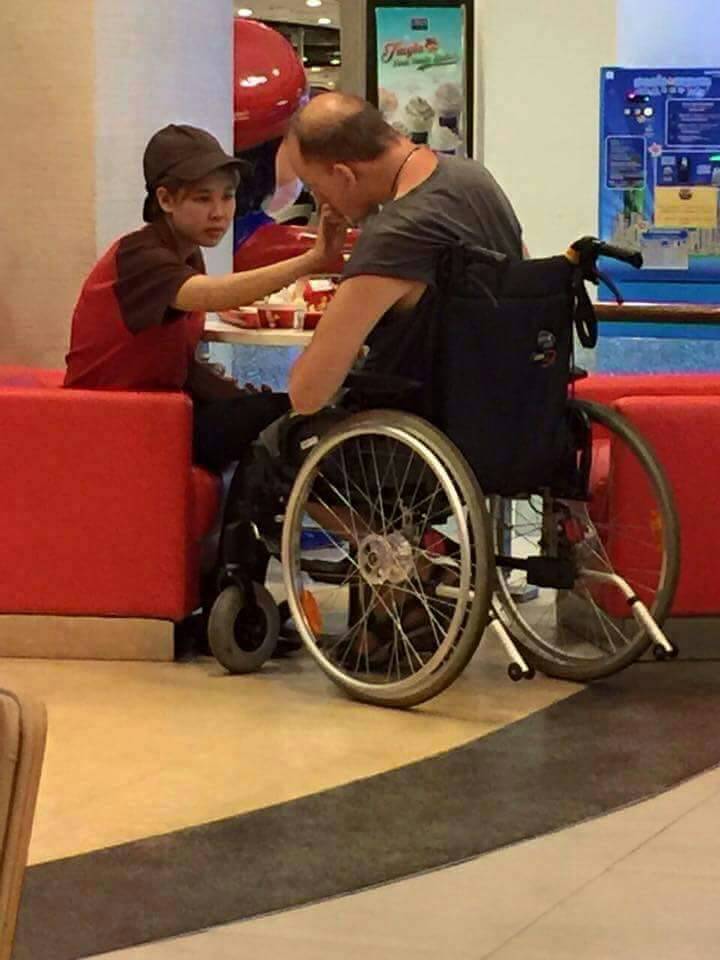 Pattaya KFC girl feeds disabled man. On Monday we met the KFC Worker who was photographed helping a disabled foreigner to eat at her restaurant in Central Pattaya last week.
The picture of her assisting the foreign man went viral on Facebook and even made the national news on various Thai TV channels. We met with the 18-year-old Fast Food Restaurant worker on Monday to find out more.

Khun Rasadree works at the KFC located on the Ground Floor of Central Festival Pattaya Beach and confirmed the picture of her feeding the foreigner was taken on 26th December, although she revealed he had been at the restaurant on 25th December and was fed by another of her colleagues but no one took a photo of that encounter.

The foreign wheelchair-bound man, whose name and nationality is unknown, had ordered a Chicken Meal worth 199 Baht, but he only had 100 Baht in his pocket. The team at KFC clubbed together and paid the extra 99 Baht.

Khun Rasadree noticed the man was struggling to eat the food due to his disabilities and left her station to assist the man in consuming his food.

Khun Wandee aged 36, the Store Manager, praised her kind-hearted staff for helping the man and we understand Khun Rasadree has been nominated for a National appreciation award.

This really is a heart rendering story of a very kind girl that too the time to help a foreign tourist when she saw him struggling to eat his food. She thoroughly deserves the award that she has been nominated for.